The failure of the relay regulator is the most common cause of malfunction of automobile generators. That is why, with a check of the regulator, they usually begin monitoring the operability of the generator nodes. 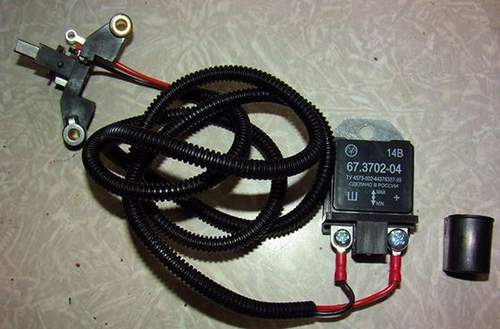 In most cases, this can be done independently even without removing it.

Principle of operation of the generator voltage regulator

The generator is one of the most conservative car components. The circuit developed in the mid-60s has remained virtually unchanged up to the present day with the exception of the element base.

In general, the diagram of a car generator can be represented as follows:

It contains the following main nodes:

The general principle of operation of alternators was invented by the ingenious Tesla. Direct current through the field winding induces a magnetic field. During rotation of the excitation coil (armature), an alternating voltage is generated in the stator winding inside the stator winding.

This voltage is converted to constant by a rectifier made on the diode bridge 5 and 6. The rectified voltage charges the battery.

What function does the relay regulator perform? Essentially, it is a feedback amplifier. That is, as soon as the voltage rises, its circuit reduces the current through the field winding.

Relay regulators classify on the element base of execution:

In modern cars, devices that are combined with brushes are most often used. This has its drawback: when the brushes wear out, you have to change the relay regulator. Conversely, failure of the relay controller can lead to the replacement of healthy brushes.

Some experts change only the brushes located together with the relay regulator. This is not the best option for reasons of reliability, especially since the cost of relay controllers of common cars is not so great and may even be lower than the cost of replacing brushes.

The main causes of malfunctions of the relay-voltage regulators of generators are considered:

See also  What Is An Impact Screwdriver For?

The consequences of a faulty relay controller can be significant:

The very first sign of a malfunction is the absence of a glow of the control lamp (indicator) on the dashboard when the ignition is turned on.

In age-old cars, where the battery charge pattern is similar to that shown in the first figure, it is too early for motorists to panic. Perhaps it was just a blown out bulb or a broken contact, and these cases are quite common. Car owners remove the generator, driven for testing, but in vain.

The second sign. The “battery” indicator does not go out after starting the engine. This already indicates a violation of the charge process and a possible malfunction of the generator.

Another symptom of a malfunction. The brightness of the dipped-high beam depends on the engine speed. By the way, such a check is recommended to be done regularly. For this, it is necessary to stop in the dark at night in an uninhabited place opposite a building and to neutralize at the neutral by switching on the main beam. A change in brightness indicates possible problems with the charge system.

The smell of a burned winding in the cabin is also a sign of a malfunction of the generator, but you can not feel it.

Video. How to check the relay-regulator without an adjustable power supply:

Sometimes there is another for controlling the tachometer. You should ring the control wire to ground. Resistance below 10 ohms will also indicate a malfunction of the relay regulator.

The following checks should be carried out on a relay-controller removed from the generator. In most cases, this can and should be done without dismantling the generator. The control relay is usually mounted on the generator with two or three bolts or screws.

After that, you need to assemble a simple scheme.

Or its other variant

As a light bulb, you can take an ordinary salon lamp. Its glow will indicate the serviceability of the relay regulator. The removed relay should also check the condition of the brushes.

On the Internet you can find verification schemes for almost any type of relay-regulator of voltage generators.

In the event that the results of the test turned out to be negative, the regulator should be changed. Usually its cost does not exceed 2000 rubles for common brands.

General recommendations for repair and maintenance

At the slightest suspicion of a malfunction of the battery charge system (changing the brightness of the lamp, blinking of the indicator lamp, difficulty starting the engine, overheating of the device and others), you should immediately check the generator’s operation, especially in the cold season.

In order for the generator to last longer, follow the following simple rules:

And let your generator last longer!

You should know what the resistance of high-voltage ignition wires should be when replacing them.

Not everyone knows what you need for self-diagnosis of a car.

Video. How to check the VALEO generator voltage regulator in Renault cars:

Very often, these regulators are assembled with a brush assembly, at least half of all modern generators that bring me to repair this way. And they change when the brushes wear, so no one will check or even repair it now. And the generator brushes may well take care of ten years. Earlier, even when everyone was driving in the Zhiguli, Muscovites and Volga, there were relay, and later transistor relay-regulators, they were soldered and moreover they were quite successfully repaired. And now even the car itself, in which case indicates a malfunction with a check-engine lamp, it remains only to consider the error and change it.

Well, firstly, before you climb somewhere, you need to look at the voltage on the battery with the engine turned off and compare it with the running one. With a normally charged battery, it should be close to 12.6 volts with the engine off and 13.5. 14.5 volts with the engine running. Then we leave the multimeter turned on parallel to the battery terminals and sequentially connect all the loads: the stove fan, dipped beam, high beam, radio, fog lights and everything else. We look at the multimeter, the voltage should drop very little, I have from 14.3 delivers up to 14.1 volts. According to theory, it can drop to 13.5 volts (depending on the power of the generator), but not less. Now, if it drops sharply, then we are engaged in a relay regulator.

See also  How to remove the lock from a Bosch stove

There was a time checking the relay-regulator using a charger. The principle is this: we take a charger with adjustable load, a rechargeable battery, a 12 V lamp and wires, of course. We connect the charger to the battery and to the same wires the relay-regulator. We connect a lamp to his brushes, it is better to use small crocodiles so as not to damage the brushes. Under normal voltage, the lamp will light. We increase the voltage using a charger and at a threshold of 14.5 V the lamp should go out. When voltage decreases, the lamp should light up. If everything is so, the relay-regulator is working properly. This method is applicable to all types of relays. With or without brushes.

Undercharging or recharging, and hence the boiling of the battery, are primarily associated with the operation of the generator relay regulator. If you overlooked this moment, then most often it leads to battery failure. Therefore, monitor the state of the battery. How the car starts after a night’s parking, if there are any white streaks on the battery, if it is time to check the relay regulator.The relay regulator is just a voltage regulator that does not allow to exceed the threshold of 14.5 V. There are two types with the same principle of operation: one combined with brushes and mounted on a generator, the second separate on the car body.There are two ways of checking without removing from the car and checking the shot.Without taking off the car, you can notice the failure of the relay by indirect signs or undercharging or overcharging. In case of undercharging, you do not start the engine; when recharging, traces of electrolyte boiling out.But the most correct method is to use a multimeter, and the most accurate one is to measure the voltage on an unoccupied machine on the battery and compare it with the engine running. It should be 12.6.12.7 on the unknowing, but if exactly 12 you have already undercharged. With the engine running 13.2. 14.5. If more, then change the relay regulator.However, the relay-regulator is not always to blame; failure of the generator is possible. If the regulator is not in the generator, then simply change, if the brush assembly, then remove the generator.

I remember, at Niva, I had problems with the relay a couple of times and both times the diode bridge pierced. What is the specific reason I didn’t find out then, especially since the generator soon completely “died”.