How to thread an inch on a lathe

Universal screw-turning machine model 16К20 is designed for carrying out various turning and thread-cutting operations. The machine is capable of tapping threads of various profiles on inside and outside cylindrical and conical surfaces using chisels, taps and dies. The machine uses main motion chain and threading chain when threading with chisel and die, and only main motion chain when threading with tap and die, since the tool is fed by self-tightening. Technical characteristics of the machine 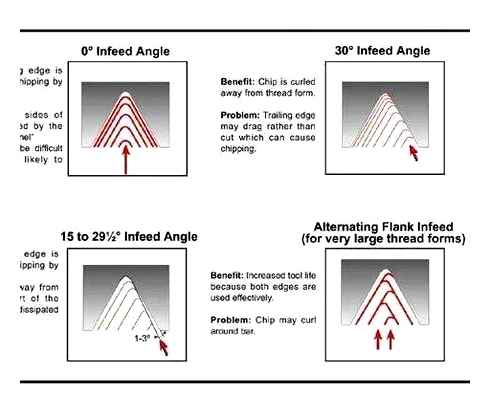 Machine base 1 serves as a base on which all major units of the machine are placed. Spindle headstock 4 with gear-box for changing spindle speed and feed box 3 for changing longitudinal and cross feeds and thread pitches are rigidly fixed on machine base 1. On the bed guides move the carriage 8, on the guides which is mounted cross slide 7 with a four-position tool holder 6, and to the bottom of the carriage is attached apron 2 to control the movements of the machine. Rear headstock 9 is intended for supporting long workpieces during their machining in centers, as well as for fastening drills, countersinks, reamers, taps and other tools in it. Rear headstock on bed guides is moved manually and fastened in required position with the help of eccentric clamping. Machine is operated by means of handles and electric panel 5.

Kinematic diagram of a 16K20 screw-cutting lathe is shown in Fig. 46.

Motions in the machine: main spindle rotary motion, longitudinal and transverse feed motions of the slide, manual and rapid movements of the slide.

Without directional guidance, threads with left-hand direction are cut. It is regarded as standard. The tools used are the same. Change to reverse rotation and the cutting edge is inverted by 180⁰. the slide is brought from the opposite side.

Gear profile in section has different forms. Used types of threads made on lathes:

Tap bits and taps for threading

The design of the lathe allows you to cut both internal and external threads. Many varieties of cutters have been created for this purpose, all of them belonging to three big groups:

Rod type is the simplest type of cutting tool. It is a rod (of any cross-sectional shape) with a working head. Profile is determined by the shape of the head. One type of stick cutter with soldered carbide faces. They are more resistant to wear and do not require frequent sharpening. Round and prismatic are in the shaped category.

Prismatic cuts only the outside. Capable of tackling large surfaces compared to picks. The cutter is held in the toolholder by a dovetail. Capable of more resharpening than shank type.

Round taps perform male and female threads. They are more convenient to cut and have a wider range of applications than prismatic ones. They can be re-turned a greater number of times. They are set in a holder relative to the face and the hole.

Varieties and uses of taps

Internal threading can be done by hand or with different types of machines (boring machines, lathes, etc.).). The working tools that do the basic work of tapping internal threads are machine-hand or machine taps.

Taps are divided into different types depending on a number of parameters. The following principles for classifying taps are generally accepted.

A good tap is made of quality tool steel, looks neat and has evenly turned threads and grooves

Threading on a manual lathe BEST TECHNIQUE EVER !!!!

Taps are generally used for tapping metric threads, but there are tools that can be used to tap pipe and inch threads. In addition, taps also differ in the shape of their working surface, which can be cylindrical or conical. 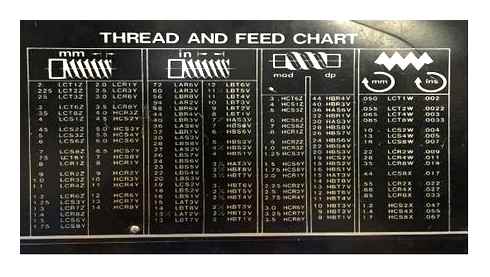 Thread quality affects the secure connection of parts. Thread-cutting is a job that requires precision, skill and experience.

Thread milling cutters are required for tapping with the lathe. They are made of high-speed steel, and the requirements to their characteristics are stipulated by the corresponding GOST (18876-73). Such cutters are subdivided into the following types according to their design:

See also  How to cut an even circle in plastic

A helical thread groove on the surface of the workpiece is tapped with a bent or straight pick, and the formation of internal threads requires straight and curved tools which are fixed in a special mandrel. The apex of the pick, which is used for thread cutting, must have a configuration that fully corresponds to the profile of the thread to be threaded.

When forming threads with a pick, a number of features of such technology must be taken into account.

Types and properties of cutters

In practice, internal and external thread picks with a rectangular toolholder are used. Less common are disc, prismatic, and front surface sharpening. All have an operating profile corresponding to the size of the helical groove. According to the direction of the spiral to be cut, left-hand and right-hand.

A distinction is made between solid and prefabricated tools. The former, predominantly made from high-speed steel, are small in cross-section or disc-shaped. The main mass is fitted with cutting inserts that are brazed with refractory solder or mechanically replaced if wear occurs.

Thread cutting on a lathe

Thread-cutting on the lathe is possible with the help of various tools. The most common tool used for this purpose is the cutter. The procedure requires a proper choice of threading technique and selection of the right type of tool. To create threads on a lathe, you need to monitor the quality of the result and make further adjustments if necessary.

The most commonly used method of tapping with picks is on screw-turning lathes (Fig. 4.45). Thread cutters are rod, prismatic and round; their geometrical parameters do not differ from those of profiled cutters.Tapping of triangular threads is carried out with picks with an apex angle of ε = 60° ± 10 for metric threads and ε = 55° ± 10 for inch threads. Because of the inaccuracies in the support movement, which can increase the thread angle, picks with an angle of ε = 59°30 are sometimes used. Pick apex can be rounded or chamfered (according to the shape of the recess of the thread).

Threading in the hole is carried out either immediately after drilling (if the accuracy of the thread is not highly demanded), or after boring (for precision threads). Diameter of the threaded hole (mm)

where d. outside diameter of the thread, mm; P. thread pitch, mm.

In the process of threading bolts, studs and some other parts, thread runaway tends to form when the pick is withdrawn.

For more convenient and precise thread cutting, an undercut of 23 mm in length, the diameter of which equals the internal diameter of the thread, is made at the end of the workpiece. This ledge is used to determine the last pass of the pick and it is cut off after the thread-cutting process is complete.

The accuracy of the thread depends to a large extent on the correct positioning of the cutter relative to the cutter line. To set the cutter along the bisector of the thread profile angle perpendicular to the workpiece axis a template is used which is positioned on the previously processed workpiece surface along the bevel line of the machine centers. The cutter profile is aligned with the template profile and the correct positioning of the tool is checked along the clearance. Threading picks should be set strictly on the mowing line of the machine’s centers.

On screw-turning machines threads are cut with cutters in several passes. After each cutter pass the pick is returned to its starting position. By the nomius of the slide transverse motion feed screw set the required depth of cutting and repeat the pass. When threading with a pitch up to 2 mm the feed rate is 0,050,2 mm per revolution. If a thread is cut with two cutting edges at the same time, the chips that are formed become tangled and the quality of the thread surface is deteriorated. This is why the cutter is moved 0.10 or 15 mm alternately to the right or left before a pass, using the movement of the upper slide, so that only one cutting edge is tapped. The number of roughing passes is 36 and the number of finishing passes is 3.