How to Unscrew the Angle Grinder Nut Bitten Disc

Angle grinder, or as it is called more popularly and popularly, angle grinder, nowadays an indispensable and very useful tool. Without him, neither there nor here! And if it suddenly fails, then you have to dodge in every possible way, look for alternatives and think about restoring the tool. At the same time, it is impossible to use the angle grinder for its intended purpose due to a kind of simple lining when the disc is not unscrewed. Rather, the nut that holds this disk is not unscrewed. Here you can “break firewood”, namely bend or break the key, damage the lock button, break the case, but never unscrew the ill-fated nut. So, we will immediately warn you, if it’s not too late. If you suddenly do not unscrew the nut holding the disc with a key, then you need to change the tactics. And it is precisely the cardinal way of unscrewing that our article will be devoted.

I will say, perhaps, a well-known truth. Bites nuts more often on angle grinders with a significant disk size, say 150-180 mm or more. The thing is that the resulting torque, in the case of a disk impact at the moment of cutting start, is much larger than for a disk, say 125 mm. As a result, the nut inertia tightens so much that it is very difficult to break it off by ordinary and familiar methods. Now about the special ways.

So, if there is no way with a key, even if you insert it and slightly hit with a hammer, then we begin to use something more serious.

The first thing you can try, but again without fanaticism, is to take the rod, insert it into the holes on the nut and using a hammer, slide the nut in the direction of its unwinding. The main thing here is not to break the button and not tear openings, as here

See also  How To Make A Key For An Angle Grinder 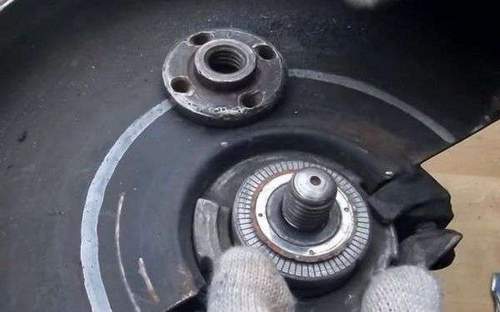 The second thing that many people advise is to warm the nut. Warm up the nut. In the end, it is a little, but physically still obliged to expand. Resizing may or may not help.

How to Unscrew the Angle Grinder Nut Bitten Disc

You do not have to pull it to the extreme until the stopper of the hold button from scrolling or the button itself bursts. In this case, it is not the tool with which you unscrew that breaks, but often the body is the angle grinder.

The third method is the most effective, and oddly enough, one of the safest for the angle grinder itself.We take off the edges of the disk on the nut.

Next, we use a thin metal plate or another disk (thinner), and maybe a second angle grinder with a disk. In this case, a broken disk must be turned either by a plate or by a disk. We try to sharpen the disk so as not to damage the nuts holding this disk, because they will still be useful to us. So we sharpen the whole broken circle until we sharpen it and the nut is unscrewed.

If you will use a second disk or metal plate, it is best to insert them to hold in a vice. Since holding such objects with your hands is dangerous. This method is the most effective!

And a few words about the prevention of such unpleasant precedents again. You can use small cardboard gaskets by inserting them between the disk and the nut. In extreme cases, use a smaller diameter disc, unless of course the nut is twisted on top. As a result, it will be possible to unscrew such a nut without problems. It will not be clamped; it will not bite on the thread.

And another small on a topic about a problem that I studied from my own experience.