How to Weld a Band Saw Blade

For the normal operation of the band saw, it is subjected to welding. The method by which this process is performed is selected individually, in accordance with the characteristics of the operation of this material. About equipment for welding band saws, we will consider further.

There are a large number of various saws that have individual characteristics of use and a peculiar design. In some, a disk is used as a cutting tool, while in others, a tape.

Installation of the sawing tape is carried out on the pulleys of the leading and driven directions. To pull it, great efforts should be made, only in this case, the cutting line will be uniform. 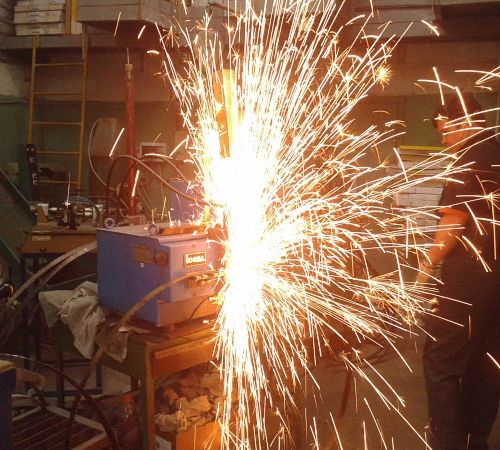 The main features of this design are individual blocks, which are supplemented and expanded independently. On a simple device, the material for cutting into which is supplied manually, additional mechanisms are installed, such as an electronic system for monitoring the operability of the device, thanks to which it works without outside human intervention.

Among the main structural elements of the band saw, we note the presence of:

Also, each saw is distinguished by individual structural elements, such as enclosures for fencing, and thrust mechanisms that increase work safety. In order to regulate and adjust the work on the work surface there are slats that are marked.

The principle of operation of the mechanism is based on the laying of a log between two guides and its rigid fixation. To determine the thickness of the board, it should be raised using a special mechanism.

DIY welding of band saws with your own hands

In order to connect the two ends of the band saw, they should be welded. This process is performed using special equipment for welding band saws. Resistance welding of a band saw consists in the fact that electricity passes through two connected ends of the saw, which leads to their overheating and melting of the edges on the blade. For current supply using electrodes connected to the clamps.

There are a huge number of welding machines with which resistance welding is performed. Some advanced options are able to provide automation of the welding and annealing cycle. Therefore, errors associated with excessive welding or the wrong time during which a pulse is transmitted are excluded. In a simpler mechanism, the control of the annealing and welding feed is done by the operator.

Self-welding of a band saw is possible only if you have experience with this kind of equipment. Among the main design features of the machine for welding band saws, we note the presence of:

Do-it-yourself welding of band saws consists of the following steps:

First stage. Cutting, involves determining the size of the saw. In order to cut the required section of the blade, use guillotine shears or a cutting wheel. When using a cloth that was previously welded, about five centimeters are cut off on each side.

In this situation, when performing cutting, a number of rules should be taken into account:

Only in this case, the canvas will have an even line on the bend.

A fairly simple way to perform cutting is laying the saw in a certain position, trimming and mopping each of the ends individually. In this case, even if there is no perpendicular cut line, its end sections will still be docked. In this case, the web after welding will differ in an even seam.

Further actions are related to the execution of stripping. These areas should be cleaned of dirt, degreased with acetone or alcohol. Use abrasive to strip edges. As a result, perfectly smooth and smooth areas should be obtained.

Next is mounting the canvas on the surface of the apparatus. The prepared saw should be installed inside the clamping mechanism. At the same time, one part of it remains mobile, and the second. Not. In the central part of the edge of the saw are interconnected. Edge matching should be perfect.

Using the control knobs on the device, the force, stroke, shrinkage, and device operation mode are regulated. These parameters for each saw are selected individually and depend on its size, steel thickness, operation characteristics, etc. With an increase in the cross section of the saw, the amperage required for welding increases.

In order to more accurately determine these parameters, use the instructions for the device. It should have a table according to which the operating mode of the equipment should be determined. In some devices, it is enough to select only the welding mode, without indicating the current strength and voltage for operation. In order to weld the saw, it is necessary to set the lever in a certain position.

Band saw welding is done by pressing a button or turning a lever. After that, a current is supplied to each clamp, and a saw is transferred from them. Thus, the metal in the joining zone of the two sections is melted and connected to each other.

The spring acts on the surface of the movable clamp, which is shifted to the fixed clamp, on the draft. At the same time, in the butt zone, a weld bead is formed with which the saw is connected.

Determining the parameters of welding, you should choose the time for which the supply of current pulses. Welding machines with automatic operation shut off the current, after a few seconds from the moment of their supply. However, if this parameter on the welding machine is manually adjusted, then it is necessary to monitor it.

In the process of welding, certain difficulties arise associated with the material from which the saw is made. In accordance with this parameter, the operating mode of the welding machine is determined. In some cases, without experience, determining this parameter is very difficult. If in the end the welding did not satisfy you, then you should experiment, choosing the necessary mode for unnecessary cutting of the canvas. After selecting the optimal operating mode, write down its parameters in order to apply it in the future.

Note that the electrodes that come in contact with the saw must be clean. Foreign substances or dirt on their surface, adversely affect the quality of welding of the saw.

Further actions are related to performing annealing, which helps the metal, which has become brittle and rather hard during welding, gain strength, toughness and ductility. For the annealing, the same clamps are used as in the welding process. However, a different current supply mode is used for operation.

If there is no pyrometer on the welding machine, then the temperature is controlled by the external characteristics of the metal surface. During the firing process, the steel acquires a red-cherry hue. In no case do not heat the metal to orange or even more so saturated red. The process of gradual cooling of the metal takes no more than five minutes. Some canvases require two annealing cycles. In some cases, welding and annealing are performed in one process. In this situation, the time for cooling the seams is increased by periodically supplying current to the metal.

After welding, the blades should be cleaned from the influx formed on the weld. Almost any tool with abrasive characteristics is suitable for stripping seams. The main condition for quality stripping. Getting a flat and smooth surface.

We offer you to familiarize yourself with the main errors that occur during the welding process:

1. Offset welded edges. In this case, the canvases are in different planes. This problem occurs when there is insufficient current strength during the welding process or with a very large draft.

2. The melt located on the web is observed in the process of supplying a very large current.

3. Non-digested areas are formed if the pressure supplied to the system is too low.

The minimum value of the protrusion of the seam on a qualitatively boiled stove is about one and a half millimeters.

To check the quality of annealing, the sheet is bent in a radius of twenty centimeters and inspected. If the arc resembles a standard circle and the seam remains intact, then the welding quality is at the proper level.

The cost of welding band saws is determined primarily by their size, thickness of steel and features of operation. However, there is another way to connect the saw. This is soldering. This option is easier to perform at home than welding.

First of all, the blade should be prepared, for this the saw edges are cleaned of dirt and degreased. The ends of the canvas are connected in the butt position, but the edges must be beveled.

In order to give the faces a bevel shape, use an abrasive wheel. The optimal bevel value is from eight to twelve centimeters. The chamfered areas should be connected as evenly as possible.

In order to solder the saw, the presence of solders is required, the best option. Silver PSR45 or PSR65. Solders with a lower silver content are not recommended.

As a flux, it is preferable to use a paste that is used in the process of soldering metal. This version of the flux is convenient. In the absence of this substance, a variant of its independent manufacture is possible. For this, ammonium chloride is combined with borax in a ratio of one to ten. With the help of water, the consistency of the composition, which should become pasty, is regulated.

To heat the saw during the brazing process, use a gas burner. The heating temperature is determined by the type of solder, the optimal value is from 650 to 600 degrees. Do not overheat the metal so as not to disturb its structure. Using a special device, the ends of the saw are interconnected. The soldering process is as follows. First of all, apply flux to the surface of the edges. Try to apply the paste exclusively on mowed areas.

Further, the joints are heated to a certain temperature and solder is fed to the junction of the ends of the saw. After that, a strip appears on the surface, indicating that the soldering is performed correctly. Solder melting is performed not under the influence of the burner, but from a previously heated metal. After a few minutes, the metal cools, only after that, the saw is removed from the mechanism. In the presence of small sagging, the seam is cleaned with any abrasive material.