How to wind line on the electric grass trimmer

It is stored on the top of the grass trimmer body.

In addition to the standard lawn line, my trimmer also has a thick line for cutting rough weeds. It has the shape of a pigtail, i.e. three lines are tightly intertwined. This line has its own spool.

It is very simple to install such a fishing line into the reel. according to the internal scheme inside the reel. We insert the center of the line with a metal mount in the upper part of the reel, and draw the ends of the line along the grooves and bring it out. 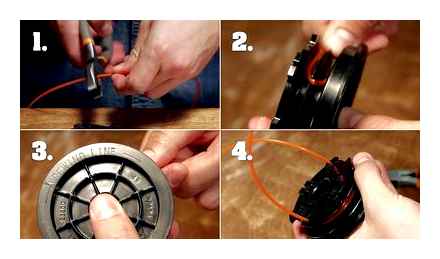 Tucking the line into the grass trimmer.

I want to devote today’s article to the sore subject of summer residents and gardeners of the entire post-Soviet space “How to fill the line in a grass trimmer.” Not many trimmer manufacturers answer this question in their instruction manuals. Therefore, it is also difficult for simple gardeners to figure out how to do it correctly. 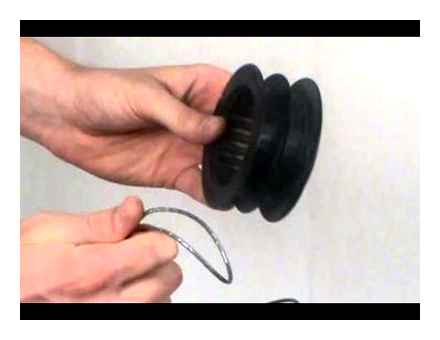 So, grass trimmers are electric and gasoline. The cutting element for trimmers can be a line and a knife. The fishing line is ordinary, four. pentahedral and intertwined (in the form of a pigtail). Knives come in 2, 3 and 4 bladed knives. Knives also come in plastic and metal.

The line feed system from the grass trimmer is manual, semi-automatic and automatic.

Development engineers who create new models of trimmers accurately calculate the diameter (thickness) of the line and the number of knife blades, according to the power of the trimmers. Otherwise, the engine is overloaded, resulting in damage to the engine. And these are additional and significant costs.

Grass trimmers on the market today:

Our Kulibins have long ago learned to improve any mechanisms. So, for example, some gardeners make successful, in their opinion, replacement of fishing line with a metal cable, or fishing line. But at the same time, they do not think about the safety of their own and their loved ones, because a cable with the power of a working grass trimmer can easily break out and not only injure the mower and others, but leave him crippled for life. Using a fishing line can and gives a better effect, I have never personally tried it than a line for a grass trimmer, but this work has a number of inconveniences: when it comes into contact with hard objects, it loosens or can simply be pulled out of the reel without limit.

So, what is called closer to the topic. Here is an example of how to tuck the line into a grass trimmer (Bosch Art 30 grass trimmer). Everything is very simple. Started.

After you have chosen the line for refueling, you need to cut off the required amount of line, because all the line in a skein will not be wound into a reel.

They took it off. We fix one end of the line in the gap and carefully and evenly wind the line.

The amount of line should be such that the protective cover of the reel closes and the line on the reel unwinds a little by itself.

We put the other end of the line into the hole on the protective casing.

Putting it all on a grass trimmer. Turn the coil clockwise until it clicks.

Heavy-duty line in a reel

This reel is attached to the grass trimmer in the same way as a reel with an ordinary line.

auto feed grass trimmer: how to wind the line into the removable spool

In some models of trimmers, a reel is installed, in which the line is refueled automatically. It is enough for the owner to fix the ends in the head, after turning on the equipment, the mechanism will perform all the winding manipulations on its own.

You should know this! The strengths of the automatic grass trimmer head include the ease of winding. The disadvantages of such equipment are frequent breakdowns of a complex mechanism and high cost. 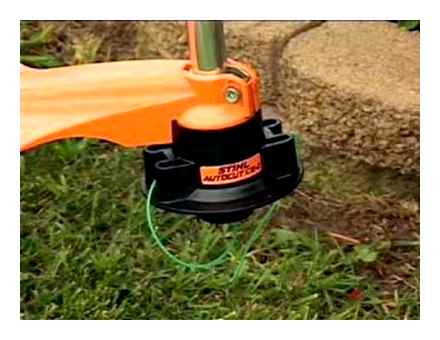 Before putting on the line on the grass trimmer, you need to pay attention to the section of the cord:

Important! Most wear-resistant consumable is 2-piece round, reinforced internally.

The owner of the brushcutter should know that it is strictly forbidden to use metal wire, fishing thread and various strings.

How to wind the line correctly: replacement features depending on the type of removable grass trimmer coil

To figure out how to thread the line into the removable trimmer head, the following recommendations and video instructions will help.

Remove the head before replacing the old line with a new one in the detachable spool of the grass trimmer.

The process is completely simple, even beginners can do the job:

To correctly determine how many meters of fishing line is required for a particular reel, it is necessary to wind it on the bobbin so that the skein does not exceed the diameter of the sides. If the line sticks out over the edges of the spool, you will not be able to insert it into the casing. After you have decided on the length of the material, it must be threaded into the bobbin, so do the following.

Although winding the line is a very simple task, many beginners can wind the line incorrectly. Below are the most common mistakes.

It is quite common for beginners to make mistakes, so you need to follow the tips given in this article.

See below for how to replace the line on the Patriot trimmer.

Most often, a thread up to five meters long is used. The procedure consists of the following steps:

Many owners and specialists note the ease of use and ease of refueling the bobbin with one mustache. Depending on the manufacturer, the length of the threaded line can vary from 2 to 5 meters. The end of the line is inserted into the head into a special technological groove or hole, and the winding is carried out in the direction opposite to the working rotation of the bobbin. Most reels have arrow marks on the outside of the body that indicate the direction of travel of the grass trimmer reel.

After winding, you need to leave a free end of 15-30 cm to enhance the centrifugal force, which is decisive when removing the trimmer line in automatic and semi-automatic spools. We pass the left end through the working hole of the coil and assemble the head.

See also  Trimmer what to put instead of fishing line

Preparation for winding the line

Before the winding process, it is necessary to remove the spool with line from the body. Depending on the manufacturer, power and type (electric or gasoline), there are three design types of trimmers:

This model provides the ability to install a knife. Removing the coil in such models is done by means of two keys recessed into the coil body. To mount the trimmer knife, it is necessary to align the hole of the reel and the rod, and then insert the device in the form of a steel pin (screwdriver, iron bar). After fixing the coil, the body can be easily unscrewed by hand in a clockwise direction.

How to wind line around the spool of a grass trimmer: key points

A gasoline or electric grass trimmer is an indispensable tool in the arsenal of a modern summer resident or owner of his own home.

Thanks to these gardening devices, even a large garden plot can be mowed with ease. After purchasing this tool and performing several mows, many people think about how to properly wind the line on the reel of the grass trimmer. For an inexperienced user, the first operation to replace it will seem problematic and time-consuming, since the developers often do not fully reflect the instructions for replacing the fishing line in the operating manual.

After removing the spool from the spool body, we determine the number of strands for winding the line (1 or 2). There is no fundamental difference between bobbins with one and two grooves, but if carelessly threading into the twin groove, there will be operational problems. Due to the likelihood of interlacing adjacent lines of the tool, a situation may arise when, after wear of the working antennae, it is impossible to remove new ones.

Regardless of the number of streams, a fishing line with a length of 1.5 to 3 meters is taken for refueling. Winding must be done in the opposite direction to the rotation of the head, since winding in the direction of travel will lead to the fact that the line will not be removed from the reel. After the fishing line is tucked into the grass trimmer coil, thread the free ends (15-30 cm) into special holes. Next, we assemble the head in the reverse order of disassembly and check the operability. Do not worry if the ends of the two antennae are very different in size, because when you start the grass trimmer, the knife installed on the protection will cut off the excess.

Winding the Line to the Grass Trimmer

Measured and accurate dismantling of the spool from the spool of the grass scythe makes it possible to go directly to the winding of the line. The design features of the head, the number and location of the fixing holes dictate the sequence of actions when performing this operation, and also determine the methods used. Today there are several types of reels, depending on the number of line antennae and the methods of threading it:

Some models on the market have a reel with an automatic winding mechanism. It is enough for the owner to properly thread and fix the ends in the head, and the winding operation will be performed by the tool itself when it is turned on. It is almost impossible to wind the line incorrectly in a grass trimmer with such a head, since the coil independently determines the position of the antennae. The advantages of the automatic grass trimmer head include ease of threading the line, and the disadvantages are frequent breakdowns of the mechanism due to the complexity of the design and high cost.