How to wind the line correctly on the Huter grass trimmer

Getting ready to change 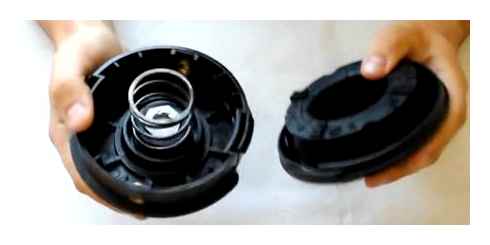 To make it clear, the mowing head (bobbin) was removed from the brushcutter. To change the line it is not necessary to remove it, everything is done in place. This does not take long.

Disassemble the grass trimmer bobbin. it is held on the latches. To remove the cover, press the catches on the latch. If there is not enough force to do it by hand, a screwdriver is used.

The bobbin is made up of the following parts:

The principle is as follows. Pressing the button, the spool presses on the spring and comes out of the fixing grooves in the cover of the bobbin. Holding in this condition, you can twist the spool, thereby adjusting the length of fishing line. When you release the button, the body spring returns the reel to its original locked position.

These holes are needed to fix the line when changing it. After winding the fishing line on the reel, the ends of the latter are inserted into them. This is to prevent the scaffolding from unwinding when the reel is installed in the grass trimmer body. In other words, it makes it easier to change the line.

There are some models that do not show the diameter of the consumable. Then in order to find out what maximal line diameter can be used, the line is adjusted according to the holes in the line lead out of the weed trimmer bobbin case (see Operating Instructions). figure below).

The reel has two sections for the line, separated by a partition. They may not be. They are only needed to distinguish and facilitate the winding of the consumable.

At first, the necessary line length is determined. The latter is wound into one of the sections of the reel so that it does not extend beyond its limits. In this case it was wound 3 mm, the length was about 2 meters. Т.е. for two sections you need a 4-meter section. this is for the 1st method. For the second method you need two pieces of 2 meters.

Now we need to figure out which side we need to wind it. For this purpose, many trimmer manufacturers put special markings on the bobbin such as in the figure below.

If such designations were not found, then you need to pay attention to the body of the bobbin. There is obligatory an arrow which indicates the movement of the mowing head. The fishing line is wound in the opposite direction.

The prepared piece (in this case it’s 4 meters) is bent approximately in half. one piece should be 15-20 cm longer, and inserted into the special slit on the divider.

See also  How To Disassemble A Fishing Line On A Trimmer

there are designs that do not allow the spool to be divided into two sections. This does not change anything, the line is wound in a similar way. Just make sure that the line segments do not overlap.

The section at the bottom of the reel should be the first to finish, i.e.е. the one closest to the fixing holes.

This piece of line should be inserted into the hole of the correct diameter. The line is securely fastened.

The long piece is wound in another half turn. There it is fixed in the same way. At the same time, the length of line crosses over the other section of the reel.

The fixed ends of the wound line are inserted into the holes in the body of the grass trimmer bobbin.

The reel is placed against the housing. The ends of the line are tightened firmly so that the line, which was previously fastened in the holes of the reel, runs out of the reel. This can easily be identified by a characteristic sound (click).

A reel with a button is snapped into the body of the grass trimmer bobbin.

The line has been changed successfully. In this case you need to put it back on the grass trimmer and you can start mowing the grass.

It should be repeated, the bobbin does not need to be removed from the weed trimmer, it was done for clarity of line replacement. You can disassemble the bobbin on the spot, reel it in and put it back.

The ends, so they do not hit the hood of the grass trimmer can and should be trimmed.

does not differ in principle from the method The only difference is two spools of line, instead of one.

there are two special locking sockets on the reel (see picture above).

Hook the hook formed earlier on the line to it, and start winding the line.

The winding is carried out in a special way

The tips are made into the holes in the body of the grass trimmer bobbin. They are pulled up to the click, which indicates that the line is out of the clamps.

The reel is fastened into the body. The line in the bobbin has been changed.

See also  How to put the spring on the trimmer handle

Changing a line in your trimmer: 2 simple ways

Feedback from our readers is very important to us. Leave your rating in the Комментарии и мнения владельцев with arguments for your choice. Your opinion will be helpful to other users.

The line must be strong, stiff and flexible. in a trimmer it serves as the working tool for cutting the grass. Manufactured by different thicknesses of lines. from 1.2 mm to 4.0 mm. Most models are designed for a maximum thread thickness of 3 mm. Which diameter of grass trimmer line is right in this or that case depends on a number of factors.

Depending on the hardness of the mowed vegetation:

The structure of the filament cord is important:

Important! Choose a line of the kind and parameters recommended by your brushcutter manufacturer. This material will work long and well with optimum loads on the product’s motor.

When you cut the grass, the ends of the lines wear out and their length decreases.The cutting radius is therefore smaller.Restoring the length of the line ends can be done by a gentle tap on the ground with the button in the center of the head, with the grass trimmer head gaining momentum.

After that, the two ends of the line will be fed, the excess of which will be cut off as the grass trimmer blade rotates.

In short, it becomes necessary to remove the head cover and pull the fishing line bobbin out of the housing.That’s where it gets interesting.A similar situation is described in the fable of Ivan Andreevich Krylov “monkey and spectacles”:)

The thing is that the Huter trimmer head has a unique design.I have never seen such an experience at any other company.To open it to reload the line is not for the faint of heart.

There is no description on how to do it.The inscription on the back of the head in English “press to open” did not help.Pressed, tried to turn the body in both directions.Nothing worked.

At last, having understood that my brains are not enough for the first non-destructive opening of the head, I put up with it and began to look for knowledgeable people.A cheerful and friendly saleswoman in my village store selling power tools and accessories helped. Antonina, who showed me how to do it. Thank her for that!

See also  Which Side the Stihl Trimmer Rotates

As time has passed, of course, I have forgotten this unique experience.It was already inconvenient to go back to Antonina to bow.I had to engage the brain, and substantially and in detail to deal with the problem.The Internet suggested a way to uproot the trimmer’s head cap.Which was completely unsatisfactory.

Found a video that lets me understand the head’s construction.It turned out that the cover is held on four holders, attached to the housing sockets and secured by a latch.Pressing it with an appropriate flat-blade screwdriver and turning the housing clockwise, you can easily remove the cover and pull out the bobbin with the rest of the fishing line.

Filling the line is standard and is described in detail in the description of the trimmer for grass.Also not easy, but you can figure it out.

When you use the head long enough, it gets a little soil, grass residue and other dirt.For good measure, I cleaned the dirt from the body and the outer parts of the head.

The head is easy to assemble.It is necessary to:. tuck the ends of the fishing line into the appropriate holes in the body:

In the photo, among other things on the bobbin are visible slots for attaching a fishing line size 1.6 to 2.6mm. For electric trimmers Huter Get-1200S recommended line diameter of 2 mm, which is firmly fixed in the slots for the line 2.4mm.

Next:- align the holders with the corresponding slots in the housing cover. by simply pushing on the opposite side of the housing with the inserted fishing line bobbin. click the latch of the cover latch. Turn the housing counterclockwise.

I got a great satisfaction after I finally managed to remove the lid head🙂 The feeling of victory over a rebellious and hostile to you and Nature:) Like taming horses Clodt on Anichkov Bridge in St. Petersburg.

To buy or not to buy such a head for trimmers?Only if there is a desire to fight with her when replacing the line.In addition, the weight of this head is 15g more than the weight of a similar head from Patriot trimmers.How important this is. I don’t know.

Plastic ordinary, I have not yet crumbled.But people are complaining about its fragility. Can shatter if struck carelessly on the ground.

Standard left-hand thread for the STIHL chain saw head is M10x1.25 LH.Accordingly, and the head for a line with a diameter of 2 mm can be applied to the standard with the same thread, for example, from the trimmer for grass Patriot.

There are plenty of different brands on the market at various prices.From the most democratic to the most exorbitant for automatic heads.You can choose the one that best suits your needs.