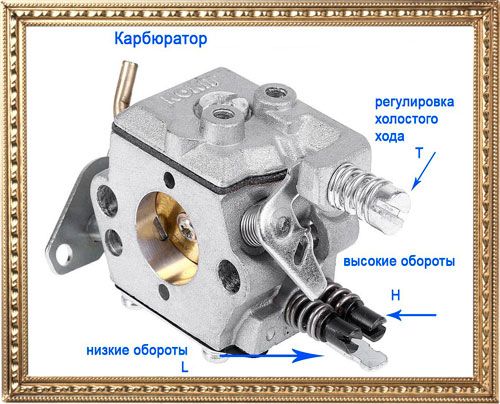 Why it may be necessary to adjust the carburetor even if it seems to start and work? Carb adjustments should be optimal.

In general, the carburetor has a very important effect on the operation of the chainsaw, it is its “brain” indicating how much air and fuel mixture to feed into the cylinder and in what proportion. If the mixture is “rich”, that is, the fuel in it will be more than it should be, then as a result we have a loss of power, deposits on the walls of the cylinder and piston. Which in turn can lead to failure of the chainsaw. In turn, the “poor” mixture, which has more than normal air in its composition, also leads to loss of power, insufficient lubrication of the CPG, scuffing and possible “jamming” of the engine. Optimal settings of the carburetor of the chainsaw allows you to get maximum power, extend the life of the engine, ensure minimal emissions into the atmosphere!

A little more about the “poor” and “rich” mixtures.

A “rich” mixture is a fuel mixture in which the amount of fuel supplied to the carburetor exceeds the norm. In this case, the fuel does not have time to burn out completely and less energy is produced than with the optimal ratio of fuel to air. Partially unprocessed fuel enters the muffler, then the chainsaw smokes heavily.

READ  How to Preserve a Chainsaw For the Winter

There is an excess of air in the “poor” mixture, which is also not good, as it has its drawbacks. Namely: insufficient energy during a flash (which means loss of power as a result), excessive heating of the cylinder due to insufficient lubrication and high revolutions, which leads to scoring, and not far from the engine “jamming” there.

Most chainsaws have three adjustment screws on the carburetor. In order about each:

READ  How to Install a Chainsaw Starter Spring

If you still have questions, write in the comments or better in the VK group.

Remember that the optimal carb adjustment is: