The assembly of any mechanism should begin after careful preparation. It is necessary to prepare not only parts, but also tools, a place, a lubricant.

Of the tools can not do without pliers, screwdrivers, a hammer, a brush for applying lubricant.

But what is the assembly scheme of the Makita 2450 and 2470 rotary hammer?

Do-it-yourself assembly of a Makita rotary hammer can only be carried out subject to the attached instructions.

The task of the assembly process is to replace the parts that have gone out of order with fit parts and to ensure interchangeability and operability of the tool.

How to assemble the hammer mechanism of a Makita punch?The impact mechanism is assembled from two nodes: the shaft shaft with a spur gear and the intermediate shaft with a rolling bearing. 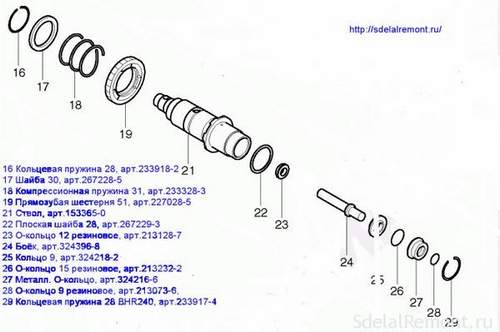 Now go to the opposite side of the barrel pos.21. On the other hand, the inner surface of the barrel must be greased and inserted into the assembled drummer pos.24.

Assembling the intermediate shaft and piston

Assembly of the intermediate shaft assembly

The gear unit is mounted on the inner housing, item 49.

By the way, there are cases when the axles pop out of the inner aluminum case. Both axles are pressed into the housing.

The mode switch is designed to translate the clutch pos.39 in various positions and transmit translational motion to the shaft of the shock mechanism through the rolling bearing pos.41 to the cylinder pos.32.

On the axis of the inner case, put on the lever of the mode switch pos. 82, pressurizing spring pos. 88 on top, and press down with a flat washer pos. 87. Install the snap ring pos. 86. And fix.
The snap ring must be carefully fixed. Turning the intermediate shaft, it is necessary to carefully check the correct operation and free movement of the cylinder in the housing. This must be done now so that it does not become clear at the end of the assembly that the assembly was not assembled correctly.

READ  How to Remove Tile from a Wall Without a Punch

Assembly of the shaft of the percussion mechanism

First, lubricate the inside of the cylinder, pos. 32, and insert the drummer, pos. 30, into it.

It remains to put the oiled barrel assembly in pos. 49 into the inner case pos. 21 in place, putting it on the oiled cylinder pos. 32.As lubricants, it is recommended to use a special grease developed for Makita rotary hammers.Lubricants are available in several types: Makita P-08361 and Makita 183477-5 SDS-PLUS.Makita 183477-5 SDS-PLUS grease is recommended for the gearbox. For drill shanks, Makita 196804-7 brand grease is used.

Lubricants vary in color, but have exactly the same characteristics.What lubricants are used in the Makita 2450 and 2470 rotary hammer?

And here is the assembled mechanical block.

Check its performance by rotating the countershaft and controlling the movement of the piston in the percussion mechanism. All!

Do not spoil the porridge with oil

So it is also allowed to apply grease. Do not spoil the porridge with butter!

READ  Stihl 362 How To Distinguish From A Fake

A lubricated mechanical unit must always be closed with a plastic case, item 14, in black.Having placed the housing on top of the assembly, press the housing down until the assembly is completely fixed in it.Backwardness, insert the four screws, pos. 10, into the housing and tighten.Now it’s the turn of joining the mechanical part of the rotor of the electric motor.

The helical gear of the rotor is firmly inserted into the body of the mechanical unit and pressed.

It remains to insert four self-tapping screws m4 × 60 pos. 57. And screw them into the body of the electrical unit.

Remove dirt from the grooves of the brush holder and put the brushes in place, fixing them with latches.

Now is the time to check the performance of the punch. Connect the punch plug to the outlet, turn on the punch for a while in the “drilling” mode. After making sure that the tool is working, turn it off. Set the mode switch to the “punch” position. Do not insert the tool.Check the performance of the rotary hammer in this position. At the same time, you checked the operation of the mode switch.

The cover is fastened with three self-tapping screws M × 4 of different lengths.

Connect the rotary hammer to the 220Β network and check in all modes.The Makita 2450 or 2470 rotary hammer is assembled and working properly!