Schematic diagrams, connection of devices and pinout of connectors 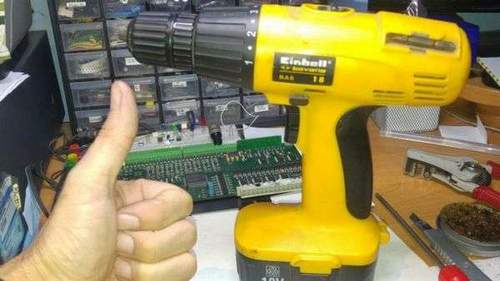 There was an 18-volt electric screwdriver. She had excellent grip, ease of use, excellent condition of the body. But the nickel battery almost did not hold current. It’s time to switch Ni-Cd power to Li-Ion.

First you need to pick up the batteries to the case. Four pieces of 18650 in parallel fit. The battery power is 1.5 A / h, so in general there is now 3 A / h and a maximum voltage of about 16.5 V. This is enough for a screwdriver.

A 4s cell is used here and with a nominal voltage of 3.7 V, reaches 14.8 V, and since the electric screwdriver motor is designed for 18 V, it will work in light mode. But the 4s package can work with 12-volt screwdrivers.

The 4s balancer is the main electronics that should be included in such a package. In our case, at a current of 30 A. Most importantly, all the elements are suitable in size and allow them to be closed in the case.

The indicator itself, along with the potentiometer, has only 6 radio elements. When it discharges, the green LED turns red. The hysteresis of the color transitions depends on the transistor used. Color changes begin only after a certain discharge of the battery, so there is still some time to tighten a few screws before the red light shows a full discharge.

The charger remains, but you need to redo it almost completely. With the exception of the diode bridge and charging contacts, you need to put a board of the balancer and the inverter of the charger. The charging voltage is set to 16.5 V. It is better to slightly recharge the battery than to constantly recharge it. This will extend the battery life for a while.

The charging current is set to 1.5 A, because the more the balancer becomes warm. At 2 A, it became noticeably warm, so the risk of overheating increased. The blue LED informs about the charge.