Chainsaws produced by well-known manufacturers of special tools are characterized by high reliability and a long service life. This is due to the reasonable design and the use of special grades of tool steel, from which all moving and rubbing parts. These include in the first place:

They all work in intensive mode and wear out over time. Even a slight change in the geometric dimensions of these parts affects the performance and smoothness of the saw. If you needed to remove the sprocket from the chainsaw to replace it, you need to understand the principle of the clutch system, with which it has a direct connection.

On chainsaws Husqvarna, Stihl, Partner and most models of other well-known brands installed centrifugal clutch. It turns on automatically when the engine enters a certain speed.

Clutch basket has the form of a disk. It has movable friction pads that can move in the radial direction. In the normal state, they are pressed by the built-in springs to the center, without touching the drum of the drive chain sprocket.

See also  In what position to store the chain saw 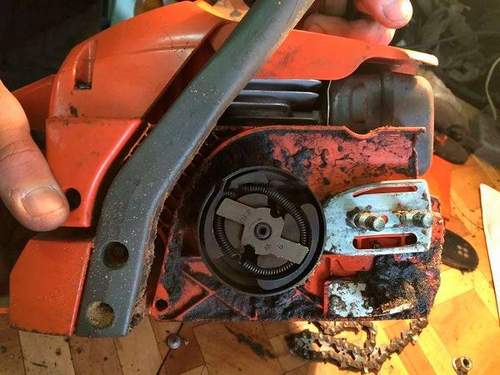 Depending on the model, the sprocket is located outside or inside the clutch assembly. For safety reasons, this entire assembly with part of the guide rail is covered with a protective cover.

Replacing the sprocket on a chainsaw with opening and revising the entire clutch assembly is carried out in the following cases:

The deviation of the geometric dimensions of the sprocket teeth from the nominal value must not exceed 0.5 mm. Otherwise, the work of the saw will be accompanied by increased vibration, which will lead to premature failure of the crankshaft bearings or the entire tool.

Usually sprocket work resource about twice the life of a single circuit. In practice, 2-3 chains are often used alternately until their cutting edges are abraded, after which they acquire a new set and change the asterisk.

In the process of repairing any working unit of a chainsaw, it is possible to change the rejected part only to a similar. Experienced craftsmen acquire the necessary parts in advance.

To open and repair a chainsaw you will need:

An example would be Husqvarna 137, a Japanese or Chinese chainsaw with an asterisk behind the clutch. First, the protective cover of the clutch assembly is removed. To do this, you have to unscrew the two nuts with a universal key. After that, the guide bar and chain are easily dismantled.

There are regular piston clamps that are mounted on the cylinder like a spark plug.

After fixing the crankshaft, the puller is inserted into the holes of the coupling and rotates clockwise until it is completely dismantled.

Behind the clutch, an asterisk and a needle bearing are detected, ensuring smooth rotation. If unacceptable wear is detected, they should be replaced with new ones. Clutch inspection and repair consists of inspecting and replacing springs and cams.

All parts are installed in the reverse order. At the same time, to install the clutch, you will also have to fix the piston, but this must be done with left rotation crankshaft a few millimeters to the top point.

The given sequence of actions is typical for most chainsaws, with slight deviations caused by the specific features of their design.

Work must be carried out carefully and accurately to avoid damage to the mechanism or its individual parts. Without at least basic knowledge of the design of the chainsaw, it’s not worth undertaking the replacement of the sprocket. It is better to entrust this task to professionals.