Replacing the Battery in a 12V Screwdriver 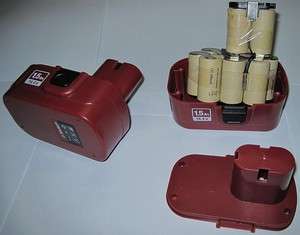 The most expensive and important part of a screwdriver is its battery. Therefore, when the electric drive fails, I do not want to buy a new tool. How to check the battery and carry out repair work in the event of a battery malfunction can be read below.

Regardless of the country of manufacture of the screwdriver, all batteries have the same structure. Inside the battery are placed rows of series-connected batteries. Batteries or “cans”. The total battery voltage is created by summing the voltage each battery. “Banks” have the same parameters. Size and voltage. The only difference between batteries is power.

The screwdriver battery itself has four contacts:

Screwdriver batteries are composed of the following types of storage elements, having their own advantages and disadvantages.

At its core the battery is a direct current source. Due to the conversion of a chemical reaction into electrical energy, it can transfer stored electricity to a circuit. When charging, the current flows in the opposite direction, thereby charging the drive.

The main parameter of any battery is the energy storage capacity. It indicates the current of what force the unit can give out within an hour and is measured in Ah.

Any battery operates on the principle of electrolysis. This means that its design includes two mandatory elements. The anode and cathode, which are in the electrolyte. As a result of a chemical reaction to the poles create an electric charge. Battery voltage is determined by the potential difference at the poles.

READ  How to Cut Ceiling Skirting With A Miter Box Video

Checking the battery of a screwdriver

To determine the real basic parameters of the battery, a check is carried out.

When carrying out actions aimed at checking the battery cells, one should not forget about the influence of such a factor as the “memory effect”. The phenomenon itself is that due to the frequent charging of the drive battery cells can change their capacity. This is due to the charges remaining from the previous charge. Than other batteries, nickel-cadmium “banks” are subject to this phenomenon.

Check the battery of the screwdriver when fully charged. A full check takes place in several stages.

Checking the electrical drive can be done using:

From the tools you should get:

The first stage of verification

Measurements of voltage and current are carried out in the process of charging an electric drive. Readings are taken periodically after a certain period of time. With increasing time, the voltage growth decreases.

Replacing the Battery in a 12V Screwdriver

According to the results of the first test, you can make an initial impression of the performance of the battery cells. This will help establish the need for disassembling the battery.

To answer the question how long the battery will be discharged, you should check the drive under load. The load must be selected based on the capacity of the drive. If it is unknown, then it is considered that load power is equal to half the product of current, which is given to the battery during operation, to the voltage of the drive. As a rule, this value is taken equal to 35–40 watts. Thus, you can use a car headlight (35 W) as a load or use a 12 V spot lamp with the same power.

To take battery measurements, the battery is connected to the load through an ammeter. The readings are taken with a voltmeter. “Banks” are connected for 2-3 minutes. The measured voltage must be greater than 12.4 V. If the readings fall in the range from 12 to 12.4 V, then this means that there is a damaged element in the battery. The presence of faulty batteries can also be indicated by a decrease in the brightness of the lamp used as a load. If the lamp goes out within the allotted time period, this means that the drive is very quickly discharged. It has a very small capacity.

So, let it turn out that through preliminary checks it was found the presence of faulty elements in the drive. Then it is necessary to disassemble the battery and remove the series-connected batteries. “banks”. As mentioned above, a battery consists of 10–12 such cells with a voltage of 1.2 V.

First, a visual inspection of the junction of the elements for violations is carried out. They can cause a decrease in battery performance in general.

After inspection, you should measure the voltage of each of the “cans”. The voltage of one cell should not be less than 1.2 V. During measurements, the battery cells should be disconnected from the connections with all kinds of sensors. The measuring device is connected to the poles of the battery. Undervoltage banks are subject to replacement. If, with a simple measurement, no faulty elements were detected, “banks” should be measured under load.

The ability to normal operation of each battery can be checked by comparing the “banks” by internal resistance. The value is determined by dividing the operating parameters of the voltage by the current strength and minus the load resistance.

Operating voltage is necessarily measured under load. As a load, you should take a resistor with a resistance of 10 ohms and with a power of 25 watts. Each battery is tested. The working current and voltage are measured.

For a better understanding, we give approximate calculations. Suppose, during measurement under load, data were obtained for one “bank”: operating voltage. 1.19 V and operating current. 112 mA. Before making the calculation, do not forget to transfer the value of the current strength from mA to A. 0.112 A. We perform the corresponding actions (1.19 / 0.112). 10 = 0.63 Ohms. Recall that the subtracted in our expression is the load resistance of the resistor (10 ohms).

Each type of battery has a certain amount of self-discharge.

So, during the month of storage:

Self-discharge control is carried out by measuring voltage every day for a month.

READ  What Angle to Cut the Baseboard

Checking the power supply for the presence of a “memory effect” is carried out by fully charging the battery and completely discharging it. They produce several charge-discharge cycles (3 or 4). The battery can be discharged using a 12 V lamp. In the course of actions, measurements of the residual operating voltage and open circuit voltage are performed. After repeated cycles, the “memory effect” will disappear.

So, during the checks, inoperative batteries were identified. What to do in this case? There are two ways out. An attempt to “resuscitate” the elements or a simple replacement of broken “cans”.

It’s worth mentioning right away, trying to “reanimate” ion batteries is useless. This type of battery cannot have a memory effect, and therefore the reason for their failure lies in the decomposition of lithium. But first, it’s worth finding out. Perhaps the control scheme is wrong. Two methods can be used here.

To “reanimate” the battery of a screwdriver’s battery, two methods are used:

However, these methods cannot completely solve the problem of battery failure. They only delay the inevitable. Sooner or later, you will have to change banks anyway.

Replacing “cans” in a screwdriver battery

The task itself is simple. It is good if there is experience in soldering. A defective battery is cut off at the junction of elements, a serviceable battery is put in its place, and then soldering is performed. Apparently, nothing complicated.

However, several important nuances should be taken into account:

After soldering, you should conduct a charge-discharge cycle, and then measure the voltage on the “banks”. It should be around 1.3 V.

As you can see, it’s not so difficult to check and repair the screwdriver from the article. Better to spend some time and effort than spend money to purchase an expensive tool.