Hammers are called percussion drilling devices designed for drilling and chiselling holes in particularly durable materials.Two ideas are implemented in the puncher: the working tool rotates and simultaneously moves in the longitudinal direction, creating a shock pulse.

Hammers always work in extreme conditions.The duration of the drill depends not only on the correct operating conditions, but also on the reliability of the parts included in the product.But no matter how hard you try, over time, punchers begin to fail.

To properly repair the hammer, you need to familiarize yourself with its device.

Repairing a Makita 2470 and 2450 punch with your own hands can be done by a person who has the skills of a locksmith and knows the basics of electrical engineering.
Remember! Observe safety precautions and unplug the machine when disassembling. 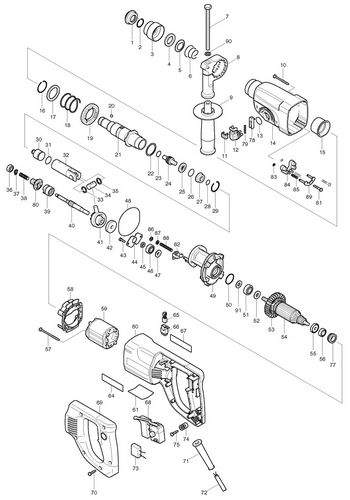 The Makita 2450 and 2470 rotary hammer circuit consists of a mechanical and electrical part.

The electrical circuit of the Makita rotary hammer provides the conversion of electrical energy into kinetic energy through the rotation of the rotor. The electric part includes an electric motor, a power button with a speed controller, a reverse switch, connecting wires.

In this article, we consider all the malfunctions of the electrical part of the Makita 2470 and 2450 rotary hammers and how to solve them:

Electrical failures of the Makita 2450 and Makita 2470 rotary hammersElectrical malfunctions are manifested in the fact that when the punch is connected to the mains voltage, the tool does not turn on.The Makita rotary hammer wiring diagram is simple.

The electrical circuit of the Makita 2450 rotary hammer is a series connection of the electric motor, start button and wires.

The layout of the makita 2470 rotary hammer is similar.

The procedure for determining electrical faults

Determination of the integrity of the electrical part of the Makita rock drill. In order to repair a Makita 2450 or Makita 2470 punch with your own hands, you need to arm yourself with devices and tools. Any tester, a set of screwdrivers, wrenches, a hammer, a wooden extension will do. It is good to have a screwdriver with a built-in phase indicator.

You need to take the tester, connect to the ends of the punch plug and press the punch switch. If the tester shows some resistance, then the power supply circuit of the punch is intact.

If the tester shows infinity, then the integrity of the circuit is broken and it is necessary to remove the back cover to control the connection cable and electric brushes of the punch.

The back cover (usually black) of the punch is easy to remove, you just need to unscrew the three screws with a screwdriver or screwdriver.

Remove the cover and use a screwdriver to disconnect the ends of the wires from the electric brushes.Using a tester or a home-made device, popularly referred to as the “arch”, determine the integrity of the lead wires and the correct operation of the switch.

A few words about a simple control device called “arcade”.

We repair together. Makita HR 2450. The Beginning.

The device consists of an LED or a light from a flashlight, a finger-type battery and two pieces of wire. The entire electrical circuit of the control device is a series-connected parts. Connect the battery with one end of the LED or light bulb, connect the wires to the free ends of the LED and the battery. You will get a universal device for checking the integrity of electrical circuits.

Replacing the brushes is done when they are completely abraded or poorly contacted. This malfunction is detected by strong heating of the points of installation of the electric brushes.

Failure to turn on the punch can be caused by abrasion of contacts on the reverse switch.It eliminates such a malfunction very simply.

To repair the reverse switch, the back cover must be disconnected. Carefully disconnect the wires from the button. Carefully inspect the switch.

Another common electrical fault is poor contact between the stator and the lower contacts of the reverse switch.

To remove the stator, it is necessary to disconnect the gear housing (black) from the stator housing (green).

Remember! In the mechanical part of the rotor, the bearing is pressed by a special ring. When disassembling, do not lose it.

The stator is located in the green case. Looking in the middle, you will see two self-tapping screws 4 × 60, art. 266334-3, pos. 57, securing the stator to the housing. Unscrew them, remove the plastic stator protector for HR2450, art. 419201-3, pos. 58., Release the stator.When you get the stator, you will see the contacts on the stator and the reverse switch panel.

The assembly of the electric part of the hammer is in the reverse order.

It often happens that the machine stops rotating the drum. One reason for this may be brush wear. This article will talk about how to change the brushes for electric motors of washing machines with their own hands. If the automation works normally and at the same time fills water properly, but the drum does not work properly or spins very weakly and makes extraneous sounds, then in this case, you can be 100% sure that the problem is wearing carbon brushes. Also, an error code may appear on the display, which indicates an incorrect operation of the engine, as well as the need for an electric brush.

To replace, you only need a Phillips screwdriver and a set of new brushes. Particular attention should be paid to the fact that it is best to use the original kit for installation, since such brushes will work well without damage to the motor and other parts. In addition, they do not have to grind or file to fit the size of a particular engine. Carbon or graphite brushes themselves can simply wear out or delaminate.

If the carbon brushes are stratified, then this indicates that they were of poor quality. Therefore, before acquiring a particular model of brushes, you need to make sure of their decent quality. Otherwise, you will soon have to purchase new ones, since their service life will be short.

How is replacement done?

A simple algorithm will be presented below, which must be followed when replacing graphite or carbon brushes in the washing machine engine.

Before you purchase a particular set of spare parts, you must pay attention to the manufacturer and the quality of the material from which they are made. You also need to carefully approach the installation, since the life time directly depends on this.