Makita power tools have long established themselves as professional, reliable and easy to maintain. In addition, it has good maintainability and a relatively low price.

Of all the lines of perforators, I want to stay on the model Makita HR 2450. The tool is very convenient in operation, has three operating modes and withstands very long loads. For the author of these lines, the puncher worked faithfully for more than six years without damage. Over, it was used in intensive loads. But at one point.

Missing punch. What to do?

As you know, nothing eternal happens. And reliable technology breaks down. Once, in the midst of work, he stopped pecking. In the rotation mode, the machine worked, and the blow suddenly disappeared.

The gearbox was disassembled and the cause of the breakdown was identified. A sleeve was broken in the barrel body, in which the striker (striker) directly performs shock work. As a result, the drummer stuck in the fragments of a collapsed sleeve.

The service center advised to replace the barrel completely. It turned out that the sleeve is pressed into the barrel at the factory and is not supplied separately. I had to buy a whole new barrel.

In this article, we will tell you how to bring the hammer to working condition after this, in general, simple breakdown. If you have the skills to repair a power tool and the desire not to pay someone your hard earned money, then we take the tool and begin disassembling the car.

It will take two ordinary flat head screwdrivers and one Phillips screwdriver. One of the flat screwdrivers should be thin and narrow, not more than 4 mm wide. You will also need a wire hook to remove the snap ring. It can be made from a bicycle spoke, the main thing is that the wire is rigid and does not easily bend. A rubber mallet or wooden mallet will also be needed.

Disassembly of the punch should begin with the removal of the protective rubber cap. Anther. It is easily removed, just take it with your fingers and pull it off the barrel. 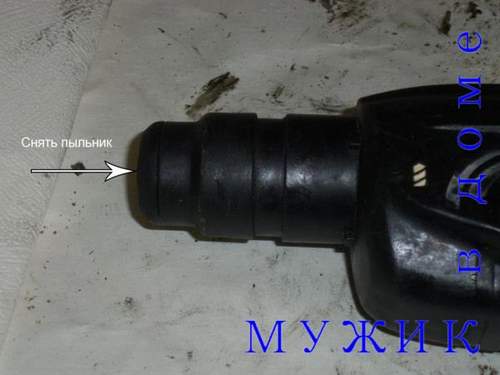 Then, having pressed on a plastic cover and having squeezed a spring of a lock of the SDS mechanism, we remove a lock ring with a screwdriver.

Using a screwdriver, remove the stopper

The lid is removed from the barrel, and after it, again compressing the spring, we pull out the retainer ball along with the spring and figured washer.

Then the mode switch is disassembled. Under the cover holding the red button-lock, there is a special groove for the screwdriver. After inserting a screwdriver into this groove and prying off the lid slightly first from one edge and then from the second, carefully remove it. No significant effort should be made here, the lid is still plastic and may break. The red button along with the spring is removed from the switch housing, and it moves to the left until it stops, a little further than the drilling mode. It is from this position that he is removed from the gearbox. For this operation, the switch should be slightly picked up with thin screwdrivers on both sides and removed together with the rubber O-ring.

Now the gearbox is removed. Using a Phillips screwdriver, unscrew the four bolts connecting the box to the stator housing. Then, holding it with your hand, you need to lightly tap with a mallet on the end of the barrel so that the box comes off the gearbox.

Having removed the box, we take out the barrel from the gearbox. It is removed easily.

We take the barrel out of the gearbox

It is necessary to remove old grease with a rag, and rinse the barrel with gasoline or kerosene and wipe it dry.

So, as mentioned above, it was necessary to completely change the entire trunk. However, this item purchased at a service center was “a goal like a falcon”. That is, there was absolutely nothing on it and I had to rearrange all the details from the old barrel to a new “blank”.

The most difficult operation was extracting the drummer from the barrel. There are special holes in the barrel body through which the snap ring is visible. This ring holds the striker in the saddle with rings and rubber dampers. Insert a thin screwdriver into the hole, slightly bend the ring. We do this first on the one hand, and then on the other. The stop must come out of the groove.

Then, from the inside, we pull out the stopper from the wire with a homemade hook into the light of God.

Using a wire hook, pull out the stopper from the inside.

Next, we remove the striker with washers and rubber rings. It is necessary for assembly to remember or sketch the location of all rings and washers. If something goes wrong, photos and drawings from the article will help.

Now you need to remove the gear from the shaft. Having pressed on a washer and having squeezed a spring, with a thin screwdriver it is necessary to remove a lock ring from a flute. After removing it, remove the washer, spring and gear from the barrel.

The gear wheel is put on a new barrel and engages with splines. Following it, a spring with a washer and a stopper are installed. Insert the circlip and lock the mechanism in the working position.

To do this, take the barrel in both hands and, resting it in the palm of your hand, use your fingers to compress the spring with force, while shifting the washer and stopper down. It is necessary to compress until the stopper engages in the groove.

Then, a striker with washers and rubber rings is installed inside the barrel in the order in which he understood. But first you need to pay attention to the condition of the drummer, his appearance.

If the striker has potholes and sinks after long work or because it has been scratched on a broken sleeve, then it should be sanded a little. To do this, it is clamped into the drill chuck and processed with a fine-grained emery cloth. But if the bumps are too big, then the drummer will be easier to replace.

It is necessary to lubricate the striker with special grease before installation and to continue to use lubricant during operation. When inserting a drill into the hammer, it is necessary to apply a little grease to its shank. This extends the life of the machine.

Having installed the striker mechanism in the barrel, we fix it with the circlip. We try using a screwdriver to move the drummer from both sides inside the barrel. He should walk easily in the canal and not jam.

The assembled barrel is installed in the gear housing. Putting it on the cylinder with a piston, we engage it with the pinion gear and insert it into the housing. All parts should be well lubricated during assembly.

Install the barrel in the gearbox

Then we install the gearbox, after lubricating the needle bearing. With four bolts we draw the box to the stator housing and set the operating mode switch in place. To do this, set it to a position slightly to the left of the drilling mode.We insert the red latch button with the spring and move the switch to the drilling mode. We click on the plastic cover and check the operation of the switch.

Set the mode switch in place

We snap the cover of the punch mode switch

Having pressed a spring with a washer, we establish a ball a clamp

We try a hammer drill under load. When the machine is operating, there should be no extraneous noise in the gearbox; the operating mode switch should easily move without jamming. In general, everything should work, as before the breakdown.

The author of this article hopes that it will help dear readers understand the repair of a hammer drill. Any breakdown can be simple if you find its cause. And then it all depends on your skill and diligence.