The small width of the cut makes relatively low energy costs for cutting the material. And finally, with a band saw, you can cut the workpiece of almost any thickness, while the geometry of the circular saw imposes restrictions on the thickness of the material cut by it. However, to take advantage of all these advantages, band saws need to be able to properly prepare for work. The main preparatory operations include sharpening and wiring band saws.

Saws for wood are made of tool alloy steel having a hardness of 40-45 HRC. Domestic manufacturers use 9HF, B2F steel (for band saws for metal), etc., foreign. Their own steels (C75, Uddeholm UHB 15, etc.). When hardening the teeth of such saws with high-frequency currents, they can acquire hardness of up to 64 HRC and higher.

Saws for cutting carbon steel and non-ferrous metals of small thickness are also made of tool steel with obligatory filling of teeth with high-frequency currents. However, more often bimetallic saws are used for metal cutting, in which the blade is made of spring steel, and the strip on which the teeth are cut is made of high-speed steel with a high content of tungsten and cobalt. After hardening, it acquires a hardness of up to 65-69 HRC. High speed steel is welded to the base of the saw with an electron beam.

Bimetallic saws are capable of cutting thick metal from tool, stainless, heat-resistant and other steels, titanium alloys and other metals.

Teeths with greater wear resistance are obtained by fusing them with stellite (an alloy based on chromium and cobalt with tungsten and / or molybdenum additives) or soldering hard alloy plates to them. Such saws are superior in their cutting abilities to bimetallic ones. They are used for cutting fiberglass, tires, cables, reinforced plastics, heat-resistant alloys, graphite, aerated concrete, bricks and other materials that are difficult to process by cutting.

The geometry of the teeth of band saws

Three main types of teeth are used for sawing wood: for carpentry, for dividing saws, for sawing beams and logs.

The specific values ​​of the sharpening angles of band saws are determined by manufacturers, based on many factors. In general, one can single out such a dependence. The harder the wood, the smaller the rake angle (γ).

READ  What Oil is Pouring Saw

For saws for metal, a different tooth shape is also used, depending on which metal they are intended for cutting. Saws with a constant pitch distinguish two main forms.

Standard, designed for cutting thin-walled metal with short chips with a rake angle (γ) of 0 °.

A tooth with a positive rake angle (γ) used in saws for cutting thick-walled metal with long chips.

To eliminate the effect of resonance leading to blade vibrations, some saws are made with a variable pitch, at which the distance between the teeth varies within a separate group. The step size is indicated by the largest and smallest values.

There are several types of wiring, the names of which may differ from different manufacturers. The main types are.

Standard, in which the teeth alternately bend in opposite directions.

Scouring, which, after bending two teeth, the third does not get bred, remaining in place.

It is mainly used for saws designed for cutting especially hard alloys and materials. Every third tooth has a trapezoidal shape, it remains in the center of the saw and serves to guide the entire saw band.

Wavy, the most difficult, in which the teeth are bent with a variable value of the limb, forming a kind of wave. 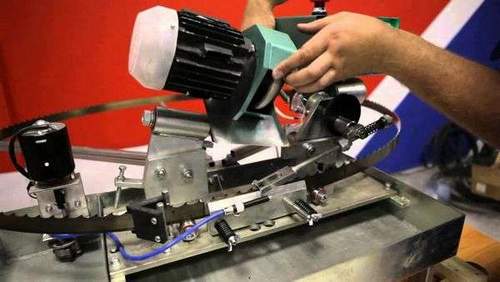 During a divorce, not the entire tooth is bent, but only a part of it at a distance of 1 / 3-2 / 3 from the top. Manufacturers of saws have their own recommendations on the parameters of the divorce of their saws, however, in the general case, the values ​​recommended by them fall within the range of 0.3-0.7 mm.

The general rule is that there should be more divorce for band saws for cutting softwood than for saws for hardwood. But there should never be such a curvature of the teeth so that there is an uncut wedge in the center.

When divorcing, its uniformity for all teeth should be ensured. Deviation should not exceed 0.1 mm. With uneven wiring, the saw may go towards a stronger divorce.

A simple lever adjustable device (model RU-05) is shown in the figure below.

The saw is installed in the groove of the device with a tooth opposite the dipstick gauge, which serves to measure the magnitude of the divorce. Using the mobile scale, the indicator arrow is set to zero.

When pressing the adjustable lever, the bolt (1) presses on the tooth, bending it and thereby wiring it. The indicator arrow shows the wiring size. By screwing in or out the bolt, its required value is set, after which the bolt is locked with a lock nut (2).

The divorce is carried out through one tooth, after which the blade unfolds, and the operation is repeated in relation to the remaining teeth.

There are simpler divorce devices designed to divorce hacksaw blades. Although they cannot provide high accuracy and require some physical effort, as a last resort, you can use them.

Depending on the hardness of the teeth, different circles are used to sharpen the band saws. Electrocorundum, diamond or elboric (they are also borazon). Bakelite-based corundum wheels are used to sharpen tool steel saws. Sharpening bimetallic saw blades or other saws with high hardness teeth requires an elbor or diamond wheel.

The shape of the circle used is determined by the parameters of the saw and the grinding method. Those. What kind of tooth profile the saw has and which edge is sharpened. The circle can be profile (have the form identical to the profile of the tooth), flat, cup, and dish-shaped. To select the grain size of the abrasive, in accordance with the stage of sharpening, you can use the table in the article about bars for sharpening. The peripheral speed should not exceed 20-25 m / s.

To increase the durability of sharpening, it is important to fine-tune it (processing the front and rear faces with a fine-grained donkey), carried out after sharpening.

In general, band saws are unpretentious regarding sharpening. They can be sharpened in circles of different composition and shape, along the tooth profile or the front and / or back surfaces, special machines and manually.

There are two main ways to sharpen band saws. Full-profile sharpening with a borazon profile wheel and sharpening of the tooth faces separately.

Full-profile sharpening of the band saw is the highest quality. With it, an elbor circle, having a shape exactly matching the shape of the tooth profile, grinds the entire interdental cavity with the back and front surfaces of adjacent teeth in one movement. At the same time, all the parameters of the tooth profile are exactly preserved and the angular shapes at the base of the tooth, which weaken the saw, are eliminated.

The disadvantage of full-profile sharpening is the need to have your own grinding wheel for each saw of a certain profile.

There are a large number of machines for sharpening the saw along the front, rear or front and rear surfaces of the tooth. As grinding wheels, flat wheels with a suitable abrasive are used. Electrocorundum, elbor or diamond spraying.

Special grinding machines with automatic sharpening mode, it is advisable to use with a large amount of grinding work. When occasionally sharpening a band saw at home, it is more reasonable to sharpen the saw manually on a conventional grinding machine or using an engraver. You can sharpen both the front and rear faces.

This is how sharpening a band saw along the front surface of a tooth on a grinding machine with a corundum circle with a beveled corner.

Sharpening the band saw on the rear surface:

We must not forget to periodically edit the grinding wheel.

And here is sharpening on the back surface of the tooth with an engraver with a small flat circle.

Despite the high rotation speed (10000 rpm, with a minimum rotation speed), due to the small diameter of the circle (20-30 mm), a normal peripheral speed is provided. 11-16 m / s. When working, be sure to wear safety glasses or a mask, as due to the thinning of the circle, the probability of its partial or complete destruction is high.

Well, if there is no machine and engraver, you can sharpen the saw and “grandfather” way. Using a file. Sharpening is carried out in several movements (3-4) along the back and / or front face of the tooth. In fact, this operation is quite simple and the skill of high-quality sharpening with a certain effort is acquired quite quickly.