Stihl Original How To Distinguish A Fake

Chainsaw Stihl. A device trusted by a huge number of men for thirty years. Consistent quality and excellent work behavior. All this has been kept from the first batches of chainsaws to this day. Manufacturers did not even change the design of the device. The only drawback of the Stihl chainsaw is the huge number of fakes that are collected somewhere in the basements manually or on primitive machines. The quality of such products is inferior to the original samples, but, in principle, you can work with them.

But the thing is different. Some sellers are trying to sell a fake under the guise of the original. The difference in price and quality is enormous.

If earlier fake chainsaws had a primitive look, even from a distance not like the original, now copies are as close as possible to genuine instruments.

For this article, a comparison was made of the original and fake chainsaw Stihl MS 170/180. To be sure that you are purchasing an original chainsaw, pay attention to the following details of the device. 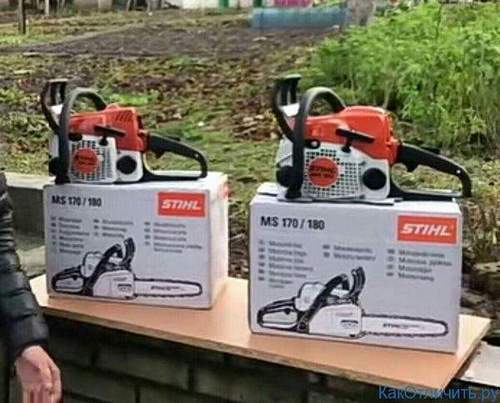 Boxes of devices in appearance completely match. But the difference is in size. The original box for a couple of centimeters longer fake.

In addition, on the original box there is always a sticker indicating:

READ  Trimmer Stihl Or Husqvarna Which Is Better

The number has nine positions and is assigned separately to each saw.

This number is required. Without it, repair in the service center is not possible.

To date, one of the main signs of a fake chainsaw Stihl MS 170/180 is the presence of a special measuring capacity for fuel. Original chainsaws are extremely rarely equipped with such a device.

In addition, in chainsaw chainsaws there are:

On the original there is a company inscription “Stihl”;

On the links of the original chain you can read the inscription “Stihl”, there are no words on the fake chain;

Boxes with a cutting chain look the same

The original tire most often goes to cardboard case. Fake. In a plastic bag. They are also slightly different in color. The main difference between the tires is the lack of additional window oil supply for the driven sprocket on the original tire.

There is no additional window on the original bus (top)

In addition, Chinese tires most often have a length of 40-45 cm, while the original Stihl MS 170/180 chainsaws are equipped with tires with a length of 30-35 cm.

Instruction manual the operation of a fake chainsaw almost completely repeats the original sample. Except that the place for the company logo is empty.

READ  How to Distinguish an Original Stihl Chain from a Fake

Only two tools are attached to the original chainsaw: a multi-purpose screwdriver and a key with the inscription “Stihl” without packaging. Everything.

The fake boasts a wide variety:

Appearance of the device

The original Stihl chainsaw used in comparison took its current form in 2015. Until that moment, she looked exactly like a fake.

As often happens, manufacturers of copies do not differ in speed of reaction in matters relating to changes in the design of the products they copy. Their copies have an old design for several years. The same thing happened with the copy involved in the comparison. She still lives in 2015.

Pay attention to the screws. In the original chainsaw they are made under “asterisk“

In fakes, most often the screws go under a flat screwdriver or hexagon.

However, our copy is very close to the original, so its screws are also made under the “star”.

The copies of the covers are made very accurately, except that they do not have the inscription “Stihl”.

There are two large nuts on the left side of the chainsaw. The original nuts have the letter “S”. On fake everything is clean.

READ  How to disassemble a STIHL 180 chainsaw

On the original device, a sticker with a 9-digit serial number is glued in this place. It should match what is on the box.

There is no such sticker on a fake chainsaw.

The original muffler cover is engraved with “Stihl” and the model number. Copy silencer is absolutely smooth.

The air filter of the original modern chainsaw design is very dense. From above he white, and brown on the other hand. The filter holder is engraved vendor code products.

In a fake filter is very primitive. It’s a piece foam rubber. The holder has a dark color, the article is not specified.

In addition, sometimes it’s enough just to take a good look at the details of the device. For example, how high quality and without burrs / sagging the plastic cover of the product is made. Of course, in the original sample, it should be made soundly.

On the inside of the original cover there is even factory number details and company logo.

Of course, for an experienced craftsman who was holding in his hands more than one real Stihl saw, such advice is useless. But for those who are just starting to conquer the heights in this matter, this article will be useful.