The engine shoots at the muffler (pops) What could be the reason for the pops in the muffler? Let’s analyze both the injection engine and the old carburetor. Everything on the shelves

Ignition problems sometimes also lead to the fact that the engine shoots at the muffler. With the appearance of such a malfunction, you immediately need to check whether the ignition timing is correctly set. If it is delayed, it will not work to avoid the shots. In this case, the spark that ignites the fuel will be supplied with a delay. When the intake valve is opened. In this case, a small amount of fuel will be discharged into the manifold. It is worth noting that not only the exhaust pipe, but also the valve can burn out. But this will only happen if you ignore the claps for a long time. 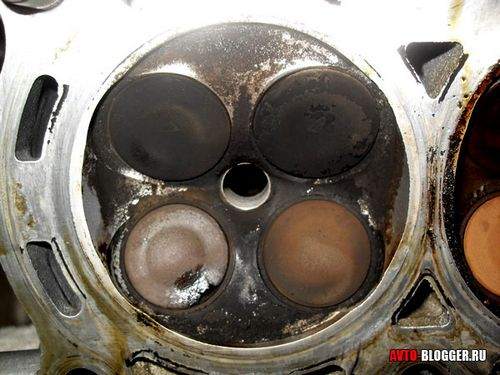 If the ignition is set normally, but shots still occur, the problem lies in a weak spark. In addition, this is caused by faults in the contacts of the wires, the contact group and the toggle switch. A weak spark also occurs due to problems with the candles, so you need to make sure that they are in working order. A common problem is the inconsistency of its heat rating to a given engine.

Usually, when popping occurs, car owners start testing the engine under various load levels. If problems occur at high and low speeds, this most likely indicates a failure in the size of the valve thermal clearance on the cylinder block. At the same time, pops will also often occur as a result of overheating of the power unit.

Camshaft pushers should always have a small gap where they contact the valve. When the engine warms up, the metal of the parts expands slightly, while the thermal gap will decrease. Properly positioned valves should fit snugly up to the seat.

In the absence of this gap, the valve will not be able to tightly close the lumen, the fuel mixture during the compression stroke will go into the exhaust manifold, in which it will ignite, resulting in sharp pops.

If the cause of the problem lies in the thermal gap, the usual adjustment of the valve position will help.

The engine fires at the muffler (pops). Why? Let’s disassemble the injector and carburetor

Shots arising in the exhaust system are a sure sign of a machine’s power unit malfunction. Most often, a similar problem occurs in the case of carburetor engines and it is associated with ignition faults or the gas distribution mechanism. But sometimes it shoots at the muffler and the injection-type power plant.

In this thread, we will analyze the malfunctions of tillers and cultivators of all brands, Salute. Neva, Bison, etc., and their removal and repair. Most of the malfunctions are characteristic of all types of tillers, their engines and other components.

– If the engine is tilted, must be placed horizontally.

– The fuel may not be supplied to the carburetor. It is necessary to disassemble and purge the fuel system with air.

– The filter may be clogged. The filter needs to be replaced or cleaned.

– The outlet in the gas cap may be clogged. Needs to be cleaned.

– Maybe it’s the candle. It is necessary to check the connection of the wires, the engine stop buttons, unscrew the spark plug and clean. Replace if necessary.

– Engine may not yet warm up. Need to warm up

– Candle contamination possible. It is necessary to clean the candle by removing carbon deposits.

Why does the tiller stall under load?

A fairly common problem is that the equipment stalls after 5 minutes of work. Often the reason is a fuel supply failure and ignition problems.

If the equipment stalls during operation, you need to check how well the fuel is supplied:

The tiller starts up and stalls if there is a problem with the ignition. First you need to check the candles. Wet items indicate breakage. It is necessary to re-adjust the ignition system of the equipment.

Reconfiguration is done as follows:

If the above steps are performed correctly, the tiller will not stall under load. When tilted, vehicles may stall if there is not enough fuel in the gas tank. The unit must be installed straight, remove the starter rope. If the engine starts, you need to fill the fuel tank.

Why does the tiller work intermittently?

There are other issues worth considering:

Owners of both petrol and diesel vehicles may face such problems. Regardless of the specifics of the breakdown, it is necessary to urgently stop using the unit and fix the problem.

Why does the tiller start and stall?

If the equipment starts up and immediately stalls, this may indicate the following problems:

Why does the tiller shoot the muffler?

Often, when working with an agricultural unit, loud uncharacteristic sounds from the muffler are clearly audible. At the same time, the tiller also smokes heavily and stalls. To be able to fix a malfunction with your own hands, you need, first, to determine its essence.

Most often, a tiller shoots a silencer due to a number of the following problems:

Repair of all of the above breakdowns does not require special skills and great experience. The most important thing is to act strictly in accordance with the operating instructions for the agricultural unit.

Repair: why the tiller stalls under load, shoots at the muffler, works intermittently, and more

Tiller is one of the most useful household units. Even a simple and not particularly powerful machine can significantly facilitate the care of the garden and the surrounding area. At the same time, a tiller is a technique that tends to break. Let’s look at the most common breakdowns of an agricultural unit, their causes and methods of elimination on our own.

Repair of tillers in case they start up and, after a few seconds, stall, it is necessary to start with finding the main causes of this malfunction. To do this, you need to inspect:

Another less common cause of a breakdown in which the tiller does not develop revs is a gearbox malfunction, which is evidenced by a third-party sound from the gearbox side. To fix the damage, you need to change the oil that you use to lubricate the unit.

Late ignition is the reason for shots in the muffler

Late ignition of the fuel mixture in the combustion chamber can also be the reason why muffler shots. The culprit is the illiterate ignition setting. At the moment of overcoming the top dead center (TDC) on the compression stroke, a spark should appear between the contacts of the spark plug, which ignites the fuel mixture.

If the ignition is slightly delayed, then ignition occurs when the piston moves down at full stroke, performing a working stroke. The outlet valve starts to open. The fuel mixture at the moment of ignition escapes into the exhaust manifold and causes a pop.

Shoots at the muffler. Check the carburetor!

Often to figure it out right away why shoots the muffler, does not work. Contrary to the popular belief that the fault is the violation of the valve timing, there may be other reasons for this behavior of the motor. Before proceeding with the search and elimination of engine malfunctions that led to the shooting in the machine’s muffler, one should understand the nature of this phenomenon. A loud shot indicates that a combustible mixture is ignited in the exhaust system.

First of all, you should check the condition and settings of the carburetor, as well as the air filter. As practice shows, quite often the re-enriched fuel mixture, experiencing a lack of air, does not burn out in full on the compression stroke and is partially transferred to the exhaust manifold and further to the muffler. Gasoline accumulates in an enclosed space at high temperatures and ignites.

The troubleshooting algorithm is simple:

Adjusting the thermal gap with pops in the muffler

As soon as the engine malfunctions begin, experienced and novice drivers try to try it out at different loads. If you hear pops in the muffler at idle, medium and high speeds, there is a high probability of poor adjustment of the thermal clearance of the cylinder head valves. The fact that it is necessary to take out inventory to adjust the valves may be indicated by the appearance of pops after the engine warms up.

When properly adjusted, the valve disc always fits very tightly to the seat. If there is no thermal gap, then the valve is not able to completely close the lumen. At the moment of the compression stroke, through a small gap, the fuel mixture partially flows into the exhaust manifold, where it ignites. Unpleasant pops are “treated” by elementary adjustment of the cylinder head valve thermal clearance.