Trimmer Carburetor Does Not Pump Gas

The stable and effective operation of the household trimmer is largely dependent on the quality of the fuel used by its operator. The filled fuel mixture must be enriched with air. For this, the built-in carburetor is responsible for this in the basic lawn mowing device. This node is one of the main elements of the braid, so the operator must constantly monitor its serviceability and settings. Otherwise, the trimmer will lose its performance and may completely fail.

The standard design of any gas trimmer must include a fuel system, the basis of which is the action of a standard carburetor. Its structure and initial principle of operation are almost the same for all lawn mowers, regardless of their design features and purpose.

The lawn mowers carburetor consists of an all-metal aluminum housing that protects the internal components of the assembly from moisture, small debris and dust. A built-in diffuser is provided in the lower part of the body, the second name of which is “Venturi nozzle”. The main function of this standard part is to supply air in the amount required by the fuel assembly to enrich the fuel. The diffuser operates according to a simple principle: the smaller its diameter becomes, the more intensively the air is absorbed. This is due to the fact that in the zone of the smallest diameter the level of air discharge becomes maximum. 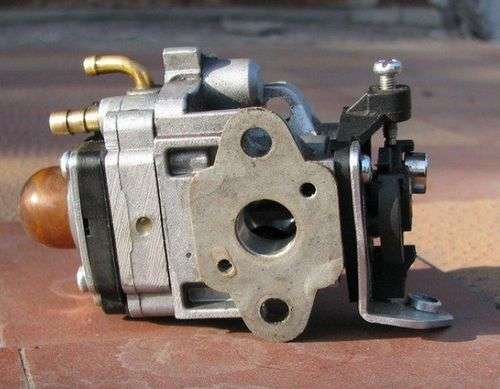 The upper part of the built-in factory diffuser is pre-equipped with fuel pipes, through which, under the influence of air, the fuel mixture is drawn in. Other carburetor parts: regular adjusting screws and a fuel pump, can be located both inside and outside the carburetor.

The carburetor of the lawn mowers includes a throttle, the main task of which is to regulate the amount of intake air. The greater the amount of air, the higher the rated power of the trimmer power unit. Another function of the damper is to facilitate the cold start of the engine. If the lawn mowing is started for the first time after a long period of inactivity, the shutter must be closed. Immediately after starting the motor, the part must be opened, otherwise the engine will die out.

The carburetor for the trimmer is equipped with a pulse channel that connects the internal cavity of the ICE crankcase with the pulse chamber of the pump. The piston located in the cylinder of the motor creates a reciprocating motion, which leads to gradual changes in pressure inside the crankcase. At the same time, the membrane is driven. Thus, the action of the pump is fully synchronized with the operation of the power unit.

The membrane of a regular carburetor takes an active part in fuel suction. It enters the fuel assembly through the fitting. After that, the fuel passes through the built-in intake and exhaust valves, then through the strainer and the fuel pipe. Then the fuel flows next to the needle and gradually fills the chamber equipped with a control membrane.

The regular valve of the trimmer carburetor is connected to the membrane using a lever. Below the built-in membrane is a cavity into which air is drawn in through a special opening.

The carburetor for lawn mowers works on this principle in stages. This ensures uninterrupted operation of the fuel unit and uninterrupted supply of fuel to the cylinder of a standard power unit.

When is the carburetor adjustment of a household trimmer required?

Periodic adjustment of the trimmer carburetor should be performed on a serviced and fully functional power unit. Before starting the procedure, the operator must thoroughly rinse the engine parts and inspect its CPG for any burrs or other defects. In addition, you will need to clean or replace the spark plug, as well as rinse the filter elements in the construction of the lawn mowers.

During carburetor adjustment, the lawn mowing engine must run under a certain load. It is best to install a cord of the appropriate diameter or cutting knives on the trimmer.

After mounting the cutting organs, the operator should start the internal combustion engine trimmer and leave it to work for about 10 minutes. If during operation of the power unit at idle it was noticed that the cord or knife rotate, then you need to reduce the speed created by the motor. To do this, turn the lower control, often denoted by the letter “T”, to the left, until the installed cutting unit stops completely.

A further configuration of the fuel assembly is as follows:

The sequential implementation of these actions will allow you to correctly configure the trimmer fuel assembly, without the risk of exceeding the permissible load on its main operating mechanisms.