This type of mower is popularly referred to as “electrokosa”. It also fits over the shoulder with a belt and is very easy to operate.

An electric mower differs from lawn mowers in the type of drive used in it, namely, an electric motor installed on it. Below is a diagram on which all the main components of the unit are clearly visible. 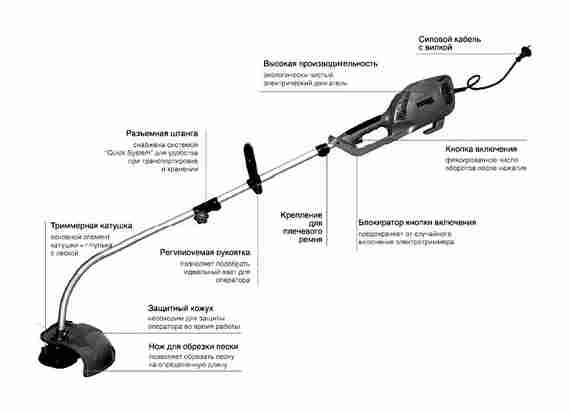 Such units are lighter than gasoline counterparts, and one button (ON / OFF) is used for control, which can be locked using the lock button if long-term operation of the unit is required.

Electric trimmers, can be produced with different engine positions.

But still, such a structure of the unit with the absence of a gearbox affects the speed of the cutting tool. Due to insufficiently high speed, such a unit can only mow young and not very dense grass.

There are also cordless trimmer models. But these devices are not able to work for a long time, and besides, they are low-power (used only for grass, not very thick and young). Since the battery needs periodic recharging, a spare battery is required to use the unit more efficiently.

Because of their quietness and mobility, cordless trimmers are often used in places where noisy machines cannot be used, such as hospitals, holiday homes and hotels. They are also very convenient to use for cutting grass in hard-to-reach places and when performing work on terrain with various obstacles. elements of landscape design, where an electric cable would interfere with movement.

How a grass trimmer works

In order to improve parks, squares, lawns near a house or a summer cottage, it is customary to use different types of equipment that effectively cut grass and small bushes. The traditional lawn mowers, the device of which did not allow mowing grass close to trees, in hard-to-reach places, on difficult terrain, etc., were replaced by more advanced and multifunctional units. trimmers. There may be differences in the trimmer design: engine location (top or bottom), as well as the type of drive: gasoline and electric.

There are a huge number of models of gasoline trimmers on the market. But, despite this diversity, they are made according to the same principle. At the very top of the trim tab there is a gasoline engine (1), a fuel tank (2) and a starter (3) for manually starting the drive. The motor is connected to the working tool by means of a rod (4), inside which there can be either a flexible shaft or a rigid one. The bar often consists of several parts (sections) and can be either collapsible or one-piece.

READ  How To Thread A Fishing Line Into A Trimmer

The handle (5) can have different shapes. It contains controls (6). The control module (6) is connected to the drive by means of a cable (7). A gearbox (8) is installed at the bottom of the device, the task of which is to transfer the rotation of the shaft to a spindle with a cutting tool (9), consisting of a reel with a fishing line (cord) or from a special knife. For the safety of the user, a guard (10) is installed above the cutting tool.

Another control element is also placed on the engine. this is a switch that changes the position of the air damper.

This switch makes it easier to start the unit. It can be used to quickly warm up the engine when the ambient temperature is low.

In turn, the handle with control elements has the following device. In the most visible place of the handle there is a button (1), which interrupts the ignition circuit. It is used to stop the engine if the need arises. The throttle trigger (2) is used to control the carburetor throttle, which is responsible for the amount of fuel supplied to the engine. The button (3) located below the Stop button protects against accidental pressing on the gas. Until the safety button is pressed, the gas trigger will be locked. In order not to constantly hold the throttle trigger with your finger, if a long trimmer operation is required, a stopper button is used, which fixes the control key in the pressed state.

This type of trimmer has an indisputable advantage over an electric one, since it is not “tied” to an electrical outlet and can be used in places far from the electrical mains.

Gasoline trimmer cutting elements are usually supplied with the unit or purchased separately, depending on the type and complexity of the work that will be performed with its help. In most models, a special spool (bobbin) is included as standard, into which a cord (line) is wound, which serves as a cutting tool.

The bobbin design allows the cord length to be adjusted almost in a semi-automatic mode: just hit the stopper lightly on the ground, and the blockage from the inner spool is removed. Further, due to centrifugal force, during the rotation of the bobbin, the cord comes out, and since there is a special knife on the protective casing, the excess edges of the line are cut off.

The instructions for the braid indicate how thick the line should be. Usually its diameter is 2-3 mm, which is enough for cutting grass and shrubs with thin stems.

To mow thicker stems of plants (reeds, sedges, shrubs), you will need to use metal knives and cutters. They usually differ in the shape and number of cutting surfaces (petals). There are cutters that resemble a circular saw in appearance, which are successfully used on powerful units. The disc trimmer is usually used when cutting young growth of trees.

Also, to expand the functionality of the lawn mowers, you can purchase (if not included in the complete set) special attachments shown in the following figure.

You should know that such attachments can only be installed on a trimmer with a collapsible bar. In this case, the device can turn into:

The method of securing the mower to your body during operation should be taken seriously. This is due to the fact that the weight of the unit with a gasoline engine cannot be called small. And if a large amount of work is performed with this apparatus, then its weight causes fatigue in the back and muscles of the shoulder girdle of the user. Belts are of the knapsack type and shoulder straps. Most home trimmers use padded, wide shoulder straps.

The operation of the trimmer with a gasoline engine is as follows:

Immediately after wound up

The unit may stall immediately after starting if the carburetor is misaligned or incorrectly adjusted. this causes uneven fuel supply. The result of this is that the device vibrates distinctly. To troubleshoot the carburetor, readjust, following the instructions for the mechanism.

Also, the engine stops when the fuel supply valve becomes clogged. In such cases, it is sufficient to simply clean it. If the lawn mower started working at first, but then immediately stalled, then it is possible that the fuel enters the carburetor unit with some difficulty. The weakening of the valve helps to resolve the issue, which ensures free circulation of the mixture in the system.

The stoppage can also be caused by air leaks in the presence of mechanical damage to the hose (holes, cracks) that takes the fuel. In this case, add more revolutions to the drive in order to quickly expel air bubbles from the system.

READ  How To Spin A Fishing Line On A Trimmer

Does the situation depend on the brand of the car

A little earlier, it was accepted that only the engine of someone from the VAZ family stalls at idle. Most of the car owners blamed the design flaws of these cars. One of the possible reasons “why it stalls on can not start the trimmer at idle speed. But later it turned out that a certain number of foreign cars, even very popular ones, also have a similar drawback. Thus, the origin of your car does not matter at all, so as owners of even the most popular brands have a chance to face this kind of trouble.

At idle, common reasons for stopping the trimmer are as follows:

If the problem area is the carburetor, then the equipment will stop at both “cold” and “hot” start.

Idle Trimmer Does Not Work EVDIRAL.RU

For what reasons Stihl 180 stalls at idle or full throttle

Any tool can break and the Stihl MS 180 chainsaw is no exception. Now let’s try to understand such issues as: why the chainsaw stalls when the speed increases, also at idle and at full speed. Let’s consider the options for diagnosing and eliminating defects associated with this behavior of the Stihl 180 chainsaw.

IMPORTANT. An experienced electrician has leaked the secret of how to pay for electricity in half, the legal way. Read more

When the air damper is opened

It happens that the unit stalls when the air damper is opened, normally idling. This is due to air leaks in the system, caused by cracks in the fuel hose or problems with the oil seals. The carburetor metering system may also malfunction, and the lawn mower will stop after opening the damper.

All possible reasons for the stalling of the lawn mower, and how to fix them, are contained in the following video

There are many reasons for stopping lawn mowers, but the most common malfunctions associated with its carburetor. They can arise in any case. The most problematic option is when a serious breakdown occurs, and you need to purchase new parts or change the lawn mower.

In order for the trimmer to work normally for a long time, you must strictly follow the instructions for use. It is necessary to fill the unit with a suitable fuel mixture for its composition, the unit should work at moderate load.