Tuning The Carburetor Of The Husqvarna 142 Chainsaw

Design and principle of operation

A carburetor is a device in which fuel (gasoline) and air are mixed in predetermined proportions, followed by feeding the prepared mixture into the engine cylinder. Almost all models of chainsaws are equipped with carburetors of the same type, so the device and principle of operation are the same.

The main structural elements of the carburetor are:

The principle of the carburetor can be described as a cycle consisting of the following steps:

When is carburetor adjustment necessary?

Initially, from the moment the tool was sold, all carburettors were adjusted and tuned at the factory. However, in the process of operation, the settings gradually get lost, and the operating mode changes in accordance with the operating conditions. Signs of a carburetor malfunction may include:

READ  How To Adjust The Oil Flow Of Your Chainsaw

It should be noted that during the running-in of a new engine, the carburetor is set to a reduced fuel supply in order to limit the engine power. After the end of the run-in, the fuel supply increases to the nominal value. These adjustments are made using the adjusting screws on the carburetor body (there are usually two or three).

To tune the carburetor, you will need a Phillips or slotted screwdriver of different lengths or thicknesses; the size depends on the design of this unit and the features of the engine assembly. It should be noted that some manufacturers make carburetors designed to use special tools.

In particular, special types of screwdrivers may be required to tune Husqvarna carburettors and other imported tools. It is advisable to clarify this question even when buying a chainsaw, so that you can purchase the necessary additional equipment in advance.

In addition, you will need refined gasoline or acetone to flush and clean the device. They are used to clean the outer surfaces of the carburetor. All internal channels are flushed with kerosene, diesel fuel or white spirit. Before flushing, the carburetor is disassembled, all rubber or plastic parts that may suffer from contact with aggressive chemical compounds are removed.

Open-end or spanner wrenches are used to disassemble the carburetor. Internal canals are flushed in specially designated trays, sometimes plastic syringes are used for this.

Here in Husqvarna 142 is a classic minimum. They are represented by a switch that takes the On or Off position, a choke position lever that can be in one of three positions, and a combined throttle position control lever with a stopper. Only “suction” is required here. Between the fixed positions of the open and closed throttle, there is a third stable position corresponding to the half open throttle of the chainsaw carburetor. It is used when starting a cold engine after several jerks with a closed choke starter. Husqvarna 142 has no primer. Primary fuel pumping is carried out using the starter handle. Well, the fewer the nodes, the fewer breakdowns! 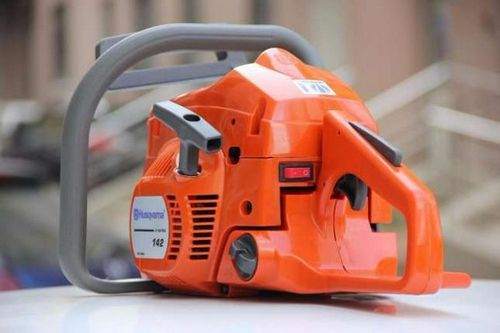 This is the only lifesaver in many situations, which is why it is never ignored in our reviews. Looks not intimidating: only 32 pages, two blank of which are for personal notes. There are no traces of translation by electronic systems, but in two places there are phrases that are slightly cutting the eyes, for example, “the spark plug does not light”.

READ  The Chainsaw Does Not Idle It Stalls

Characteristics 142 of Husqvarna are presented in full with a slight caveat. Only one Champion spark plug model used is shown. But nowhere is it written explicitly that the use of any other models is strictly prohibited due to design features. As a rule, manufacturers either indicate several suitable models, or describe in detail the characteristics of the required plugs. Therefore, the section describing the ignition system could be more informative. This remark is not important, since experienced owners know how to use specialized catalogs of manufacturers and in most cases select an analogue of any candle.

The assembly procedure for the Husqvarna 142 chainsaw is described in detail with drawing explanations.

Special attention is paid to self-correction of minor problems that arise during the work. How to troubleshoot a Husqvarna 142 chainsaw that won’t start or start and stall is described in great detail. But the section in which the carburetor setting is described could be more informative. In particular, to adjust the quality of the mixture, it is indicated what to turn, but the criterion for the end of the adjustment is not clearly stated.

In general, the operating instructions for the Husqvarna 142 chainsaw are convenient and contain the minimum necessary knowledge of operation and repair.

You can download the instruction manual for the Husqvarna 142 chainsaw on the page of our website. Chainsaw instructions.

The Husqvarna 142 chainsaw is a household tool and is used only for sawing wood materials. Its distinguishing feature: the affordability of a well-known brand is combined with impressive technical characteristics. Check out the results of our review and see for yourself.

The structure and principle of operation of the Husqvarna carburetor

To successfully tune your Husqvarna chainsaw carburetor, you need to know its design and understand how it works. In fact, everything is not as complicated as it seems at first glance.

The saw carburetor has a built-in fuel pump, which is responsible for transporting a mixture of gasoline and oil, as well as a diaphragm, a needle valve with a rocker arm. Their joint work allows metering the fuel supply to the main chamber and two dampers.

One of the valves is designed to adjust the fuel supply to the cylinder when the gas is pressed, it is called the throttle, the second is responsible for restricting the air supply from the air filter to facilitate starting a cold Husqvarna chainsaw. At the moment when the operator cuts off the air supply to the carburetor with the help of the choke, the fuel mixture becomes leaner and its supply to the cylinder increases, due to which the chainsaw starts much easier than in the case when a cold start is carried out in normal mode.

In the operation of the Husqvarna carburetor, a nozzle valve is involved, which atomizes the fuel and prevents air from entering the main chamber. Often, problems with saw operation can be caused by defects in this particular element. For example, a valve, if the chainsaw is not stored properly, may stick, the fuel supply will stop, which will make the engine impossible to operate. Also, irregularities in the operation of the injector can cause air to leak into the main fuel chamber of the carburetor. In such cases, adjusting the position of the adjusting screws will not correct the situation; repair or replacement of the unit will be required.

Three adjusting screws installed in the carburetor body are responsible for setting the quality and quantity of the mixture, as well as the number of revolutions of the crankshaft in idle mode:

The factory default setting for the Husqvarna carburetor is the position of the screws (H) and (L), in which a working chain saw is guaranteed to start. For Husqvarna tools, this is one and a half turns from fully tightened screws (H) and (L). In the process of adjustment, you must first set the screws to the standard position, then start the chainsaw and make precise adjustments to the power, the number of maximum revolutions and idle speed.

Before proceeding with the tuning of the Husqvarna carburetor, you need to take care of having all the tools that may come in handy. To carry out this type of work yourself, you will need: