How to choose an angle grinder.

Each type of grinder has a different effect on the surface being machined. But unlike tape and eccentric, angle grinder polishes most aggressively.
Peeling operations are performed by small and large angle grinders with wire brushes installed. They remove scale, rust, old paintwork and slag crust from the metal after welding, while sisal and polymer-abrasive brushes brush the wood.
Grinding with a change in surface geometry, chamfering, and sag removal is performed by abrasive mopping and blade discs mounted on angle grinders.

The weak side of the mini angle grinder is the shallow depth of the tool entry into the material. So at 115mm Sturm AG9511 the disc is immersed at 25-30 mm, and at 125mm Energomash UShM-90111 at 30-35 mm.This size of the resulting slot is enough for cutting reinforcement, angle and rolled steel with a small shelf, cutting the gates in the wall for wiring and a water pipe. But when cutting, the outer edge of the abrasive disk wears out intensively, reducing with each cut an already shallow diving depth. If the outside diameter of the snap-in is not enough for a small angle grinder, then a workpiece, for example a 57 mm pipe, will have to be cut not at a time, lowering the disk vertically, but scrolling around the circumference. Which is inconvenient, because each time you have to reload the part in a vice.

The advantages of small angle grinders.

Light weight.
A 125 mm angle grinder, such as the Union UShS-90122, weighing 1.45 kg, is easy to cut tin, for example, when bodywork with a car or tile for decoration. Hands get tired less and mini angle grinders are easier to control than average 150, 180 mm and large 230 mm models. It is easier for her to crawl for cutting from different sides to a fixed workpiece with inconvenient access.

Safer work.
During deep cutting of thick-walled parts, during the deviation of the disk plane from the vertical, it is jammed while the tool stops and is thrown to the side. Since 115 and 125 mm small grinders have a small immersion depth of the equipment in the material and their own weight, it is easier for the worker to hold the angle grinder in case of jerks. 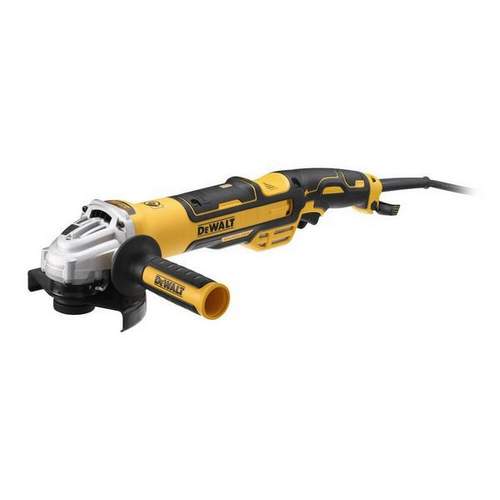 A strong grip is reinforced with ribs on the non-slip plastic of the case, like the Einhell TE-AG 125/750 or rubber pads, like the Vitals-Master Ls 1272HL.
To turn on without assistance and intercepting with the second hand, the wide Start key is installed on the side and the slide type, like the Stanley STGS9125. It does not need to be felt, it is always in the area of ​​the thumb and due to this the angle grinder is controlled even through the glove. To increase passive safety on small one-handed angle grinders, keys with a shear force above the average are set, like in the Dnipro-M MSHK-800.

Inconvenient for making precise cuts, such as cutting pores in welds of thin-walled pipelines. A weight of 6.7 kg, as with the GA9040RF01, is more difficult to control for accuracy of immersion depth. Large blade angle grinders start with a thickness of 2 mm or more, compared to 0.8 mm for small 125 models.
Even a physically strong worker can hardly cope with the force of a jerk when a tool is jammed. But a cutting depth of up to 85 mm, for one dive without turning the workpiece, can be performed only by large angle grinders, such as DWT WS22-230 D or Titan BSUM20230. Cut through more interfere with the dimensions of the body. You can also go a little deeper by tilting the angle grinder, but the cut will no longer be perpendicular to the surface.

See also  How to cut liquid glass on a table

The function of reducing the speed of rotation of the snap-in is present on all models except the 230s. For example, Intertool WT-0209 under the 180th disk or Dnіpro-M MSHK-1600R under the 150th. But most often it is installed on small angle grinders with a 125 circle, such as Proton MShU-125/1150 Semi-Pro or AEG WS12-125 XE.
On the basic 125 versions, the rotation speed is in the range of 10-12 thousand revolutions per minute and does not change. The angle grinder with adjustment has a regulator in the end of the case or at the top of the main handle, which allows them to be reduced from the maximum to 2800, like the Makita GA5040C, or 6000 rpm, like the Intertool DT-0272.

Rotary angle grinder provides more opportunities for grinding and polishing, but not cutting. Deep scratch removal is not performed at high speeds. A fur coat or foam head mounted on a rubber sole-sole will be torn off, the rubber platform will start to smoke, the polish will fly off the equipment. Traces of burning will remain on the wooden blank, and the plastic will soften and melt.
The impact of felt, foam rubber, wool, sisal or polymer-abrasive wheel is performed at low, but different speeds and the wider the speed range on the angle grinder, the more opportunities for processing.

However, the cooling system of the angle grinder depends on its rotation and at reduced speeds the motor, especially under high load, quickly overheats.For professional models of most manufacturers: AEG WS12-125 XE, Makita 9562CRV, Flex LE 14-11 125 the lower limit is 2800 rpm. On a household tool, you can also find 1000 rpm, like the Titan PSUM11125E. The operation of such grinders requires more attention from the user and periodic inclusion in the maximum idle speed mode to increase the flow of cooling air.

The requirements for angle grinders for grinding are completely different. Grinding wheels 6 mm thick are heavier and their unwinding requires additional watts. When peeling, many locksmiths strengthen the clamp, trying in one pass to remove a larger layer from the surface and crush the engine. When pressed, a low-powered engine is more difficult to rotate and it is faster to overheat.When cutting workpieces, friction occurs at the end of the disk (1-3 mm), and when grinding angle grinders, they tilt and the contact width of the cleaning disk is several centimeters.