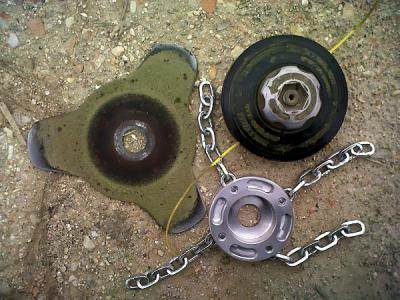 What exactly are gasoline models good when compared with electrical counterparts? Firstly, consumers note that there is no need to drag an extension cord over a section. In addition, gasoline models can be used in rain and wet weather, which is definitely impossible to say about an electric tool.

A huge advantage of these types of models is their power, the ability to work for a long time without stopping, as well as speed. The latter circumstance allows you to cough up thickets of even very powerful weeds without fear for the fate of the engine. Buyers report that they have been using gasoline “scythe” for several seasons, and with its help they mow a huge amount of grass both on a personal plot, as well as on construction sites and other facilities.

Which engine do consumers prefer?

Note that in the markets today you can find push-pull and four-stroke models. As a rule, only the first variety can be found in the lower price range. If you do not go into mechanics courses, then their main difference is the lack of a separate lubrication system.

Simply put, motor oil must be poured into gasoline. And not anyhow what, but produced by the manufacturer of the trimmer that you bought. But this is in theory: in practice, people are fine with conventional motor lubricants that were purchased at the nearest gas station. The advantages of such models are their low cost (no more than four thousand), less demanding on gasoline, as well as the simplest device. The latter is important for inexperienced summer residents who are unable to perform complex technical repairs.

However, its advantages more than cover these shortcomings. So, the power of four-stroke engines is much higher, they are much more stable at low speeds, and their piston group (subject to high-quality oil) wears out much less. If you choose such a model, and even equipped with knives, you can easily clear even the whole meadow on which hard and hard weeds have been growing for several years.

That is why in recent years, consumers have preferred four-stroke models, since they are more reliable and better suited for continuous operation.

There are two types of gas trimmers on the market today: one with an upper and one lower engine. Which one is more suitable for household needs? Let’s figure it out by analyzing the experience of customers.

Consumers say that for occasional lawn mowing, a trimmer with a lower engine position is also suitable. If you are looking for something more serious, you have to spend money on more expensive models.

On the contrary, knives perfectly grind even old, dried stems of plants and young trees. However, users are talking about the increased power and “appetites” of such a technology for gasoline.

A little bit about leaving

In any case, forget about protecting the trimmer. For example, even regular cleaning of the workspace is a measure that can significantly increase the tool life. In addition, when working in wet weather and in thickets, you can slightly cover the most exposed parts of the device. But you should not get carried away in this way, since a violation of normal engine ventilation also does not bode well. However, when working in dry and dusty areas, this measure can significantly extend the life of the trimmer.

If you regularly change the filters, this will not only significantly increase the chances of a long and happy trimmer life, but also save a lot of money from your family budget, which otherwise would have to be spent on repairs.

Cleanliness is the key to health!

Many users of such tools wanted dust and plant debris on the outside of the case. And this is the right approach! Blow all ventilation openings as often as possible, and carefully clean the ventilation ducts from dust and vegetation that has got into them. In no case is it allowed to use various metal objects (screwdrivers, for example) for this purpose. You will scratch the plastic, and scratches are an excellent springboard for the accumulation of dust and dirt. Better use a stick made of wood, the size of which is suitable for your purpose.

As you can see, your tool requires quality care, after which the trimmer will serve you faithfully not only its entire warranty period, but also much longer!

Which manufacturer to choose?

This is a “Chinese.” Models from this company cost between four and five thousand rubles. What else, besides the financial side of the issue, is the Champion petrol trimmer good? Reviews speak of the incredible power of this technique. These trimmers perfectly cut weeds and shrubs, destroy young trees and other vegetation.

This company in our country does not need to be advertised. Former purebred “German” (today part of the equipment is assembled in the same China). What attracts buyers with the Stihl gasoline trimmer? The reviews indicate that the price immediately attracts attention: it is slightly higher than for the more common and cheap models (from 7-8 thousand).

Among the shortcomings can be written quite a high price for spare parts and consumables.

Also “Chinese”, and from the cheapest. What do you get by buying a gas trimmer “Forester”? The reviews say that they will give you exactly as much as you paid. Devices with a relatively low power, very average workmanship and decent noise during operation.

And again, Chinese technology welcomes you. What is the difference between the Patriot petrol trimmer? The reviews indicate a rather good build quality for the “Chinese”, low cost and relatively low noise. Consumers notice that these trimmers start quickly, medium-sized grass is mowed without any difficulty.

The disadvantages are the same: far from ideal quality of components, why they are not too durable.

Should I buy a Meteor gas trimmer? Reviews say that this Chinese equipment is not very reliable, the quality of components in some cases does not stand up to criticism. Maybe it takes only low grass, but it is problematic to mow large volumes with it, since a high level of vibration makes the work uncomfortable.

Convenient and ergonomic trimmers of this company are perfect even for large areas.