What carburetor to put on a chainsaw Ural

Adjustment of the Ural 2T chainsaw

Adjusting the carburetor of a chainsaw Ural-2T may also involve adjusting the idle speed. The engine should run evenly and steadily at idle, while the saw chain should remain in place. It is important to ensure that the engine does not emit a large amount of smoke. It should have good injectivity. This suggests that the engine should develop revolutions quickly and easily when sharply pressing the control lever. 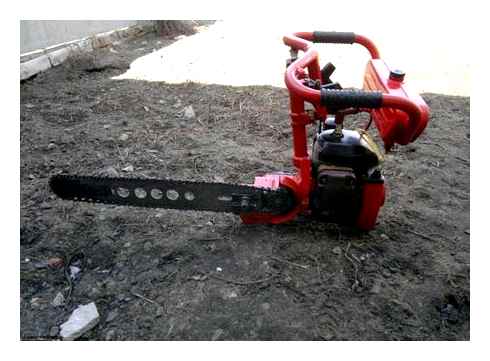 Adjustment of idling speed can be performed by starting and warming up the engine at small and medium revolutions. Minimum steady revolutions are set with the screw At the same time the chain should not move on the bar. If the engine smokes too much, it indicates a rich mixture. It is necessary to turn the screw until the RPM increases and the smoke decreases.

The speed in the next stage should be set to a minimum. For this purpose, you should turn out the screw Regulation of the carburetor chainsaw Ural 2 Electron is carried out on the same principle. The next step is to check the responsiveness of the engine. To do this, the throttle control lever must be pressed all the way in. The engine must be able to rev up. If there is a power drop, turn the screw back to the desired value. The rpm will then decrease. To increase the RPM, partially turn the screw and check the engine for acceleration. Adjusting the carburetor of a chainsaw Ural Electron in the next step involves fixing the screw number with locknuts.

The Ural-2T-Electron chainsaw has the following technical parameters:

How is the carburetor on the chainsaw Ural?

The construction of the carburetor can not be called complicated, which is clearly an advantage of the Ural 2 Electron chainsaw. The main nodes responsible for the performance of the carburetor should include:

Ural and Druzhba are very similar and were produced at the same company, but still have differences:

Modification of the carburetor of the Ural chainsaw: eliminating the factory deficiencies

Since the KMP-100 carburetor was the only one produced in the USSR, several million of them were made. With such mass production and many years of production, the product could not be crude and unfinished. All deficiencies were taken into account and finalized at the beginning of production, and factory, design and technological shortcomings KMP-100 and KMP-100U had no.

All their problems arise from improper use (poor quality fuel) or simply from physical wear and tear over time.

Carburetor KMP-100U requires modifications when the engine from a chainsaw Ural 2t Electron is used for other purposes. Like a boat motor, for example.

In this case, it is not the carburetor that needs modification, but the system of idle speed adjustment, located on the gas handle.

Setting the carburetor of a chainsaw Ural 2 electron

Often, after buying a new tool there is a thought. how to ensure its maximum durability without damage and costly repairs. Correct running-in of the chainsaw will help to guarantee such operation. To understand what is the running-in, how to do it correctly, and what it is actually needed for, will help to know the following information:

The new chain saw has been designed so that the friction in the chain saw’s inner-workings is minimized. In more simple terms, this means that all the moving parts need to “rub” into each other for continued, trouble-free operation. During this period you should put variable loads on the saw. Do not run the engine at idle for long periods, but alternate periods of light and moderate load.

Important! It is not recommended to use the saw at maximum loads until the running-in period is complete.

As a rule, the running-in of the chainsaw is made as follows:

The Ural-2T-Electron chainsaw has the following technical parameters:

After a long time of using the saw it can start malfunctioning. In this regard, the carburetor should be readjusted.

First of all, in order not to permanently mess up all settings, you should read the instruction manual of the saw. For people who do not have experience in this case, it is categorically not recommended to engage in the adjustment of the carburetor, without first becoming familiar with the technical documentation of the product.

After getting acquainted with the papers and learning the basic provisions of this process, you can proceed to the tuning.

The engine idling speed adjustment requires the following points to be performed perfectly:

It is advisable to adjust the idle speed in this order:

The device of carburetor of Ural chain-saw

While operating a Ural chainsaw different problems with carburetor operation may occur, because of using mainly low-quality fuel or violation of operating rules.And in order to try to restore the performance, it is necessary to know the structure of the carburetor of a Ural chainsaw.

See also  Which Is Better Than A Chainsaw Or A Saw

Principle of operation of the KMP-100U carburetor

The principle of operation of the KMP-100U carburetor is as follows:

Fuel from gasoline tank through fuel line and conduit.1, marked with a red arrow (see the principle diagram ) is fed through the valve-3, in the cavity 25. Fuel is then fed through inlet valve 1 to the fuel valve seat 19. Until the chainsaw engine is started, no fuel flows into the pressure regulator cavity.21 as the hole of the seat.19 is blocked by the lever.20.

When the engine starts, air rarefaction occurs in the nozzle and acts on the carburettor diaphragm.4. The diaphragm flexes upwards and moves away from the seat.19 lever-20, opening the way for the fuel to the cavity 21. Fuel flows from cavity 21 to the atomizers.9, 14 and 15 through the channels, the flow cross-section of which is regulated with the help of screws 5 and 6.

the atomized working mixture (fuel) flows into the crankcase due to the vacuum. Fuel flows from the crankcase into the piston headspace when the piston is in motion. Check valve 17 (see principle diagram) prevents the penetration of air into the cavity 21 when the chainsaw engine is running at idle through the channel with the atomizer 9. Before starting the engine, fill the carburettor cavity with fuel using the enrichment button.9.

We recommend reading on this site http://stroivagon.Ru and other articles on this topic such as:

The carburetor of the Ural chainsaw consists of the following components:

18-throttle lever,19-carburetor housing. Ural chainsaw carburetor is a reliable device, but requires mainly replacement of internal membranes and gaskets. If the chainsaw is not used during the summer and there is no gasoline in the carburetor, then the diaphragms can fail. Therefore, it is recommended that the carburetor be disassembled and the membranes be stored in a closed container with gasoline.

Or you can not disassemble the carburetor, but at least once a month to make a start the engine and warm it up for 3-5 minutes.Repair of the carburetor basically comes to replacement of the repair kit, which consists of membranes, gaskets and adjusting screws of small and full throttle. On how to repair the carburetor our next article.