What Gasoline Is Needed For A Chainsaw

Chainsaw gasoline: which one to pour? Gasoline brands for chainsaws. Mixing ratio of the fuel mixture.

Chainsaw gasoline: which one to pour?

Since a two-stroke engine is used on chainsaws, where it is structurally impossible to install an oil pump, then you cannot pour pure gasoline into the chainsaw! A fuel mixture of gasoline and oil is poured into the chainsaws. The proportions for different saws are set by the manufacturer, the specific number is indicated in the instruction manual.

The question is often asked: gasoline for a chainsaw. What to pour? I will try to answer in more detail….

For domestic chainsaws (Ural, Druzhba, etc.), AI-80 gasoline is used. Oils can be used domestically, such as M8-B (or early marking AS-8.10), M-12 TP, M-12TPU, MGD-14M. It is also possible to use oils from foreign manufacturers. In any case, the proportions when mixing oil and gasoline should be 1/25, that is, one hundred grams per two and a half liters of gasoline.
For modern chainsaws from foreign manufacturers, the proportions are usually equal to 1/40 (100 grams per 4 liters of AI-92), 1/50 (100 grams per 5 liters of AI-92). Gasoline use grades AI-92. You can often see that the AI-95 brand will be indicated in the instructions. But given our quality of this gasoline, the octane number of which is catching up with additives, I would not recommend using the 95th if you are not sure of its quality.

To measure the required amount of oil, you can use a syringe, a measuring bottle, a special dispenser or, for example, a bottle with a dispenser from Stihl.
Oils from different manufacturers in different colors. As you can see in the picture above, HP calm oil (mineral water) is red, more expensive synthetic ones are green. Husqvarna oil can be green or blue.

Remember! In THE CASE OF THE CHAINSAW OUT OF THE SYSTEM FOR THE CAUSE OF FILLING THE WRONG MIXTURE, THE REPAIR WILL BE NON-WARRANTY!

Tips:
It is better to overfill than underfill! If it says 1/50, then when you pour 25 grams per liter, terrible will not happen, since coking in this case is unlikely. But if you add 15 grams per liter, it is quite possible that this will not be enough.
Do not store the ready-made fuel mixture for more than a month (preferably less), as it loses its octane number (gasoline “fizzles out”).
Run out the entire tank or drain before the season to avoid loss of gasoline quality and wear of rubber and plastic seals.
Never use oils for mopeds. They are designed for lower rpm [/ important]

How much gasoline is stored

During long-term storage, gasoline evaporates (regardless of the brand), a sediment falls at the bottom, it loses its properties, in other words, it deteriorates. It is worth knowing that it is not the gasoline itself that ignites, but its vapors. Therefore, if there is a canister of gasoline in the garage since last year, then think, is it worth it? Better leave it to light a barbecue fire. 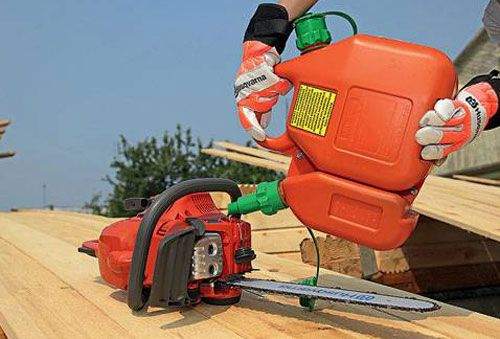 The use of “stale” gasoline for a chainsaw entails many problems:

It is worth remembering that the prepared fuel mixture (gasoline with oil) is stored for no more than a month, after this time it should be disposed of. Using an old mixture will increase the wear on your chainsaw engine parts. Don’t forget this!

This is where the fun begins. Can I refuel the 95 chainsaw with gasoline? In all operating instructions for chainsaws, manufacturers indicate in bold: “Do not use gasoline with an octane number higher than 92 for preparing the fuel mixture.”. It is understandable, but apparently not for everyone. Once from time to time, they bring chainsaws with a burnt-out cylinder to service centers!

Let’s figure out which gasoline is worth pouring into a chainsaw and which is not! For all two-stroke saw engines, you need to use 92 gasoline, the tool is designed for it. Filling 95 gasoline, the engine will begin to detonate (pushing the piston into the opposite direction), a kind of micro impact that will occur almost every revolution of the crankshaft. I think everything is clear about 98 gasoline, the effect will be even stronger, and this will already be mini strikes.

What gasoline to pour into a chainsaw

Everywhere and everywhere they write and discuss issues related to the choice of oil for a chainsaw, someone recommends only the original one, and someone “everything is fine” and on a regular Lukoil 2T! They also raise a lot of questions about mixing gasoline with oil. The process of preparing a fuel mixture for a chainsaw has any more or less human resource. But, no one ever raises the importance of the issue of using gasoline in a chainsaw! Why? After all, all technicians and engineers know how the use of high-octane gasoline affects engines designed to operate on low-octane ones! The chainsaw is no exception!

Procurement of fuel should be done counting on 3 refueling. After all, storing a large volume of fuel can negatively affect the operation of the chainsaw. The mixture can behave differently, as it will be influenced by many factors. As a result, your household unit can get serious damage, which will entail financial costs.

Sometimes even the capacity can affect the quality of the liquid. Plastic and glass react with gasoline, which can create a sudden fire hazard.

The finished liquid cannot be stored for more than a month, because the oxidation process takes place. After working with the chainsaw, use up the remaining fuel, turn off the engine and remove the remaining fuel mixture.

When using a two-stroke engine, clean fuel is purchased separately and mixed with oil, often in proportions of 1:50. It is structurally impossible to install an oil pump in such an engine, therefore, pouring pure gasoline into the chainsaw is strictly prohibited! The manufacturer indicates the proportions, quantity and some brands in the instructions for use.

Important points in the cooking process:

What gasoline should be poured into the chainsaw

Hello! Glad to see you again, dear readers and subscribers of Andrey Noak’s Blog. Everyone who has a chainsaw at home already knows exactly what kind of gasoline and how to fill it. But to those who just want to buy such a unit, the article will seem entertaining.

The chainsaw is one of the most convenient and versatile household appliances. Prepare the fuel mixture before use. But for the unit to work correctly, you must follow all the manufacturer’s recommendations. Each model is different, so what kind of gasoline should you put in your chainsaw?

Can I put 95 gasoline into a chainsaw?

Almost 75% of manufacturers in the passport for the chainsaw indicate that it is necessary to use AI-92 gasoline. Those owners of such equipment, who first encounter it and do not know what kind of gasoline is needed for a chainsaw, draw parallels with car engines and conclude that the higher the octane number, the better. As a result, not understanding how to properly dilute gasoline for a chainsaw, they dilute AI-95 oil and gasoline.

The thing is that an increase in the octane number is achieved by introducing various additives into gasoline, as is done in AI-95 and AI-98 gasoline. For two-stroke engines, additives are harmful due to their special design, so you need to use AI-92 gasoline, especially in our country. Firstly, it is correct and will extend the life of the motor, and secondly, it is cheaper. But for some manufacturers, for example for Stihl, AI-95 can also be used, but it is better to take it at good proven gas stations.

Why isn’t oil flowing to the chainsaw chain?

In the event that the oil does not go to the chainsaw chain at all, it means either the oil pump drive itself has failed, or there are problems with air suction.

Chainsaw oil: what you need to know?

Chainsaw owners know very well how to fill in gasoline for a chainsaw. But for those who just buy such equipment and do not know how to use it correctly, you need to know that you cannot just take and pour gasoline into the tank. As a result of such an erroneous action, your chainsaw will fail in a short time. The reason is very simple. For two-stroke engines, which are installed on chainsaws, there is no separate lubrication system. It is necessary to dilute the gasoline for the chainsaw with engine oil in a special proportion.

Can I put 95 gasoline into a chainsaw?

Almost 75% of manufacturers in the passport for the chainsaw indicate that it is necessary to use AI-92 gasoline. Those owners of such equipment, who first encounter it and do not know what gasoline is needed for a chainsaw, draw parallels with car motors and conclude that the higher the octane number, the better. As a result, not understanding how to properly dilute gasoline for a chainsaw, they dilute AI-95 oil and gasoline.

The thing is that an increase in the octane number is achieved by introducing various additives into gasoline, as is done in AI-95 and AI-98 gasoline. For two-stroke engines, additives are harmful due to their special design, so you need to use AI-92 gasoline, especially in our country. Firstly, it is correct and will extend the life of the motor, and secondly, it is cheaper. But for some manufacturers, for example for Stihl, AI-95 can also be used, but it is better to take it at good proven gas stations.

What kind of gasoline should you put in your chainsaw?

Manufacturers strongly recommend using only high-quality gasoline for chainsaws, with an octane rating of at least 92 and m ethanol no more than 10%. It is not recommended to use opaque gasoline containing impurities. They will quickly clog the fuel system and engine.

Important: it is not necessary to prepare the gasoline mixture for the chainsaw just before pouring it into the tank. This can be done in advance. Over, many manufacturers produce ready-made containers with several compartments, for example, for gasoline and oil or gasoline, oil and ready-mixed, and also complete such containers with a special measuring syringe. With its help, oil is collected in the chainsaw in the proportion that is required. But if the mixture is prepared in advance, then the maximum storage period should not exceed 10 days. Over time, the octane number of gasoline decreases, and due to the fact that part of the gasoline from the mixture evaporates, the proportion of oil and gasoline for the chainsaw changes.

The device of the gasoline engine for chainsaws

Chainsaws, like most other similar equipment, use two-stroke internal combustion engines. Their main advantage over four-stroke engines used in automobiles is the fact that for 2-stroke engines it is possible to remove power one and a half times more with the same volume. But there are also disadvantages. Chainsaw oil must be added directly to the fuel tank, which increases oil consumption. As a result, the mixture of oil and gasoline during combustion in the working chamber turns into oil mist, which settles on the cylinder walls and lubricates the elements of the connecting rod and piston group.

Oil for 2-stroke chainsaw engines is diluted in a certain proportion with gasoline and poured into the tank. When the gasoline in the tank runs out, it is necessary to prepare a new mixture. At the same time, you cannot use car oil in a chainsaw. You need a special oil for two-stroke engines.