What Oil Is Pouring Into A Gas Trimmer

The correct first start-up and running-in of the brushcutter are very important steps in the start of operation of a new tool. On the one hand, they make it possible to preserve the motor resource of the gasoline engine laid down by the manufacturer, since at this stage grinding of moving units and parts takes place. On the other hand, the first necessary skills for working with a trimmer are acquired, if we are talking about the first tool in my life. 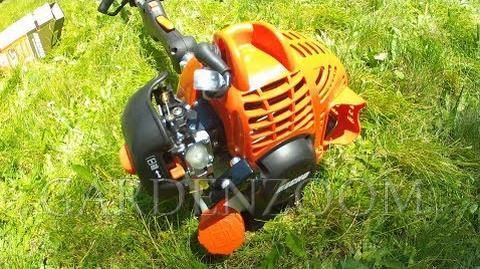 Preparing for the first launch of the brushcutter

Before you make the first start of the brushcutter, you need to perform a series of sequential actions:

We recommend that you perform them not only when buying a new trimmer, but also when preparing the old tool for the new season after storage.

Inspection and lubrication of the gearbox

Checking the gearbox before starting the gas trimmer must be done on a regular basis. The absence of lubricant or its small amount increases the friction of the gear transmission of the gearbox operating at fairly high speeds. As a result, overheating and gears occur. Motokosa reducer fails. Prevent the occurrence of such damage during operation and helps regular inspection.

If, before starting the gas spit, an insufficient amount of lubricant in the gearbox or its absence is detected, “LITOL” is put into the housing. To do this, it is necessary to unscrew the screw on the bend of the gear housing and syringe “LITOL” in the amount of 1-2 ml.

See also  The grass trimmer does not start what to do. Again, the carburetor.

When working with a gas trimmer for a long time, add grease to the boom reducer every 8-10 hours.

Before proceeding to run-in a new engine of the brushcutter, it is also necessary to properly prepare the fuel mixture. As you know for two-stroke engines, it is prepared from special two-stroke oil and gasoline, taken in certain proportions. You can find out the proportions from the instructions that came with the tool or on the lubricant label. From the instructions you will also learn the recommended type of fuel, as well as the recommended type of engine oil.

Prepare fuel in small quantities sufficient for one mowing of grass. Use special plastic canisters for fuel, or separate glass or metal utensils. Oil is best filled with a medical syringe.

According to experts, if in the instructions for the motokos manufacturers write the proportion 1:25 or 1:30, then most likely this is either a cheap tool with poor cooling, or the manufacturer does not know which oil the consumer will add. But here it must be understood that an excess of lubricant does not in the best way affect the performance of the trimmer. Excess oil does not completely burn out when the engine is running. It cokes, clogs the cylinder and piston.

What to do in this situation when running a new tool? The ideal option would be to buy exactly the oil that the manufacturer of the brushcutter recommends. In the case of run-in motors, when it is not possible to purchase the recommended oil, it is best to purchase a good two-stroke Husqvarna oil for the gasoline tool of the same name. It is not cheap, but it lasts for a long time. It must be disturbed as described in the instructions on the bank.

Remember, it is best to use the proportion that the oil producer gives. But whether the proportion written on the braid is suitable, it is better to find out by experiment. If, at the proportions recommended by the manufacturer of the trimmer, the engine sniffs with oil and smudges are visible on it, then the proportion needs to be increased.

When everything is checked and the prepared fuel mixture is poured into the tank, the time comes for the first start of the trimmer before it is run-in. To do this, perform the following manipulations:

If the first time the brushcutter does not start or stalls, slightly open the air damper on the carburetor and try to start again.

After starting, do not rush to run the trimmer immediately. Allow the engine to idle for about 5 minutes. While warming up, adjust the choke lever with the choke lever so that the spool with fishing line or knife does not rotate. As soon as the tool warms up, we fully open the air supply by transferring the corresponding lever to the “ON” position and squeeze the gas trigger by 1/2 and hold for 20. 30 seconds. Then we dump the gas, let the trimmer work for XX for 30.40 seconds. In this mode, we continue for 10. 15 minutes. Then we muffle and let rest 15. 20 minutes.

See also  Trimmer Kraton Does Not Develop Momentum Cause

Having cooled the brushcutter, we continue to run the engine according to the previous scheme. Start on a hot, trimmer must already have an open air damper. Try not to hold gas for a long time, as the moving parts of the tool only rub against each other. And do not let the engine idle for a long time as it can overheat.

The next stage is the running-in of the gasoline braid gearbox. To do this, select a site with soft young grass. We mow 5. 10 minutes with pre-gas for 1/2. 2/3 of the full throttle. After we take a break for 20. 25 minutes. The cycle is repeated 3. 4 times.

In general, the running of the brushcutter according to the described algorithm is performed until the fuel mixture is completely developed in the tank. After which the tool is ready for continuous operation. In the process, monitor the temperature conditions of the gearbox and motor. They should not overheat.