What to do if the chainsaw does not start

Why the spark plug fills up in a chainsaw

There are several reasons for this situation. In most cases, they are associated with incorrect operation of the fuel system, less often. with a defect in the plug itself or ignition system malfunctions. The products are sold with the factory settings of the elements. Therefore, you should not immediately make adjustments to the carburetor and ignition system. Most likely, the user did not read the manual or did not comply with its requirements.

The manufacturer recommends closing the air damper when starting the chainsaw. But this does not mean that the engine will run in this state. Stop turning the manual starter as soon as the first exhaust is detected. After that, the choke must be opened. If you do not do this and keep turning the starter, the spark plug will flood and the unburned fuel will collect in the crankcase.

The spark plug on a chainsaw can fill up even after several years of troublefree operation. In this case, the cause is a failure of the control diaphragm of the fuel cell. Poor-quality part material loses elasticity in prolonged contact with gasoline and the needle, which is responsible for fuel supply, remains in the open position.

During the operation of the tool, vibrations occur, which lead to changes in the adjustments. Because of this, a highly enriched mixture is obtained, which does not burn completely and partially settles on the electrodes of the plug. This causes the engine to malfunction and then to stop.

What to do if the chainsaw won’t start: an explanation of the problem

All STIHL chain saws have a two-stroke engine that starts up cold in a similar way. But there are models that have additional equipment installed that allows you to start the saw without too much effort. For this reason, their starting algorithm may be slightly different.

Let’s consider how to start an ordinary saw and how the process differs from starting a modified model.

What sets the chain in motion

The design of this tool is based on a two-factor carburetor-type engine. Its power can vary greatly. it all depends on what the saw is designed for: if for domestic work, it will be about 4 kW, but if for felling large forests, then about 8-9 kW.

Of course, in addition to the engine, the product has many mechanical and electronic elements, like quick brake, filter, oil system, etc.п., but it is the engine that matters to us in the first place, since it most often contains the problem of stopping the chain.

Your chain saw will not start. Why? Causes and how to avoid.

Your chainsaw won’t start? Often this can happen at the most inopportune moment when you need to work urgently. You’ll agree that this is unpleasant. We must admit that chainsaws from reputable manufacturers (STIHL, Husqvarna, Echo, Solo, etc.) do not start much less often than those from Chinese producers. Today we’ll analyze the causes of this unpleasant event and how to avoid it. If you can’t find your own cause among those listed, you can ask a question in the discussions.

To begin with, we need to determine whether you have a new chainsaw that won’t start or has been in use for a long time. This is important so that you can take steps to correct the problem.

If you have a new chain saw that won’t start, then:

Let’s look at the reasons why the chain saw fails to start, in the order of testing.

You can help rank chain saws by voting in the poll: Ranking chain saws

The first and practically the main element of a chainsaw is the engine, namely, the carburetor two-stroke engine (see the. carburetor adjustment). Its power output is variable, depending on the model of the machine and its intended use. So, for example, the power of a chainsaw Ural is 3.68 kW.

The second no less important part of the tool is a headset (saw), which consists of a chain (cutting), bar, sprocket, wheel (chain). To this it is worth adding that absolutely different manufacturers provide their specific range of this headset.

The important thing is that it should always be selected directly to certain engine characteristics. As the larger step has such a set, the deeper will be the cut of the chainsaw, we can even say that the more powerful and productive it will be. But let’s not forget that to work properly, the engine also has to be as powerful as the chainsaw.

Its lubrication is carried out through a special oil directly from the tank of the second, which is located on the hand block. It is worth noting that the mass of this kind of tank has such features that oil and fuel, which is designed for the engine ends at the same time.

In general outline with the device understood, but most likely with its basis, and now it is time to begin to understand why the chainsaw has stopped working, what could be the cause and how to eliminate them.

The second one is the carburetor

Do not disassemble the node at once, especially if the engine stalls after starting or does not hold idle. First try to change fuel, maybe there is too much oil in it. You can squirt some air cleaner in the air filter, give the engine a little time to “dry off” at high RPM.

Then go in order. air filter, fuel filter (it can be outside and in the tank), fuel pump button, hose integrity. Gas tank plug. the vent valve might be clogged, the motor just won’t pump gasoline. All blow out and it will work!

Be sure to look at the carburetor connection to the intake manifold! If there sucks air and there is no tightness. remove!

Dispensing needle gets stuck, also a problem in some models. It is enough to push it down or remove it and grind it with velvet. 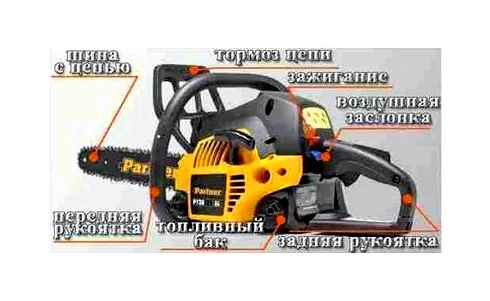 You can remove the hose from the carburetor to see if the fuel goes to the carburetor when priming. It is clear that often to check it you need to remove the plastic cover and break your fingers against the latches, but sooner or later you will have to get there.

It is known that in order for a chainsaw to start properly, there must be compression in its engine. It is necessary for normal compression of the fuel mixture in the engine cylinder, as well as it affects the work of the gasoline pump.

See also  How To Remove The Drive Sprocket On A Chainsaw

When the machine is running, compression drops, and the chainsaw becomes difficult to start.

Causes of the lack of compression, or its decrease, can be natural, t.к. Engine wear out in the course of operation. Also, problems can be caused by serious damage, such as scored cylinder heads or broken piston rings.

A sign of low compression, is a weak starter resistance. If compression is low, chainsaw power output will decrease, what negatively affects its performance. the problem can be solved by replacing the piston rings or the cylinder/circuit board.

Improper carburetor adjustment may cause your chainsaw not to develop full power. Will have difficulty starting or will not start at all. Setting the carburetor directly affects the quality of the fuel-air mixture, which is necessary for normal start and further operation of the engine.

If the carburetor is not properly adjusted, there will be more or less gasoline in the mixture of fuel and air than required, and the mixture will not ignite even with normal spark formation. 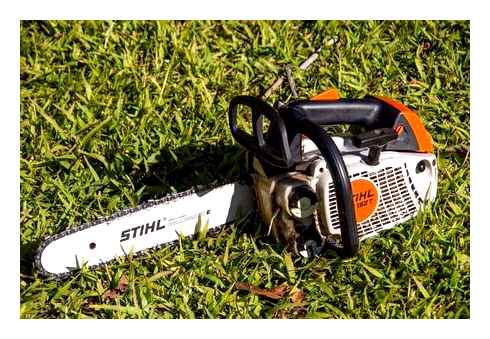 The spark plug is one of the main components of the ignition system. Its electrodes produce a spark, and if this element fails, it will be difficult or impossible to start.

MOST READABLE FROM PARTNERS

The spark plug may fail completely, or work intermittently or give a weak spark. Checking the spark plug is simple enough, this requires unscrewing it from the engine, connect it to the cap of the high-voltage wire and, putting it on the cylinder, pulling on the starter. If the spark plug is good, the spark is strong with a bluish tint. Weak spark with a reddish tint, a sign of a problem. The defective spark plug needs to be replaced.

The ignition coil can be the reason why a new chain saw does not start or starts poorly. Modern chainsaws are equipped with electronic ignition coils. This part can not be repaired, and, as a rule, if there is a defect, it is completely replaced.

The clearance between the ignition coil and the flywheel

Improperly set clearance between the flywheel and the ignition coil contacts affects the quality of the spark formation, which in turn is responsible for a normal start and stable engine operation.

Almost all recent chainsaw drives are equipped with easy-starting systems and electronic ignition, decompressors and booster pumps. On the question of why the chainsaw does not start with such a rich equipment, the specialists of the service do not give an unambiguous answer. 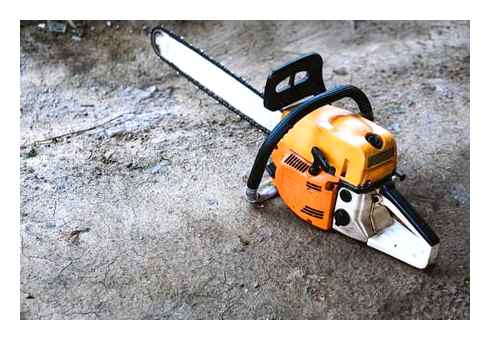 Depending on the class and purpose, domestic and professional models are equipped with similar in design carburetor power units that run on high-octane automotive gasoline with a small admixture of engine oil for two-stroke engines.

Working volume of chain saw engines varies from 26 to 60 cm3, power from 1 to more than 6 liters.с. The chainsaw drives are characterized by maximum compactness, easy maintenance, access to the setting points. Standard uptime for budget models is 1,500 hours, for brand-name models more than 2,000 hours.

What to do if the chainsaw won’t start

Good afternoon, dear readers and subscribers of my blog! At one inopportune moment you may find that your chainsaw won’t start. But do not rush to immediately surrender the tool for repair, you may be able to fix it yourself. I will tell you what to do when the chainsaw will not start, and how to find the right solution to this problem.