Where is the Husqvarna Chainsaw Breather

In addition to the above units, chainsaws have a cleaning system for the air supplied to the carburetor, a tire with a saw chain, a starter, a chain tension mechanism, ignition, a silencer, etc.

The chainsaw engine has a maximum speed of about 13,500 rpm. This imposes stringent requirements on the oil added to the fuel mixture.

At low speeds, elements with friction pads (1), which have a degree of freedom in the radial direction, are attracted to the center of the shaft by springs (2) and do not transmit rotation to the drum (3) connected to the chain drive sprocket. When the engine speed of the chainsaw reaches values ​​at which the centrifugal force exceeds the force of the springs, the friction segments are pressed against the inner surface of the drum and begin to rotate it. As a result, the drive sprocket starts to rotate, driving the saw chain.

As you can see in the photo, the sprocket is behind the clutch.

For other chainsaws, the sprocket may be on the outside of the clutch.

The main advantage of clutches of this type is that when the chain is jammed, the clutch of the chainsaw slips without shutting down the engine and without breaking the mechanisms that transmit movement from the engine to the chain.

Electronic ignition of a chainsaw includes a flywheel (1) with built-in magnets, an ignition module (2) with an electronic circuit, a spark plug (3) and a high voltage wire (4). A rotating flywheel with magnets induces an emf in the module, which is converted using an electronic circuit into electrical signals supplied to the candle. As a result, a spark ignites between the contacts of the latter, igniting the air-fuel mixture.

Below is a diagram of another carburetor chainsaw.

Carburetors have a throttle valve that allows lean or enrich the mixture depending on working conditions. For fine tuning, there are several screws that can be used to adjust low and high engine speeds, as well as idling. An air filter is installed on top of the carburetor to clean the air entering it.

So that, as the fuel mixture is used up, the fuel tank is filled with air and negative pressure is created in it, which will not allow fuel to enter the carburetor from it, and so that fuel does not leak out of the air hole, a cover is made in the lid that closes the filler hole breather. And by the way, if the breather clogs up with dirt, then the chainsaw stalls.

From the tank, fuel is pumped through a hose freely hanging in the tank. Due to this, regardless of the position of the chainsaw, the hose is always immersed in fuel. A fuel filter is attached to the inlet end of the hose. Fuel pumping pump inside the carburetor.

READ  How to Install a Chain on a Chainsaw

To facilitate starting, part of the chainsaws is equipped with a manual pre-pump. By primer. When starting a chainsaw with a primer, the carburetor is filled with fuel in advance (excess fuel flows back into the tank). Thanks to this, the engine starts faster, because the stage of filling the carburetor with fuel has already been completed, which without a primer is performed by the carburetor pump due to the starter.

Pre-filters can have a different design and consist of several elements, in particular, from a mesh (2) and snow (1) filter (see photo below).

The latter prevents the ingress of snow into the air purification system and is used only in winter, when it is removed at plus temperature.

Some chainsaw models use pre-treatment air purification using centrifugal forces. The air flow is twisted by a flywheel impeller, as a result of which impurities are thrown away from the suction pipe, which goes to the fine filter.

Fine filters are made of diffusion foam, nylon mesh and other materials.

During the operation of the chainsaw, the air in the zone of its operation is highly contaminated with sawdust and wood dust. Excessive pollution of the filter reduces the amount of air entering the carburetor, which leads to enrichment of the mixture and a decrease in the power of the chainsaw. Therefore, regular cleaning of the filter is necessary. It should be carried out not only when the chainsaw is being disassembled for the purpose of repairing it, but much more often, after any lengthy and dirty work. Cleaning is carried out by a method that depends on the type of filter material. Most often by blowing and rinsing.

The starter mechanism consists of a drum (1) with a cable (2) and a handle (3), and of a frame (4) with a return spring. When the handle is pulled up sharply, the drum ratchet engages with the teeth on the engine shaft and cranks the crankshaft. When you release the handle, the return spring returns it to its original position.

It takes some effort to crank the crankshaft at the speed at which the engine starts. It is often not possible to start a chainsaw with one jerk, you have to pull several times. To facilitate startup, use various methods. Enriching the fuel mixture with a carburetor damper, or reducing the pressure in the cylinder using a decompression valve (to facilitate cranking). The valve is automatically closed when the pressure in the cylinder increases when the mixture ignites. Sometimes, an additional spring is used in the starter mechanism, which, when pulling the cable, first contracts, and then abruptly opens, spinning the motor.

READ  Installation Of A Chain On A Stihl Chainsaw

The main and most complex links in the chain are cutting links, which are divided into right-handed and left-handed. The upper edge of the tooth. The widest of all elements. It provides a wide cut, eliminating the jamming of the remaining links.

The shape of the cutting teeth can vary significantly between chains of different manufacturers. There are two main forms. Chipper (a) and chisel (b). However, there are various intermediate contours of the incisors.

Tooth cutting edges. Lateral and upper. Sharpened at a certain angle. For chains of longitudinal sawing it is 10 °, for transverse. 30 °. Longitudinal chains are rarely used. If necessary, longitudinal sawing can also be done with a cross-cutting chain. Read more about the chainsaw sharpening angles in the article Sharpening chainsaw chains.

Important characteristics include shank thickness. Five standard thicknesses are available: 1.1, 1.3, 1.5, 1.6 and 2 mm. The most common are chains with a liner thickness of 1.3 mm (0.05″) They are widely used both on household and professional chainsaws. The thickness of the guide links must be consistent with the groove width of the guide bar so that the saw chain fits the guide bar exactly. 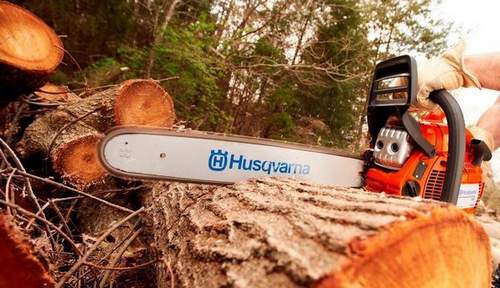 Chain manufacturers use different technologies for their manufacture and use different materials. The defining characteristic of the latter is not hardness (too hard teeth are difficult to grind by hand), but viscosity and impact resistance. They determine the durability of the chain. Therefore, in the manufacture of cutting teeth wear-resistant alloy steels are used. Cutters are often chrome plated to increase surface hardness. Some firms use bead blasting to increase the viscosity of the teeth.

READ  How Much Oil To Pour In Gasoline For A Chainsaw

To guide the chain, the tire has a guide groove at its periphery, in which the driving links of the chain are moved. The groove in the groove serves as a conduit for oiling the chain. The main parameters of the tire include:

The brake circuit can be contact and inertial. The first occurs when the brake stop (1) is pressed on the worker’s hand, which occurs spontaneously when the saw is thrown away. The displacement of the stop resulting from this causes the brake band (2) to be tightened on the clutch drum and stops, as a result of which the saw chain also stops.

The inertial application of the brake is based on the inertial forces arising from a sharp blow to the tire acting on the brake elements, which leads to the same result as in the first case. Tightening the brake band and stopping the chain. Inertial brake application is faster than contact. However, the second is more reliable. Any preparation for work, as well as the assembly of a chainsaw after its repair or maintenance, should end with a check of the operation of the chain brake. If it does not work, the saw should be considered malfunctioning.

For added convenience, the chain tension screw may be located on the side.

Oil pumps have a different design (piston or diaphragm type) and are made of different materials (metal or plastic). They are driven by a gear train, which receives its movement from the drive sprocket. When the engine is idling (the drive sprocket and chain do not rotate), oil is not supplied. Pump performance depends on the number of revolutions of the drive sprocket; the higher they are, the more oil enters the saw chain. Some oil pumps have a manual capacity adjustment mechanism. With the adjusting screw (1).