Working with a circular saw on wood

Rapid heating of the gearbox occurs if the shaft bearing has become unusable, on which the gear is fixed and the equipment is attached. In this case, in addition to heating, you can replace the appearance of extraneous noise in this unit of the device. It is necessary to disassemble the gearbox and change the bearing. Also, the gearbox will warm up if there is not enough lubricant in it or it is completely absent.

How to repair a circular with your own hands

A circular hand saw is a fairly practical tool with which you can quickly cut a piece of wood of any length and width along or across, cut any sheet material on a wood basis. In addition, after changing the equipment with a circular saw, you can cut plastic, metal corrugated board and corrugated sheet. Despite the simplicity of design and high reliability of this unit, it is susceptible to breakdowns, like any power tool. But in most cases, you can repair a circular saw yourself at home.

Engine is warming up

The machine may become extremely hot, for example, when using it intensively, when cutting hard wood or using a saw blade with a large number of teeth, when the load on the engine increases significantly. Also cause overheating of the motor, malfunctions associated with the stator and armature windings, which are eliminated only in the service center.

Saw not picking up power

If, while using the unit, you notice a drop in its power, then it is first recommended to check the voltage level in the network. Sometimes even a slight drop can negatively affect the power of the power tool.

Also, a loss of power can be observed with wear of the armature bearings or the gearbox bearing. In this case, extraneous noises will be heard that were not previously characteristic of this unit. By their localization, you can determine where the problem bearing is located. in the gearbox or engine. To replace the bearings, you will need to disassemble the saw blade. How to do this was described above.

If during the operation of the unit, extraneous noise is not heard, and the engine still develops speed and power poorly, then pay attention to its manifold. You can usually see a circular spark (ring of fire) on it. This can be due to the turn-to-turn closure of the armature coil or the accumulation of dirt between the collector lamellas.

Open the motor housing and carefully inspect the manifold (the place where the brush electrodes slide). It consists of parallel strips (lamellas). There is a small gap between them. When this gap is clogged with conductive graphite dust formed during wear of the brushes, a short circuit occurs between the lamellas, and a burning ring appears around them. 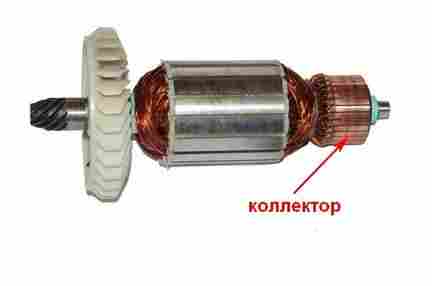 The problem will be solved by replacing worn brushes and cleaning the gaps between the lamellas with a toothbrush, cotton wool and alcohol, followed by polishing the plates with fine sandpaper.

In some cases, a power drop can be caused by a faulty start button. If a tester check has confirmed its failure, then the part should be replaced with a new one, since it cannot be repaired.

Main malfunctions and their symptoms

Typical malfunctions of hand-held circulars include the following situations.

See also  How to cut corners with a crosscut saw. What can be used instead of the crown molding?

The device and principle of operation of a circular saw

A hand-held circular saw differs from a miter saw in the absence of a bed with a rotary table, as well as in the placement of the handle. But in general, both models are similar in internal structure, principle of operation and do not differ in the complexity of the design. The following figure shows the device of a hand-held circular saw.

This tool works according to the following principle. Mains or battery power is supplied to the start button, which breaks the circuit. When you press the start button, the current begins to flow to the electric motor. Below is the wiring diagram of the unit.

The electric motor starts and transfers the rotary motion through the gearbox to the saw blade. The unit is installed using a soleplate on a workpiece or a guide rail, after which the process of both longitudinal and transverse sawing is performed.

Almost all malfunctions of electric circular saws cannot be eliminated without disassembling the device partially or completely. Complete disassembly of an electric hand saw using the example of the Interskol unit is performed in the following order.

Insert a screwdriver into the gap between the body of the shield and the sole, then push it aside and remove.

Next, disconnect the unit’s gearbox by unscrewing 2 screws.

Removing one half of the handle, you will see the soft start module and the start button.

This concludes the complete disassembly of the circular saw.

Strong sparking from under the brushes is caused by excessive wear, when the spring can no longer press the electrodes against the collector with the required force. To replace the brushes, you need to disconnect the motor cover or remove them through the special holes in the motor housing (depending on the saw model).

An example of using household and professional tools

If you are looking for a handheld circular saw, which one to choose, you can decide by reading the guidelines below. If you use a professional model, then in 1.5 hours of continuous work you will be able to cut such a number of chipboard blanks, which will be enough to assemble 4 cabinets. If you use a conventional household model, then the same work will take 2 times longer. The quality will remain at its best, but the cost of a professional tool will be 2 times higher.

Sometimes an angle grinder for wood (an angle grinder, or “angle grinder”) equipped with a small diameter saw blade is used as an alternative to a circular saw. In principle, such a solution makes sense, but only for performing individual operations.

If you have to cut a lot and often, then electric circular saws for wood demonstrate an advantage in a number of parameters:

For some operations, you can also use a standard “angle grinder”

However, the grinder also has advantages:

And yet, consider the “angle grinder” as a complete replacement for the saw is not worth it. You can make several cuts with it, but for construction or furniture work, you definitely need an easel or hand-held circular saw for wood.

A circular saw. How to cut it

The main stages of working with the tool:

For about 30 years, the circular saw was found only at sawmills. Many private craftsmen are already thinking about which model of such equipment to choose. If you also decide to acquire a similar device, then it is important to consider the main characteristics, among which, for example, a power supply.

Tips on choosing a professional saw or a household saw

Quite often, a hand-held circular saw is required during construction work. We recommend that you read the selection tips before making a purchase. The above model is a powerful saw that can be used to cut large pieces of wood and other materials. The model is designed for active operation, is highly durable and has a wide range of functions that ensure safety during operation. How to choose a hand-held circular saw? The parameters are the decisive criterion. Below we will talk about them in more detail.

This model of power tool is used for sawing a variety of materials, including planks, laminate and plywood.

The maximum possible cutting depth with this circular saw is 63 mm. The model is equipped with a 1600 W motor and is designed to work with a 190 mm disc. Safe and comfortable work with the saw is provided by a locking mechanism against accidental activation, a spindle lock and an adjustment of the cutting angle.

This part of the saw is one of the most important, as the movement and movement of the workpiece depends on it. With a properly functioning guide bar that slides easily and does not jam, you can be sure that any material will be processed properly.

Structurally, these saws do not differ from most similar devices. This tool looks like a steel disc equipped with special teeth, which is connected to the motor that drives it. Depending on the configuration, some models may contain different types of blades, a device for removing sawdust, etc. There are also tabletop models for use in industrial production, in particular, for active cutting of plexiglass products.

Preparing to saw with these saws requires choosing the right blades. So, for cutting plexiglass, it is recommended to choose a consumable with a density of teeth of at least two per one centimeter. It is desirable that the blade has a carbide coating to obtain the smoothest possible edge.

The choice of devices for cutting materials is wide enough today. For this purpose, you can use laser cutters, hacksaws, and many other technological devices. But even with such a wide variety of sawing devices, circular saws are still considered the most practical. Their main advantage is that they allow you to cut in a straight line quickly and without much effort.

In the domestic market, these saws are offered in a wide range. The products from the Russian manufacturer Interskol are well-known. It is the saws under this brand that are preferred by most of our compatriots. This choice is also explained by the fact that these saws are suitable for sawing various types of materials.

Sawing materials using the Interskol saw follows the same algorithm as in the case of any other similar tool. However, there are a number of important points that must be taken into account while working.

Some materials can get very hot during sawing, especially if it becomes necessary to cut the plexiglass. This problem is solved by cooling the working surface with ordinary water, which avoids melting the edges of the saw cut. A proven practice is to apply wax or soap to the blade surface to improve cutting performance.

Today, the market offers not only manual, but also stationary varieties. The difference between them is that the latter have a larger support area, large dimensions and low mobility. However, for use in industrial production, this is the most convenient option.

One of the important working units in the construction of the saw. The efficiency and reliability of the engine depends on it. In terms of its design, the anchor is a rather small piece. However, if this seemingly insignificant element fails, then the entire machine will have to be completely repaired. over, in order to disassemble the saw and pull out the anchor, you will have to seriously try. But you can easily avoid frequent breakdowns of this element if you choose from models that use a reliable anchor.