The Stihl MS 180 chainsaw is considered one of the most reliable tools used for working in garden areas. But any equipment has situations when it for some reason does not start. Let’s look at the main malfunctions due to which the Stihl 180 does not start or starts poorly and how to eliminate these malfunctions.

There is no spark on the Stihl 180 chainsaw

The main malfunction, due to which the stihl ms 180 chainsaw does not start, may be the absence of a spark between the electrodes on the spark plug. Signs of this malfunction can be detected if you unscrew the candle and inspect. Having found during inspection that the candle is wet, it is necessary to start searching for the cause of the absence of a spark in the spark plug.

The first thing to do is to check the operation of the candle. 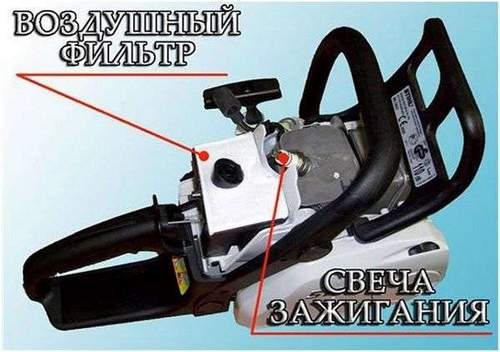 This is pretty easy to do. The candle is inserted into the cap of the high-voltage wire and pressed against the cylinder of the engine, after which the starter moves several times, if there is no spark between the electrodes of the candle, then it is faulty or the ignition module is faulty.

The spark test for sparking is carried out with the ignition on.

In order to know for sure that the problem is in the spark plug, it is necessary to check a known good condition in a similar way. If a spark appears as a result of the check, then the problem is found and to fix the problem we replace the candle with a new one.

There is no clearance between the flywheel and the ignition module

In some cases, the absence of a spark on the spark plug is due to an incorrect gap between the contacts of the ignition module or the flywheel. It may be larger, and it may also be completely absent, and then scratches resulting from contact with the coil contacts will be observed on the surface of the flywheel.

If after such an adjustment of the gaps a spark appears, everything is in order, you can continue to work with the Stihl 180 chainsaw, if not, you need to re-inspect and check whether the flywheel touches the coil contacts again. Suppose, as a result of the check, it was found that after adjusting the gap, it was gone again. So the reason, most likely, in the bearings of the crankshaft.

If the crankshaft bearings are defective, a slight play is observed on it. You can check for play by tapping the Stihl 180 chainsaw handwheel from side to side. If there is a backlash, then under the influence of its magnets, the flywheel is attracted to the contacts of the ignition coil, because the backlash on the bearings allows it to do this and as a result the spark disappears.

It is better to replace the crankshaft bearings in a specialized service, because when replacing it will be necessary to completely disassemble the Stihl 180 chainsaw and remove all its main components.

Without certain experience or at least the skills to repair similar chainsaws, it is impossible to replace the crankshaft bearings in a quality manner.

So, we figured out the lack of spark, but what to do if there is a spark, but there is no answer to the question why the Stihl 180 chainsaw does not start. The reason may be hidden in the fuel system.

In some cases, as a rule, if there is a spark on the spark plug, when inspecting it, you can notice that it has a wet coating, this indicates an excessive supply of fuel to the combustion chamber and, as a consequence, the inability to ignite the fuel mixture.

In the people, the phenomenon in which a spark cannot ignite a large amount of fuel is usually called filling a candle. The cause of the malfunction lies in the carburetor, or in the improper start of a cold engine. If a malfunction is detected, first you need to “purge” the engine.

Important: in no case do not purge the engine with the ignition on and near an open flame.

If the Stihl chainsaw is all right and the cold start algorithm was simply violated, then after the “purge” it should start up. Otherwise, the fault must be sought in the carburetor.

This type of malfunction, like the rest, has its own characteristic feature. It consists in the fact that the working spark plug, on which there is a spark, will be completely dry. Check for suspicions of a lack of fuel supply using the following algorithm.

If, after several movements, the Stihl 180 chainsaw starts up and stalls immediately, it means that the suspicion of a lack of fuel supply has been confirmed and you can proceed to further diagnostics of the fuel line.

As a rule, the diagnosis of the fuel supply system begins with a check of the state of the fuel filter. To do this, unscrew the tank cap and, using an aluminum wire bent at the end, remove the fuel hose from the tank with a filter at the end.

Having taken out and dismantled the filter, you can try to blow into it, if air does not flow, then the problem has been found. If everything is in order, then you need to check the system for clogging.

To check the fuel supply hose, it is necessary to disconnect it at the place where it connects to the carburetor, and then blow into it. A clogged hose can be cleaned mechanically; if this is not possible, replace it with a new one.

In the case when the supply hose and fuel filter are normal, and the fuel supply is not observed, the reason may be hidden in the malfunction of the air pulse to the fuel pump.

The fuel pump on the Stihl MS 180 chainsaw is installed directly in the carburetor and operates under the influence of pulses from the crankcase of the Stihl 180 chainsaw. The pulse is transmitted through the pulse channel in the rubber pipe connecting the cylinder to the carburetor.

A clogged channel is fraught with the appearance of problems with the fuel supply or its complete absence. To check the pipe, it is necessary to remove the air filter housing and the carburetor, after which with a thin metal wire check the channel for blockage.

All rubber parts of a Stihl 180 chainsaw should be periodically inspected for cracks. If defects are found, defective elements must be replaced with new ones.

Another reason associated with the lack of a pulse in the pipe channel is the depressurization of the crankcase, which results in air leakage from it and a decrease or complete cessation of its supply to the fuel pump. The result of depressurization is a partial or complete loss of operability of the fuel pump. To check the tightness of the crankshaft oil seals, and indeed the Stihl 180 chainsaw crankcase, a special vacuum gauge device is used, and since it is a special-purpose tool, it is mainly available only in service centers. The question is, what to do?

Check the pulse, you can use a syringe on the engine with the carburetor removed. You will need to draw a little oil into the syringe to lubricate the engine and squeeze it into the pulse channel of the pipe, and then pull the starter. If the impulse does not pass, the oil will remain in the channel and you should look for the cause deeper, disassemble the engine and check the seals. If the oil is squeezed out of the channel, then the problem may be hidden in the fuel pump itself.

The main element of the fuel pump is a special membrane that moves in the pump housing. When it breaks, the fuel supply to the carburetor and the engine of the Stihl 180 chainsaw stops. The integrity of the membrane can be checked visually with the fuel pump cover removed; if there are defects (tears, cracks), it can be replaced using the carburetor repair kit.

CHAIKA.NET 2021
We use cookies to ensure that we give you the best experience on our website. If you continue to use this site we will assume that you are happy with it.OkPrivacy policy