A chainsaw is an indispensable tool, both in a private household and in a summer cottage. But even the most reliable “iron” assistant starts to mope, it either won’t start, it stalls. There can be many reasons, both related to the quality of the fuel mixture and the engine.

There are a lot of nuances, we will not consider all of them in this article. And we’ll take a closer look at the part of the engine that is called the carburetor. And we will try to find the answer to the following questions: when is the carburetor adjustment of the chainsaw necessary and in fact, what is the scheme of such adjustment.

Before proceeding with the adjustment, you must know the device and the principle of operation of the carburetor. This will help to avoid many “complications.” So, for starters, recall the principle of operation of an internal combustion engine. There is fuel in the cylinder, during combustion a small “explosion” is created which creates a lot of pressure. This pressure pushes the piston, the piston, having set in motion, rotates the crankshaft. Ultimately, the pressure energy is converted to torque, which drives the chain through an asterisk.

During normal operation of the engine in each cycle, it burns up to 10 milligrams of fuel. And the fuel mixture is prepared and fed in the carburetor.

Thus, the purpose of the carburetor is to mix in the required proportions the combustible mixture with air. If these proportions are violated, the engine is disrupted. For example, when mixing little fuel comes in, and on the contrary there is a lot of air, then such a mixture is called “poor”. And vice versa, if there is not enough air and there is a lot of fuel, then this is a supersaturated mixture. Both cases lead to malfunctions in the normal operation of the engine and require adjustment. 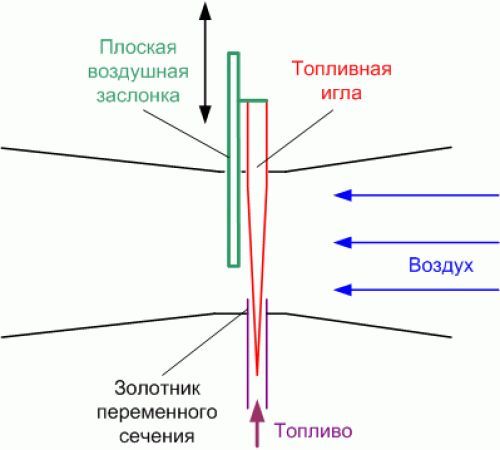 The carburetor consists of the following basic elements, and although the design may differ depending on the model, the device and the principle of operation are approximately the same:

See also  Proportion of Oil and Gasoline For Husqvarna Chainsaw

The principle of operation of the carburetor is as follows. A quick air stream flows through the air channel, its speed will also depend on the position of the damper. The level of the float provides the degree of opening of the fuel supply channel and depends on the position of the same air damper. Air flow, passing through the diffuser, picks up the incoming fuel, atomizes it. At this moment, a mixture forms, which is sucked through the inlet pipe into the cylinder.

In the float chamber, the pressure level is approximately equal to atmospheric, but in the air channel it is rarefied. Due to the pressure difference, the fuel is sucked through the nozzle into the air duct. The more the air damper is open, the greater the flow of air, and, accordingly, the more fuel flows. Fuel. Engine speeds increase.

This is the principle of carburetor operation. There may be nuances in its structure, but knowing how a simple carburetor works, you can always understand and determine the purpose of other elements.

In general, the need for adjusting the carburetor of a Stihl chainsaw, or any other brand, is quite rare. The signs of an unregulated carburetor are indicated by:

By itself, the adjustment goes astray in very rare cases, namely:

See also  What oil is right for a chainsaw?. The consequences of unjustified economy

Although quite rare, carb adjustment may still be required. Just note that not everything can be done independently, unless you have a tachometer and at least see firsthand how to do it right.

To adjust the carburetor of the Makita chainsaw, like most other models, three adjustment screws are designed. Although some manufacturers carefully removed two of them, leaving only one user for experiments. So, the three screws on the carburetor body are indicated by the following letters:

In general, the carburetors are already adjusted by the manufacturer for optimal operation, and the screws are designed to more accurately adjust the carburetor of the Champion chainsaw and others, in difficult climatic conditions, such as highlands, etc. Since the air there is more rarefied, a more precise adjustment is necessary for the tool to work. Under normal conditions, this is not necessary.

To adjust the carburetor of the Goodluck chainsaw, as well as other brands, two screws L and H are used to create the appropriate quality of the fuel mixture. To create a lean mixture, the screws are rotated clockwise, this allows to increase the number of revolutions, i.E. Thus, set high speed. Accordingly, when turning the screws counterclockwise, the mixture is more saturated, this regulates the low number of engine revolutions. Thus, when adjusting the carburetor of the Partner chainsaw by turning the screws clockwise, we increase the number of revolutions, counterclockwise. We decrease.

At any adjustment of the carburetor of the Chinese chainsaw or other, it is necessary to observe a number of requirements:

And do not forget about our own safety, the chain should be directed in the opposite direction to us, the saw should stand firmly on a flat surface and not touch the cutting part of any objects. With fine adjustment, the screws are adjusted in the following sequence L. H. T. Using screw L, you must “find” the maximum number of engine revolutions. To do this, turn the screw clockwise, or in the opposite direction, until we “find” the maximum. This is where you need a tachometer, or sensitive musical ear, and you should know the sound of the engine’s maximum RPM, if you overdo it, especially with the H control, the engine will fail. Repair will cost a good penny, therefore we strongly recommend entrusting such work to a professional.

See also  How to choose a chainsaw chain.

If you have a tachometer and know the maximum number of revolutions of your engine, then you can at your own peril and risk try to bring the adjustment to the end. It will look something like this: we find the closest possible speed value to the regulator L, then we return the same regulators counterclockwise to the fourth part of the screw revolution. We leave and go to the regulator H, and if it is twisted excessively, the engine will fail.

We turn this regulator by ¼ turn of the screw counterclockwise (we warm up the engine before this). We carefully listen to or focus on the tachometer. If the sound is our ideal, when the engine runs at maximum it works like a four-stroke engine. If the mixture is too rich, the sound squeals. You can try to achieve an average value, not have an ideal, but remove the screeching sound with a screw. And if you are satisfied with the work of the saw it is better to leave it, as it is, it is better than to remain without an engine.

If it was possible to more or less adjust the screws L and H, then there was a little thing. To adjust the idle speed. The ideal here is to ensure uniform operation of the engine in all positions, until the chain starts to move. Rotate this screw counterclockwise until the chain stops. If this is not achieved, specialist assistance is needed. An unregulated chainsaw is a very dangerous thing.

A well and properly adjusted carburetor is:

Below is a of adjusting the carburetor chainsaw