Every year, gasoline engines are more and more displaced by electric motors installed on a new type of machine called electric vehicles. However, like internal combustion engines, electric powertrains can break, causing problems in the functioning of the vehicle. The bulk of the motor malfunctions occurs due to the strong wear of the mechanism parts and the aging of materials, which is supported by the improper operation of such a car. There can be many reasons for the appearance of typical malfunctions, and we will tell you about some (most common) ones.

Let’s look at the breakdowns of electric motors in more detail, identifying their possible causes.

Problem: when connected to the power supply, the electric motor does not develop the rated speed and makes unnatural sounds, and when the shaft is scrolled by hand, the operation is uneven. The reason for this behavior is most likely a break in two phases when connecting the stator windings with a triangle, or break when connecting with a star.

If the rotor of the engine does not rotate, it emits a strong hum and heats up above the permissible level, it can be stated with certainty that the stator phase is cut off. When the engine is buzzing (especially when trying to start), and the rotor rotates at least slowly, often the cause of the problem is a break in the rotor phase.

It happens that at rated load on the shaft, the electric motor works stably, but its rotation frequency is slightly lower than the rated one, and the current in one of the stator phases is increased. As a rule, this is a consequence of a phase failure when connecting the windings with a triangle. 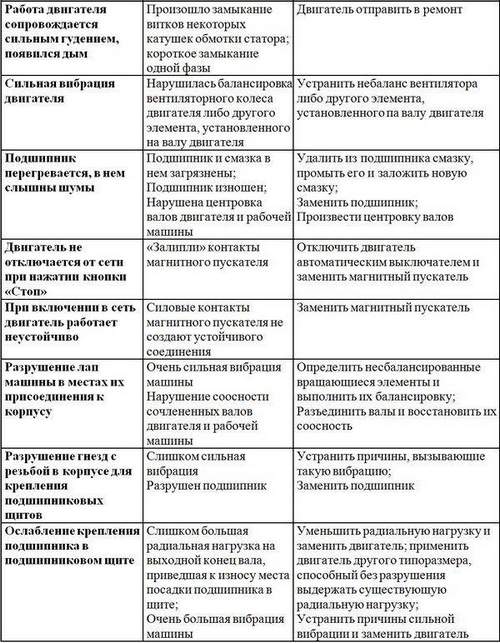 READ  How to Remove the Gear from a Screwdriver Motor

If the entire electric motor overheats evenly, the ventilation system fan is faulty, and the overheating of the sliding bearings with ring lubrication is due to the unilateral attraction of the rotors (due to excessive development of the liner) or poor fit of the shaft to the liner. When the rolling bearing overheats, making an abnormal noise, it is likely that the reason for this lies in the contamination of the lubricant, excessive wear of the rolling elements and tracks or inaccurate alignment of the shafts of the unit.

The knock in the sliding bearing and in the rolling bearing is due to serious wear of the liner or the destruction of the tracks and rolling elements, and increased vibration is a result of imbalance of the rotor due to interaction with pulleys and couplings, or the result of inaccurate alignment of the unit shafts and misalignment of the coupling halves.

A DC motor can also have its own characteristic malfunctions:

Under serious load, the machine’s anchor may not rotate, and if you try to deploy it with an external force, the engine will work “peddling”. Reasons: poor contact or complete open circuit excitation, interturn or short circuits inside the independent excitation winding. Under the conditions of nominal values ​​of the mains voltage and the excitation current, the rotation speed of the armature can be less or more than the established norm. In this case, the culprits of this situation are brushes shifted from a neutral position in the direction of rotation of the shaft or against it.

It may be that the brushes of one sign sparkle a bit more than the brushes of another sign. Perhaps, around the collector circumference, the distances between the rows of brushes are not the same, or there is an interturn circuit in the windings of one of the main or additional “pluses”. If blackening of the collector plates, which are located at a certain distance from each other, is also added to the sparking of the brushes, then the culprit of this situation is most likely a poor contact or short circuit in the armature winding. Also, do not forget about the possibility of a break in the armature coil attached to the blackened plates.

In cases where only every second or third plate of the collector darkens, the cause of the malfunction may be a weakened pressing of the collector or protruding micanite of insulating tracks. Brushes can spark even with normal heating of the motor and a fully functional brush unit, due to unacceptable wear on the collector.

If there is an increased sparking of the brushes on the collector, then it is worth checking the density of their fit, as well as conducting a diagnosis for defects in the working surface of the brushes. In addition, the reason may be the uneven pressure of the brushes or their jamming in the brush holder. Naturally, if any of these problems is detected, it must be correctly eliminated, but quite often only highly qualified specialists can do this.

READ  How Can You Cut Tiles At Home

High-quality overhaul of electric motors can be made only at specialized enterprises. During the ongoing repair work, the power unit is disassembled and the subsequent partial replacement of worn parts. Let’s look at the order in which all actions are performed using an example of an asynchronous electric motor.

At the initial stage, using a screw puller, remove the pulley or coupling half from the motor pulley. After that, you need to unscrew the bolts securing the fan casing and remove it. Further, using the same screw puller, you need to unscrew the locking screw and remove the fan itself. If necessary, the same tool can be removed from the motor shaft and bearings, and then, unscrewing the mounting bolts, dismantle their covers.

After that, unscrew the bolts securing the bearing shields and remove these shields with a light hammer blow through a wooden gasket. In order not to damage steel and windings, a cardboard gasket is placed in the air gap, onto which the rotor is lowered. The electric motor is assembled in the reverse order.

After the repair work has been completed (the specifics of the conduct depend on the nature of the breakdown), the motor should be tested. To do this, simply rotate the rotor, holding the pulley, and if the assembly is done correctly, the unit should rotate easily. If everything is fine, the engine is put in place, connected to the network and the operation is checked in idle mode, after which the motor is connected to the machine shaft and tested again. Let’s look at options for troubleshooting an electric motor using some typical failures as an example.

So, let’s imagine that the motor does not start due to a lack of voltage in the network, a circuit breaker or a blown fuse. The presence of voltage can be checked using a special device. An AC voltmeter having a scale of 500 V, or using a low-voltage indicator. You can fix the problem by replacing the blown fuses. Note! If at least one fuse blows, the engine will make a distinctive hum.

A break in the stator winding phase can be detected with a megohmmeter, but before that all ends of the motor windings should be freed. If a break is detected inside the winding phase, then the motor will have to be sent for professional repair. The acceptable norm for lowering the voltage at the motor terminals when starting it is considered to be an indicator of 30% of the nominal value, which is caused by losses in the network, insufficient transformer capacity or its overload.

If you notice a decrease in voltage at the terminals of the electric motor, it is necessary to replace the supply transformer or increase the cross-section of the wires of the supply mowing line. The absence of a power supply contact in one of the stator windings (phase failure) causes an increase in current in the element windings and a decrease in the number of revolutions. If you leave the engine to work on two windings, then it simply burns out.

READ  Brush screwdriver or brushless motor which is better

In addition to the listed electrical problems, electric motors can also suffer from mechanical failures. So, the cause of excessive heating of the bearings is often the incorrect assembly of these parts, poor alignment of the motor, dirty bearings or too much wear on the balls and rollers.

In any case, before proceeding with direct actions, a complete diagnosis of the electric motor and the parts interacting with it should be carried out. The inspection procedure begins with a battery check., and if it is in good condition, then the next step is to check the power supply to the controller wiring diagram (ECU, which controls the rotation speed of the electric motor). It is possible that on a segment of the path from the battery to the board, you will find a wire break. Breakdown of the electronic board is an infrequent phenomenon, but if there is even the slightest doubt about its serviceability, it is better to immediately visually assess the condition of the part. If there was a strong heating of the board elements, you will immediately find blackened and swollen areas with possible smudges.

In the event that the car owner has at least minimal knowledge in the field of electronics, he can independently check fuses, semiconductor components (such as diodes and transistors), all contacts, capacities and the quality of soldering.

When the ECU output has an operating voltage in the on state, it is usually worth looking for the cause of the malfunction in the motor itself. The complexity of the repair of the unit depends on the specific malfunction and type of mechanism. So, When examining AC electric motors with rotary power, first of all, it is necessary to check the contact brushes, after all, they are most often the cause of breakdowns of engines of this type. After this, the windings should be checked for an open or short circuit. In the event of a break, the tester will not show any resistance value, and in case of a short circuit, the resistance indicator will correspond to zero or Ohm unit.

Having found a malfunction, it, of course, needs to be eliminated. This can be done either by repair and replacement of failed parts (for example, brushes), or by replacing the entire motor with a working analog.