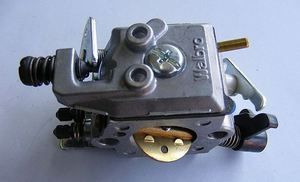 A chainsaw is an indispensable tool in a private home. Therefore, its smooth operation is very important. The quality work of the chainsaw to a large extent depends on how effectively the carburetor performs its functions. Let’s try to figure out how to adjust the carburetor on the chainsaw yourself.

Design and principle of operation of the chainsaw carburetor

As with any other mechanism, before you do something, you need to understand its structure and principle of operation. So, the carburetor is the part of the engine designed for mixing in certain proportions of oxygen and fuel, and supplying this mixture to the engine. Violation of proportions leads to poor engine performance or to excessive consumption of fuel, or to a complete stop.

The carburetor device, in general, is the same in all saws, with the exception of Chinese-made chainsaws. But, in principle, it will not be superfluous to look into the instrument data sheet and study the structure of the carburetor. Its main components are as follows:

In carburetor operation mode, air passes into the tube and goes through it at a speed controlled by a damper. Opening the tube activates the float. Air flow passing through a diffuser, mixes with fuel and sprayed. The resulting mixture enters the cylinder through the inlet. The pressure in the chamber with the float is close to atmospheric, and the pressure in the tube for air is rarefied. This difference in pressure is needed to draw fuel into the tube. The more fuel is supplied, the greater the engine speed. This is the general structure and principle of operation of the chainsaw carburetor.

Signs of the need for carb adjustment

There are several signs that the carburetor is not working properly and needs to be adjusted.

If you have some of the above signs, then it’s time to adjust the chainsaw carburetor.

READ  Which Is Better Than A Chainsaw Or A Saw Compare

It is also possible that there will be fewer screws in your chainsaw, depending on the manufacturer.

So, we found out the designation of the screws, we proceed to the preparatory procedures. Everything is simple here.

Now you can proceed directly to the adjustment itself, which is carried out in two stages.

In principle, setting up the carburetor of chainsaws is quite simple if you have experience or related skills. The first thing to do is slow motion tighten the screws clockwise, marked L and H all the way. And then turn them back one and a half turns. All this is done with the engine turned off.

After completing the procedure, start the engine and warm it up for 10 minutes, setting it at medium speed. Now we will deal with the idle screw, which, as we recall, can be designated in different ways. Its necessary twist counterclockwise, until the motor starts to run evenly. Watch that the chain moves or does not move. If yes, then the screw must also be turned counterclockwise. If the engine stalls in this mode, turn the screw a little clockwise.

READ  How To Rivet A Chainsaw Chain At Home

Upon completion of all manipulations, be sure to check: acceleration, idle speed and speed.

Checking the operation of the chainsaw after adjusting the carburetor

If you have correctly adjusted the carburetor on the chainsaw, the following tests will show. Gently press the accelerator and, if the engine speed almost immediately increased to maximum, then it works fine during acceleration. The maximum values ​​are from 2800 to 15000. If this does not happen, turn the screw L one eighth of a turn counterclockwise.

The maximum number of rotations of the motor per minute should be between 11500. 15000. If the speed exceeds these values, the ignition process will be disrupted. Therefore, we check how the ignition occurs, if there are malfunctions, turn screw H counterclockwise, thereby reducing the number of revolutions per minute.

After these tests, you need to check the operation of the chainsaw in idle mode. We can talk about the correct adjustment of the idle screw if the circuit does not move during the test, and when the engine is pressed by the accelerator, it quickly picks up the maximum number of revolutions. The sound of the motor should fall in four cycles.

If during the inspection you understand that the necessary conditions have not been achieved, the adjustment must be carried out again or consult a specialist.