Lawn mowing is a mobile high-performance tool for the refinement of household plots and surrounding areas. During long-term operation due to wear of parts or production defects, malfunctions arise that lead to the fact that the trimmer stalls or does not start. Since this tool is a rather complicated mechanism, there can be several reasons why the lawn mower stalls. 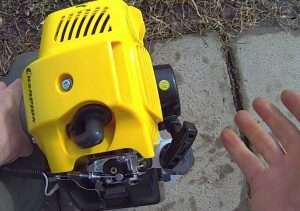 Why does the trimmer stall

There are two main ways to solve problems: transferring the braid to a specialized center or do it yourself. The first option is suitable for those who are ready to pay a “tidy” amount to restore the unit’s performance, and the second is for someone who has basic locksmithing skills and can independently understand the causes of breakdowns and how to fix them.

Currently, it is customary to classify breakdowns by which the lawn mowers stall into the following categories:

The mowing stalls when you press the gas

With a similar problem, it is worth paying attention to the fuel valve, which, when clogged, ceases to normally allow the fuel mixture to pass through. The solution to this malfunction is to attenuate it with a suitable tool. In addition, the problem with the circulation of the fuel mixture may lie in the contamination of the valve. To do this, just blow it with a stream of compressed air.

During operation, a situation arises when, when you press the fuel mixture supply key, the unit speed does not increase but decrease. A malfunction of this nature may be caused by:

When air leaks during the operation of the internal combustion engine, it is necessary to check the tightness of the pipe connection and the integrity of the gaskets in the CPG. The problem with the circulation of the fuel mixture can be solved by eliminating blockages in the fuel pipes leading to the carburetor. If there is a vacuum in the tank and the fuel mixture does not enter the carburetor, it is enough to clean the breather with a thin needle and blow it with air.

Often when the speed is reduced, the lawn mowing engine stalls and does not support idle when restarted. The main reasons for the occurrence of such a breakdown include pollution or deregulation of the carburetor, as well as clogging of the air filter.

If the carburetor is not optimally tuned, it must be cleaned and re-adjusted. The clogging of the trimmer’s air filter can be dealt with by placing it for several hours in a solution with ordinary household detergent. If self-cleaning did not help to cope with clogging, then it is better to purchase a new filter element in accordance with the instruction manual.

After the events, the user for a long time will not encounter a situation where the trimmer stalls at idle and only functions when gas is supplied.