How to Charge a Screwdriver Battery Properly

Despite the fact that nickel-cadmium batteries have been banned from production in the EU countries since this year, these tireless workers are still used in many inexpensive and powerful stand-alone devices (screwdrivers, electric shavers, lights). 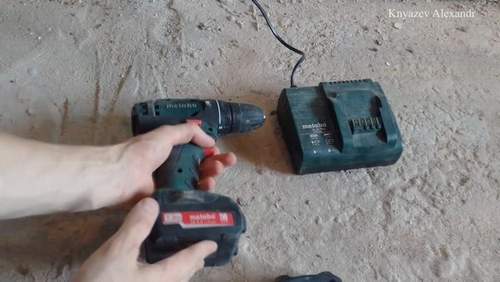 Even if nothing is said about the type of battery of the device in the instruction manual, it is quite simple to determine that the nickel-cadmium battery is the current source. Most often the charging time is indicated in the range of 5-12 hours and there is an indication of the need to disconnect the charger independently after charge time.

For nickel-cadmium batteries, fast pulsed charging is preferable than slow direct current. These batteries can produce more power, which determines their choice for powerful stand-alone devices. Nickel-cadmium batteries are the only type of battery that can withstand full discharge under heavy load without any consequences. Other types of batteries require incomplete discharge at relatively low power loads.

Nickel-cadmium batteries do not like prolonged charging with occasional light load. Periodic complete discharge is necessary for them as air for a person. In the absence of a complete discharge, large metal crystals form on the electrodes (which leads to the manifestation of the so-called memory effect). The battery suddenly loses its capacity. Long and efficient operation of NiCd batteries requires battery maintenance cycles. Full discharge followed by a full charge, based on most recommendations. Once a month, in extreme cases, once every 2-3 months.

Nickel-cadmium batteries are the most “foolproof” of modern mass batteries. To use them, you do not even need a battery monitoring system, which determines their use in inexpensive and powerful devices.

Charging with small currents for 5-12 hours allows you to do without any precautions in the form of charge-discharge control systems. When recharging, the battery will simply slowly lose capacity (to the joy of the manufacturer). You need to keep this in mind when using “bad-boy” chargers (chargers without automatic charge control). Therefore, it is best to charge a fully discharged battery and strictly observe the charging time, which will save the NiCd battery capacity for a sufficiently long time.

See also  How to Fill a Fishing Line into a Reel

As an illustration of the need for a temperature sensor in the charger, I can give an example of the two-year-old charge of a nickel-cadmium battery for a professional screwdriver on a charger without a temperature sensor (in the photo, this is the charger itself), which allows you to charge the battery at an accelerated pace. In an hour. At that time there was a temperature in the apartment of about 30 ° C, the charger should automatically charge the battery until the target voltage is reached and turn off automatically, which was said in English in white in the instructions in the safety section. In the morning, the first battery from the kit was charged without any incidents. After 50 minutes the charger turned off, and in the late afternoon, the second battery brought a surprise when charging: due to the lack of a temperature sensor in the charger, the battery entered thermal dispersal mode. Since the charge was accelerated, the problem was noticed late. When the battery went smoke and began to spray hot electrolyte. Quickly disconnected from the network, the charger was saved. The battery, for a long time, sniffed in agony, trying to do as much harm as possible when leaving the other world, but it did not succeed and the damage was limited to the cost of the battery itself. 15usd. Since then, the charger is connected to the network through a timer.

Table for a slow (trickle) charge of typical elements

The data in the table are relevant for fully discharged batteries.

Do you know what?

Work with Ni Cd batteries for a screwdriver

I bought a new screwdriver and decided to better understand how to properly operate its nickel-cadmium batteries.
Goal. Active work with a screwdriver with a change of batteries (battery) without risk of ruining the batteries ahead of time.
Reference:This screwdriver has:- Accumulator battery. 12v- Amount of elements. 10.- Battery capacity. 1.2 hours.- EMF charged battery. 13.6v.Features:- It is believed that the maximum emf of a fully discharged battery. 10b.- All Ni Cd batteries have a memory effect, i.E. If they are not discharged to the end, then they lose their capacity.- Ni Cd batteries have a large self-discharge.- The number of charge-discharge cycles for any battery is limited.- It is believed that the only criterion for the full charge of Ni Cd batteries (at currents greater than 0.1 ° C) is their temperature equal to about 40 ° C.
What I’ve done:1. First, I studied the mat. Part (file attached).2. Secondly, he conducted a series of measurements.3. Thirdly, he worked and made a charge-discharge device for ultra-fast charge and automatic shutdown at rated discharge.So, on points:

1. Read the theory (file).2. I measured charging currents and battery temperatures at two very different currents and compared them with theory. # 8203;

2a. Fast charge with a large initial current (greater than 2.5 Amperes).I charged the fully discharged battery with a 15 volt EMF charger taken from an old laptop without additional current / voltage limiters, i.E. Directly. Actually, this is called a constant voltage charge.Result:In the first 15 minutes, the battery took 50% of its capacity, while the charging current dropped to 1.4a. The temperature of the battery did not change much.Then, over the next 45 minutes, the current asymptotically approached 0.22a (the temperature of the battery increased to 30C). Then, for almost 1 hour, the current remained at the level of 0.22a (at the end. 34c) and after another 30 minutes I turned off the charge with a pronounced automatic equalization of the charge of the elements (in accordance with the theory). With increasing current to 0.35a and temperature to 38C.Conclusion: a full charge with high current can be produced in 2.5 hours. And up to 50%. In 15 minutes. I never read about problems with undercharging. Problems only. With undertime beside. Well, of course. With penbehind nearby (or rather. With overheating due to overcharging).2b. Slow charge with a small current (0.1c, i.E. 120ma). Mode. Close to drip.I charged the fully discharged battery with a charger from another screwdriver (less powerful than the standard one) without additional current / voltage limiters, i.E. Also directly.For the first 15 minutes, the charging current dropped from 310mA to 120mA and then remained more or less stable, and the temperature rose to 37C for 15 hours of charge.At the same time, the temperature at 36-37С stabilized after 10.5 hours of charge.Conclusion: A charge close to the current, but not more than 0.1 ° C, can be carried out without time limitation, i.E. Do not be afraid of overheating / overcharging the battery. Roughly speaking. I turned it on for the night and then when I woke up, scratched it and turned it off. This is useful if the battery does not have a disconnecting thermocouple.

3. From the charging unit from an old screwdriver, I made a charge-discharge device (ZRU). # 8203;

See also  Which Brand Screwdriver Is Better For Home

Well, the charge is there. Directly from any of the two chargers described above, and discharge. Through a powerful resistor (24 Ohm) with a circuit on the relay. Relay. Automatically disables the discharge when the voltage reaches 9-10 volts.Why forced discharge? It is needed so that the battery capacity does not decrease, i.E. To eliminate the effect of memory (see theory in the file). Those. When the user believes that the battery should be changed, he inserts the semi-discharged battery in the switchgear into discharge mode and, doing his job, waits for the LED to turn off. After that, it switches the toggle switch to the charge position and, if this battery has a thermocouple disconnecting the charge when the temperature rises to 40-45C. Forgets about him. Over, it can use a rechargeable battery in 15 minutes (with a fast charge). If there is no thermocouple, then a daily electro-mechanical timer can be used to turn off.

Note 1 In principle, you can discharge the battery with the screwdriver itself, but I did not like it. The control of the level of the nominal discharge is approximately the following: if the cartridge that is barely rotating without load is stopped by hand and after that it itself will not start to rotate, then. The discharge is close in nominal.
Note 2 At any real charge current, the end of charge of Ni Cd batteries can and should be judged by the temperature of the battery. Better about 40C (at room ambient temperature!).
Note 3 Based on the foregoing, recommendations can be made on the storage of batteries. The purpose of the recommendations. Maximum battery life.I would single out two different operating modes for a screwdriver:- Seldom. Let one battery lie in the state that remained after the last operation, and another. Keep discharged. When starting work, first use (untiltime in the process), and the second at this time can be charged.- Often. Store one. In a charged state, and the other. In whatever remains after the last job. Well, what if. Very often (every day), then both can be stored in a charged state. I understand that not everyone has a charger for a fast charge, as well as for a slow charge (regular ones usually give an average current between them). However, nevertheless, they are not difficult to make / find. In any case, I hope that what is written here will help someone to figure out a little with such peculiar Ni Cd batteries.