How To Cut The Outside Corner Of Skirting Board Ceiling

Trimming the corner of the skirting board for the ceiling

Any construction work sooner or later passes into the stage of finishing or decorative. If it comes to walls, then they resort, in most cases, to pasting them with wallpaper, the ceiling can be painted, made stretched, or suspended again with wallpaper. But as for the joints between the wall and the ceiling. They also need finishing, because they often look impartial. At this particular moment, when both the walls and the ceiling are already finished, it is important to choose a fillet that will beautifully cover the joint. In its capacity, it is customary to use a ceiling plinth, which decorates both the ceiling and the upper part of the wall. How to glue an even plinth, usually no one has any questions, but not everyone knows how to cut the corner of the ceiling plinth correctly. 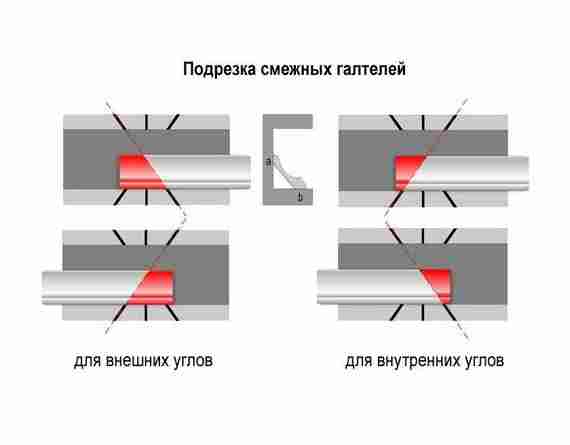 To cut the outer corners of the skirting board into fillets, use 45 degree slots

Ceiling skirting boards are widely used today. It is made of lightweight, harmless to human health, polystyrene, which is easily mounted to the ceiling or wall. In addition to the fact that this building material is convenient to use and environmentally friendly, it is also very inexpensive.

Before gluing, be sure to try on the skirting board to check the accuracy of joining the corners.

To begin with, we take a part of the skirting board, which will be used as the right side of the corner, and apply it to the joint in close contact with the corner and mark the line on the ceiling along which the skirting board adjoins it. We put this part down, and try on the second plank of the created corner (left), which we again apply to the joint and mark out the line on the left side, as we did on the right. The crossed out mowing lines must intersect and the crossing point must be moved one by one to the right and then to the left corner plinth. On one of them, for example, on the left, we cut off the angle that is formed between three points. two corners directly on the plinth and the intersection transferred from the ceiling of the mowing line. And on the second, right, we cut off a similar corner, but we do it by slightly tilting it, so that the back of the material remains intact. Now you can attach the parts to the joint and, if there are no flaws, gaps, for example, hang them on glue. If there are still defects, they need to be corrected somewhat by slightly cutting or leveling the butt sides of the skirting boards that are combined in the corner.

See also  How to cut corners on plastic corners

Finishing the outer corner of the room, you need to alternately mark out the outer edges of the applied plank on the ceiling, mark the intersection point and transfer it to each plinth. Cut the corners again in different ways. The left one is approximately 45 degrees so that the cut runs parallel to both the front and the back of the skirting board. And we cut off the right part of the joint being created, leaving the whole front wall of the skirting board intact. Again, before putting the cut out parts on the glue, it is recommended to try on dry parts of the ceiling trim in order to be able to fix something.

To cut out the inner corners, the plinth must be inserted into the miter box, press its edge a little further than the slot along the right 45-degree mark and cut off with a hacksaw blade.

See also  How to sharpen a hacksaw at home

The only concern that a person who begins to install a ceiling plinth may face is cutting and cutting out the corner joints of the plinth on the ceiling. The problem lies in the fact that the joint of the corners of the baseboard should be measured approximately by eye, since the ceiling fillet is attached to the surface at an angle of 38-45 degrees in relation to the base. In this regard, at the junction, a 45-degree cut will be very problematic.

There are several ways to successfully cope with the task. For example, use the tool of locksmiths in your work. a construction miter box. Its function, after all, is to cut corners at an angle.

In order to properly cut the inner corner, you will need to cut each of the butt elements in turn at an angle of 45 degrees.

The ceiling plinth is inserted into the miter box, and its longest part should be on the left. The corner is clipped at the left 45 degree mark. The right part of the corner must be cut off in the same way as the left.

But, if the first one is usually cut, then the adjoining one is performed in an absolutely mirror technique. The outer corner is done in a similar way. The only difference is that the cut is performed “inside out”. This is how this process looks simple. All that remains is to glue the strips to the place provided for them. However, it’s too early to rejoice, since this option for cutting corners is suitable only in those rooms where the wall, ceilings and floors are strictly perpendicular to each other, that is, there is an angle of 45 degrees between the joint wall and the ceiling. Only a rare room has such evenness.

See also  How to cut a ceiling plinth under 45

You can successfully and correctly cope with the task and cut the corners of the ceiling plinth using even simpler tools than a miter box. To make a fillet with our own hands, we need:

The miter box is a tray with slots at a certain angle. To cut plastic skirting boards, it is enough to use a miter box with angles of 45 and 90 degrees.

At the same time, the clerical knife must be very sharp, because the porous, but at the same time, rigid and durable structure of the ceiling plinth is difficult to cut. And if you make a cut using a dull blade, it will turn out to be uneven. That, subsequently, will affect the inability to dock it correctly with the adjoining part. In case you do not have a clerical knife or it is out of order, you can replace it with a well-sharpened kitchen knife. As for conventional gear saws, they are not recommended for working with polystyrene, as they can damage the appearance of the finishing material.

Features of working with a ceiling plinth

The work of gluing the ceiling plinth, especially if you need to do it yourself and correctly, will be very long and exhausting. It requires tremendous perseverance and attention, so if you do not have the desire to sit on your own for an hour over every corner of the room being trimmed, then it is better to seek help from professionals. If, after you have already glued everything, you suddenly notice a small gap at the joint, do not be sad. Since it can be masked with grout in the same color as your material.