How to Replace Brushes with an Angle Grinder

Angle grinders in Soviet times were made in Bulgaria. Therefore, angle grinder began to be called an angle grinder. Currently there are many companies producing angle grinders of various models. But the basic elements are the same. Having familiarized yourself with the device, possible breakdowns and tool diagnostics, you can repair the angle grinder of any modification with your own hands.

The device and purpose of the angle grinder

Angle grinder is designed for grinding and cutting various materials.

The main elements of the angle grinder

The angle grinder consists of the following elements:

A wide selection of bearing products is offered by the Thermopolis company. https://termopolis.com.Ua/

Main malfunctions, their causes and diagnostics

The main breakdowns and causes:

How to disassemble and reassemble the angle grinder

To troubleshoot the angle grinder must be disassembled.

Remove the nut that holds the working disk.

Turn off bolts of fastening of a protective casing.

Remove the top of the rear housing. Turn off bolts of fastening of a cord. Remove the wires and button from your grooves. In some models, for example, in DWT, the rear case is not disassembled into parts, but is removed entirely.

Remove the gearbox bolts located around the casing mount.

To disconnect the anchor from the aluminum housing, unscrew the nut located in the gear housing.

Reassemble the tool in the reverse order.

The clamping nut is not untwisted

During operation, the disk can tighten so tightly with a nut that it begins to crumble. It is not possible to unscrew the nut with a wrench. And you do not need to do this, since you can break the angle grinder. First, break the disc all the way to the nut. Then find the metal plate a little thinner than the working disk. Use it to drain off the rest of the disc under the nut. It can be easily unscrewed with a key or hands. In order not to bring the tool to this problem, put the washer under the nut.

How to remove a tightened nut

The casing cannot be removed

In some grinders, for example, Bosh, the casing is not bolted, but latched. To remove it, you need to turn the cutout of the casing perpendicular to the angle grinder. To dress, turn until it clicks.

The stator is checked with a multimeter.

First visually inspect the collector and winding. There may be visible damage: black marks, bent turns of the winding, raised, worn or burnt collector plates. After inspection, proceed with the tester.

The determination of the breakdown to mass is done in the absence of a winding break. Put the maximum resistance on the scale of the device. Depending on the tester, it can be from 2 MΩ to 200 MΩ. Connect one probe to the shaft, and the other to each plate in turn. In the absence of faults, the resistance should be zero. Do the same with the rotor. Connect one probe to the iron body of the rotor, and move the other along the plates.

Put the tester in dialing mode.

Insert one probe into the output of the button and the other into the opposite input.

Click the button. A sound signal indicates the health of this part of the button.

Do the same with the other input and output of the button.

How to ring the start button

Connect one probe to the plug pin, the other to the button inputs. In one of two positions there should be a sound signal. Do the same with the other pin of the plug.

If the power button and power cord are working but the engine does not turn on, check the softstart control board. Remove the screw that secures the control board. Remove it carefully. Call all items. If there is a speed regulator in the angle grinder, then it can be connected in series with the power button and have one board with soft start. But may have a separate fee. It is checked similarly to soft start.

If you are unsure of your abilities, it is better to take the tool to the workshop.

Damaged cord and button must be replaced. On the button, unscrew the bolts securing the incoming and outgoing wires. Disconnect it from the chain and install a new one.

If only the triac is out of order in the control board, then a new one must be put in its place. Pre-grease the metal part of the element with thermal grease. If other elements of the board burn out, replace it completely.

Brushes must be checked periodically. When one is worn by 40%, change both. And also clean the brush holders. 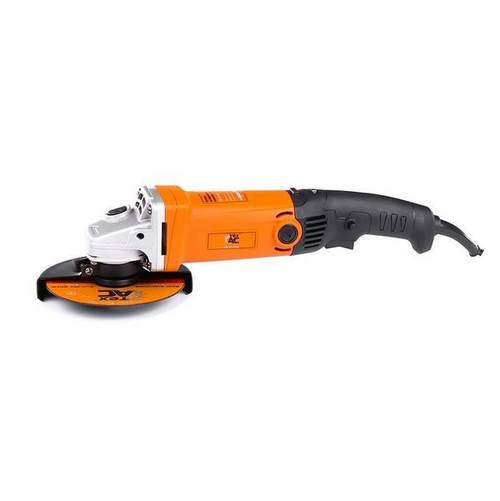 For high-quality winding coils, you will need an enamel wire and an electric cardboard.

Remove the winding and old insulation from the housing. Look carefully at the slots. When the coils burn, insulation is burned and a short to the case occurs. Deposits remain on it, which must be removed with a file or a diamond bur. Deposits will interfere with the new winding. She may tear.

The winding is saturated with varnish. To disconnect the wires and count them, you need to strip out the insulation. Preheat the winding with an industrial hairdryer or any burner.

Burn matches or lighters with any fire to make the enamel completely burnt out. Take a micrometer and measure the thickness. Record wire diameter and number of turns.

Take any wire and make a loop out of it so that it fits in the grooves of the stator. Under the diameter of this loop, select a cylinder for winding coils. For example, spray can. If its diameter is not enough, then wrap the can with paper.

Wrap both windings from the enamel wire. Fasten the frontal parts with glass tape or thick thread. The thread should not break and melt. At the loose ends, put on shrink cambric.

Make sleeves from the electric cardboard and insert them into the grooves. Place the windings in them.

Check the resistance in the windings of the tester. If everything is fine, continue.

So that during operation the wires do not vibrate and do not rub against each other, they must be impregnated with any oil-based varnish. Put the starter preheated in the oven vertically and squeeze the varnish onto the winding with a syringe. When the varnish starts to leak from below, turn the stator over and soak on the other side.

When the varnish is dry, proceed to connect the windings. Connect the two ends of the different windings to each other and connect to the nearest brush. Connect the other two connected ends to the start button. Connect the wire from the second brush to the button.

If the balance is disturbed, the anchor must be replaced. The winding and collector are subject to repair. Small short circuits are eliminated. If a significant part of the winding is damaged, it can be rewound.

A not very developed collector is corrected by a groove. But if the plates are erased to a plastic base or partially burnt out, then the restoration is carried out by soldering or galvanic building.

If the collector was completely worn out, then after soldering it will be enough for no more than a month of active use. And not completely damaged plates after such a repair can withstand several brush changes and do not evaporate. You will need to cut the copper plates in size and solder them with a lot of solder. Strain excessively with a file and polish.

With galvanic build-up, reduced copper is very solid. The life of the collector is like new.

By galvanic build-up, it is possible to restore both a completely wiped collector and partially damaged plates. The restored collector must be grooved and the plates divided with a drill or hacksaw blade.

In order to rewind the anchor correctly, you need to correctly disassemble it and remove the parameters for the template:

For example, 80 conductors in a groove, 12 lamellas and 24 grooves. 12 sections of 2 coils. The winding passes in two circles, so we divide 80 conductors in the groove by 2, and another 2, since there are 2 coils. We get 20 turns of one coil.

See also  How to Check the Serviceability of Anchors Angle Grinder

How to remove the old and rewind a new winding:

Use a hacksaw or wire cutter to remove the frontal parts of the winding.

Carefully, without damaging the slot insulators, knock out the rods of the remaining parts of the winding with a hammer and a metal chisel.

Use a file to remove any remaining impregnation. Count the conductors in the groove and measure the diameter of the wire. Draw a diagram. Cut the insulation sleeves from the cardboard and insert them into the grooves.

After winding, weld the conclusions of the sections with the collector plates. Check the winding with a tester.

Soak the winding with epoxy.

Bearings crumble or jam over time. They need to be changed.

The gearbox must be disassembled not only for repair, but also for preventive cleaning and lubrication.

Remove the bolts and disassemble the gear housing. You will see dirty grease that needs to be removed.

Old grease will spill out of it. Clean parts with a rag or toilet paper. Flush the housing and parts with kerosene.

Apply new grease recommended by the manufacturer in the tool manual.

If the button has flown out, then such an angle grinder cannot be operated.

Since the spindle can spontaneously lower to the gear and block it during operation.

The locking unit consists of a spindle with a rubber ring, a spring and a plastic button.

Care and proper operation of the angle grinder

For the angle grinder to work for a long time, follow the rules:

Watch integrity of isolation of a wire, plug. Do not remove protection.

Lubricate and clean the entire tool.

After turning off the angle grinder, wait until the rotation of the circle stops, then lay it on the ground. When the engine stops, the tool through the ventilation holes sucks together with the air stream particles of earth and other hard fractions that hit the motor windings. As a result, an open or short circuit occurs.

If you actively use shlifmashinay corner, then you are a good master. It’s not difficult for you to understand the device’s device and repair it with your own hands. First, find the fault and determine which nodes should be checked. Repair the angle grinder carefully, without haste, so that a minor breakdown does not turn into a major one.