How To Start A Stihl Saw Video 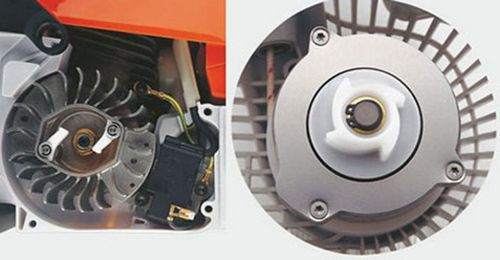 The fact is that it is necessary to take care of a successful start after downtime and properly prepare the saw for storage. According to the manufacturer’s instructions, before storing, it is necessary to drain the fuel from the tank, then start the engine and burn off the fuel in the fuel system.

Preparation is necessary so that during storage, the carburetor membranes do not stick together. Performing this simple operation will allow you to successfully start the saw after long-term storage.

It is much easier to start the chainsaw six months after idle time, if just before starting, through the spark plug hole, add 1. 2 ml of the fuel mixture to the cylinder. This can be done with a syringe.

What happens when the primer is pumping fuel, and how does it help to start the saw more efficiently?

At the moment of starting the saw without a primer, several movements of the starter are carried out only so that the fuel pump, under the action of an impulse from the saw crankcase, pumps fuel into the carburetor.

The pump installed in the fuel line allows you to manually pump gasoline into the carburetor without unnecessary movements with the starter. The effect of this action is obvious, the saw will start much faster.

There is no need to use a primer on a hot chainsaw, since there is enough fuel in the carburetor to start.

How to start the saw “Stihl”?

Working with a chainsaw begins directly with starting it. And it is at this stage that the most common problem often arises: the launch does not take place. Puzzling over how to start a Stihl saw, many run to the nearest workshops and talk about its breakdown. And if the saw is new, then they generally try to return it back to the seller. In fact, the reason is not in the saw malfunction, but only in its features, which should be taken into account when starting.

If the saw is new, then you should not throw its instructions too far, because it describes important and main actions that cannot be neglected. You can also find other tips there. For example, how to sharpen a saw correctly. The saw must be prepared before starting. To do this, special protection is removed from the tire, and oil for the chain and gasoline for the engine are poured into special tanks, which is diluted with two-stroke oil into a kind of gasoline mixture. It is also important to set the chain tension.

On the recommendation of specialists or the same instructions, starting the chainsaw begins with activating the chain brake. Some models are equipped with a decompression valve, therefore it is recommended to press it in order to quickly start the engine of the chainsaw. The same actions are recommended to be done with the fuel pump, pressing which will significantly reduce the number of pumping. When it comes to how to sharpen the saw correctly, then it should be in a neutral state, and all the actions described should not be applied to it.

Now the combination lever is set to the cold start state, that is, first you need to activate the throttle lever, and then press the combination lever itself all the way down. When starting, the saw should be placed on a level surface, preferably a hard floor, and the saw blade should not be in contact with the surface. The stability of the chainsaw is ensured by gripping the main handle with the left hand, and with the foot. The lowest one. Before choosing a reciprocating saw, it is important that it is equipped with additional handles to ensure safety and ease of use.

Then slowly pull the starter rope with your free hand. When resistance is felt, the cable is pulled sharply up several times. At this time, the engine starts, but turns off quickly. This does not mean that it is already time to think about how to repair the saw. You just need to move the combined lever to the half-throttle position, that is, one position. The engine is now started using the starter rope. The lever immediately moves to its original position, and a finger briefly presses the throttle lever. Now the chainsaw can be slowly raised and started to use carefully, be sure to observe all safety measures.

How to start a Stihl chainsaw (Stihl MS-180). The first start and start without a starter

Chainsaws differ slightly in design features, but in most cases the assembly principle is carried out according to two standard schemes. For many devices, the instructions contain information about the need to activate the emergency brake before starting the activation procedure. You should first master the device of the plant and study the main ways of correcting breakdowns, then a person will have the opportunity to fully operate the device. The article will talk about how to start a chainsaw.

Scheme of a standard mechanism

The saw in question can be considered a compact option, because its weight is only 3.9 kg. At the same time, it has a large oil and fuel tank. The device helps to perform its working functions by a two-stroke engine, the power of which is sufficient for solving simple tasks. In addition to this, during operation, this instrument does not generate strong noise, the level of which does not exceed 98 dB. For ease of understanding, it suffices to say that human speech creates noise at the level of 76 dB.