After removing the spool from the spool body, we determine the number of strands for winding the line (1 or 2).

There is no fundamental difference between bobbins with one and two grooves, but if carelessly threading into the paired groove, there will be operational problems.

Due to the likelihood of interlacing adjacent lines of the tool, a situation may arise when, after wear of the working antennae, it is impossible to remove new ones.

Regardless of the number of streams, a fishing line with a length of 1.5 to 3 meters is taken for refueling. Winding must be done in the opposite direction to the rotation of the head, since winding in the direction of travel will lead to the fact that the line will not be removed from the reel.

After the fishing line is tucked into the trimmer coil, thread the free ends (15-30 cm) into special holes. Next, we assemble the head in the reverse order of disassembly and check the performance.

Do not worry if the ends of the two antennae are very different in size, because when you start the trimmer, the knife installed on the protection will cut off the excess.

On small, bottom motor electric trimmers (when operating near the ground), the reel usually has two buttons on the sides.

Click on them and disconnect one half of the coil body from the second, which remains on the trimmer. Together with the first half, the inner part is also taken out, on which the fishing line is directly wound.

When parsing, be careful: there is a spring inside that can fly out and get lost.

On electric and gasoline trimmers with a straight bar and a gearbox at its end (on such trimmers, in addition to fishing line, you can also install a knife), we look for a hole under the coil, insert, for example, a screwdriver into it, gently rotate the coil until the screwdriver crawls even deeper, and the coil will lock.

READ  Which Trimmer Is Better: Electric Or Petrol

Now we turn the whole coil clockwise (since the thread is left-handed) and remove it from the trimmer. Then we disassemble the coil. It can be assembled using latches or twisted with a lamb.

If the coil is on snaps, then press on the sides on the base of the snaps so that they bend and release one half of the coil body from the other. We just unscrew the lamb.

There may also be a third type of connection of two halves of such a coil: with it, you need to grab the lower part with one hand, and the upper part with the other, and start turning them in opposite directions. When disassembling such a coil, you also need to make sure that the spring inside is not lost.

Trimmer users, both gasoline and electric, sometimes have cord problems.

“Advanced” mower owners easily cope with the difficulties that have arisen, understanding why this is happening, and for beginners it is a problem that has no rational explanation.

But in fact, everything is solved quite simply. The most common problems that happen with the line are as follows.

The video shows in detail how to wind the line on a trimmer reel or lawn mowers. Refueling with mowing line.

What types of woods are there

The most common type of line that fits almost all reel types is round cord. This is an ordinary fishing line, suitable for mowing succulent grass, but it will be much more difficult to mow dead wood with it, and even more so it will not cope with shrubs.

As a rule, the diameter that can be used to cut young grass does not exceed 1.6 mm. The thicker the thread, the more coarse grass it can overcome.

There are fishing lines with sharp edges in the form of an asterisk or a square, this option is more adapted to mowing dry grass precisely due to the existing sharp edges, but its disadvantage is greater wear and tear and it is inferior in strength to a round cord.

There are fishing lines with improved aerodynamics with characteristic dents, scales and notches, such a product makes less noise, but it is used only on lawn mowers, since the exit of such a thread from the reel is difficult, it is used most often with discs into which segments are inserted. The disadvantage of such a product is its fragility.

READ  How To Remove The Trimmer Head

How to properly wind the line in the trimmer, and what to do if the line is quickly consumed, breaks off 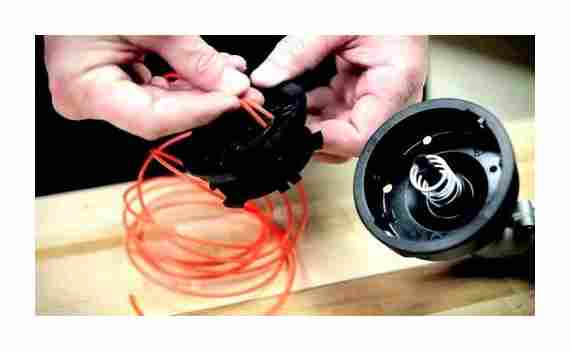 The trimmer is the most common machine used for cutting grass and small bushes. This device is distinguished by its simplicity in maintenance, simple operation during operation, and due to its low weight, even women can handle it.

It is no secret that for high-quality performance of work on mowing grass, the correct selection of cutting tools is required. As the latter, special cutting attachments (discs, knives) or trim heads with a fishing line inside are used in trimmers.

Nozzles and line are consumable tools, but if the knives can be sharpened, then when the line is used up, it must be replaced. In this article, we will tell you in as much detail as possible how to properly replace the fishing line.

How to Load Line into the Trimmer Reel

How to fill the line in the trimmer spool and which is best for this use?

Very often, those people who personally own cottages and gardens are faced with the need to take care of the lawn on this site. In such cases, you simply cannot do without a conventional braid or trimmer.

The former is slowly disappearing into the background and the people who use it are getting smaller. The trimmer works automatically and does not require much effort.

over, there is no special skill to use it.

How the trimmer works?

The principle of operation of such a device is that the grass is cut with a special line mounted on a rapidly rotating head. The number of revolutions per minute can reach 8000. Within a short time, the line becomes useless or, rather, wears out. Then the gardeners have a question: “How to fill the line in the trimmer spool”?

How to wind the line on the trimmer correctly

A garden trimmer is a useful tool that makes life much easier for any gardener or private home owner. The grass just rushes in the summer, especially after the rains, so you can’t go anywhere without it. But over time, sooner or later, the line in it will end, and it will be necessary to insert a replaceable skein of new line. Some summer residents get stumped. how to do it yourself? So our article will help them.

Changing the line on the trimmer

This article will be able to tell you how to change the line on the trimmer. For some people, this job may not be easy. But the step-by-step instructions that are available here will help you in this matter.

READ  What Kind Of Nozzles Are On The Grass Trimmer

So the first thing to do is remove the gear cover. We combine the hole on the side of the curly lower washer and the axial recess, insert a screwdriver to fix the shaft from scrolling. Now unscrew the nozzle. The thread on the shaft, as a rule, has a reverse thread, take this into account when unscrewing.

Next, disassembly of the nozzle follows. There, the lid is fixed with latches through the holes. So you just need to push these clips into the holes and the cover will come off. If the attachment has automatic / semi-automatic line feeding modes, it means that there is a spring inside, which can simply fly out when the lid is opened, be prepared for this. We lay out all the removed parts neatly in order.

Now it’s time to take the line and unwind 5 meters from it, cut off this piece. Pay attention to its thickness, do not wind a line of greater thickness on the unit than specified in the manual for the tool. Otherwise, there will be an increased load on the engine and higher fuel consumption during operation. We bend the measured line in half to find the middle and get a loop.

There are a couple of notches in the middle of the coil, sometimes they are not notches, but holes located opposite each other. With a loop we cling to one of the notches and wind the fishing line counterclockwise. If the reel has 2 compartments, then we wind each end of the line on them separately. Leave the last 15-20 cm free and clamp them while in the recesses of the coil.

We assemble the device again, pull the free ends of the fishing line into the holes on the body. We put on the lid, snapping the latches into their grooves. Now you can pull out these loose ends of the line.

It remains only to attach the working node in place, as in the first paragraph. Do not forget about reverse rotation on screwing.

Now you can learn how to wind the line around the trimmer. Actually, the whole process was detailed above. No time-consuming operations requiring the presence of specialists. Your lawn mower is ready for use again.