Checking the breather and cleaning it.

The breather is another element, from the improper operation of which the chainsaw may not start or stall during the sawing process. This element is located on the fuel tank cap in the area of ​​the air hole. This is a kind of valve that does not allow gasoline to flow out and equalizes the air pressure required for the free flow of fuel into the carburetor.

If the breather is dirty, the working chainsaw stalls, and when started it refuses to start. The thing is that air stops flowing through the hole. As a result, a negative pressure (vacuum) is created inside the fuel tank, preventing the flow of gasoline to the carburetor.

Defining the problem is pretty straightforward. Disconnect the fuel hose from the carburetor and see what happens to the gasoline. If it flows out freely in a good trickle, then everything is in order with the breather. If it is absent or it flows weakly and intermittently, then the reason is identified the breather is clogged with dirt. You can solve the problem by cleaning the air hole with a regular needle or a powerful jet of compressed air.

This reason is easy to determine. In the event of a plug malfunction, the device starts up and stops working immediately. The accumulation of the fuel mixture on the electrodes and the build-up of carbon deposits on them leads to a malfunction of this element. To get rid of this problem, remove this element, remove the carbon deposits with a file, turn it out and wait half an hour until it dries. Drain the rest of the mixture, put the candle in place and you can continue working. 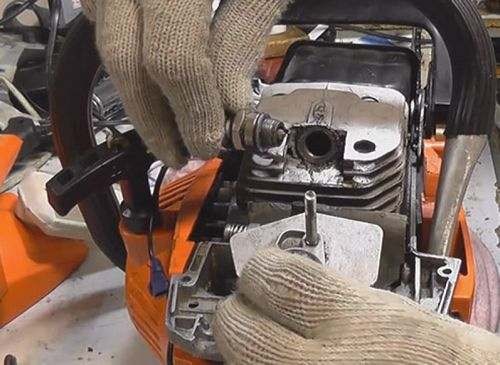 When you buy a new tool, you count on its quality. Unfortunately, not every implement meets the job requirements.

One of the reasons that a chainsaw does not start well may be a clogged exhaust channel or its muffler. At the same time, a drop in power is noted in the process of sawing lumber and logs. Most often this occurs due to tarry deposits on the spark arrestor or muffler channel, which are formed during the combustion of a poor-quality mixture of gasoline and oil, which impede the removal of exhaust gases.

READ  Which Chainsaw Is Better Husqvarna Or Stihl Video

Resonator clogged with carbon deposits can cause poor starting of the gasoline saw.

Eliminate the cause of the poor start of the chainsaw, in this case, you can remove the accumulated combustion products. To do this, perform a number of manipulations:

This problem most often occurs when trying to start the engine at a hot. To resolve the issue, turn the air duct flap horizontally and try to wind the mechanism. It may not start immediately, but after evaporation of part of the fuel mixture, it should start working. Warm up the mechanism for fifteen to twenty seconds, and then put it on idle. Open throttle fully and allow engine to dry.

Determine the availability of fuel and its supply.

First you need to make sure that there is a fuel mixture in the tank of a chainsaw that does not want to start, and it regularly enters the carburetor. With a full tank, we check how the mixture is fed through the gas line. Disconnect the fuel system pipe from the carburetor and try to pump it up. In the case of a complete order, when pumping, gasoline will be supplied in jerks in accordance with the standards set by the manufacturer. Poor or no fuel supply can result from:

Often the reason for a poor start of the chainsaw can be a tank that is too full. In this case, you should pay attention to the presence of smudges under the saw case cover. If present, see the connection of the gasoline feed pipe to the carburetor. Most often, it is squeezed out by pressure when the tank cap is screwed on, filled right up to the neck, which prevents the engine from starting.

The quality of the fuel mixture can also be one of the reasons why the chainsaw does not start. If, after completing the work, the remaining gasoline is not drained, and the tool is left for long-term storage (more than 2 weeks), then the processes of resin formation and polymerization of the components will begin to occur inside the tank. What can cause carbon deposits on the piston, rings and cylinder liner. Therefore, always prepare the mixture only in the required amount before work.

Why the chainsaw starts and stalls

If the saw does start, but stalls at the first attempts to do the job, the reason may be different. Reason # 1: chain jam due to lack of lubrication or problems with the chain brake, which makes further work impossible. In this case, check the oil level in the container. If everything is in order, the reason may lie in the tube leading the fluid to the lubricating mechanism. It can get clogged, break, stopping the movement of oil, or burst, causing the oil to flow out without reaching its destination.
Reason number 2 problems with the carburetor. Parts of it may have become unusable and require cleaning or adjustment. It is quite difficult to determine the breakdown in this case. Cleaning the carburetor is a rather difficult and monotonous task, which not everyone can do. The same applies to checking the condition of its parts. It is better to entrust such an operation to professionals. The only thing you can do at home (but only for some models) is to customize it. All instructions on how to do this are in the accompanying documentation.

READ  How Much Oil to Pour into a Chainsaw

The last reason is a banal low level of the fuel mixture in the tank. It manifests itself when the chainsaw stalls when tilted. The mystery lies in the fact that when the fuel runs out when you tilt it, it accumulates in a certain part of the tank. When tilted, the suction tube may end up in the airy part, which stops fuel supply to the chamber.

Why the chainsaw does not start well

There may be several reasons why the saw will not start well. It is necessary to check them in turn, excluding one after the other, approaching a guess. The simplest reason is lack of fuel or ignition off. So, you can fill the tank with a fuel mixture and check the start of the ignition system. If this does not help, proceed to checking the condition of the spark plugs.
The absence of spark from spark plugs is most often explained by 2 reasons. No. 1, carbon deposits have accumulated on the candle, which needs to be cleaned off. No. 2 candles wet from gasoline. The first sign of this is a strong smell of gasoline near the candle. The candle can be dried with a rag, having previously unscrewed with a key, or simply wait 10-15 minutes until the mixture wears off. If the candle gets wet often, it is necessary to determine the reason why too much fuel is supplied.
It also happens the other way around, when the candle is dry, and there is not even a smell of fuel near it. The reason for this is that the mixture does not reach the combustion chamber. This process needs to be restored to resume work.

Do not forget that candles are consumable and require periodic replacement in case of malfunction.
The air supply also plays an important role in starting. To eliminate the problem, remove the air filter. If necessary, clean it or sopun if available. The muffler may also need cleaning. Soot and carbon deposits accumulated in it affect the work.
The last thing to think about is a poorly formulated fuel mixture. But this is what can serve as a bad plant and poor quality work.
It is not recommended to carry out more complex breakdowns by yourself, for their solution it is worth contacting the nearest service center.

Reason number 1, which many users are faced with manufacturing defects. It is easy to determine, since the first start of the chainsaw is not possible. This is rare, but do not forget about the legislation and the possibility of returning the purchase within the allotted time back to the seller. The best defense is a warranty card with the seal of the distributor and the indicated serial number of the device. He will prove eligible for a replacement or refund.
But if the device worked perfectly during and after purchase, it is worthwhile to understand the probable causes of the failure. The nature of the failure will indicate the likely cause. So, a chainsaw may not start at all after a long break in work, not start after long work, or stall at the first attempts to start productive work, making sounds only at idle or low speeds.

Why the chainsaw won’t start

There are many reasons for the breakdown of such a complex tool. Therefore, it is important to immediately determine, why the chainsaw won’t start. This will allow you to put it in order on your own or with the help of outsiders. Sometimes the reasons are so commonplace that they are rarely mentioned in the instructions, but in most cases even small recommendations from there will be useful.

How to start a chainsaw correctly

Before starting the saw, it must be filled with a mixture mixed in given proportions so that there are no questions: why the chainsaw does not start. Further, the operations differ depending on the model. You can learn more about them from the instructions for the device. But, in general, the process looks like this. If there is a start block, it is removed and the saw brake is clamped, if necessary, setting it to an inoperative state. Pull out the choke lever. Then they turn on the ignition button and make several jerking movements with the starter, until a characteristic pop from the engine is obtained, indicating its performance, by clamping the rear handle with the foot. After that, you need to set the choke lever to the middle position and continue starting with the starter before starting work. Upon completion, the shutter is pushed in and the sawing process begins with the gas trigger.