Percussion Hammer Does Not Work

The horizontal layout is used, as a rule, in light perforators, vertical. In medium and heavy. However, there are exceptions. The heavy Metabo KHE 96 rotary hammer with a weight of almost 12 kg has a horizontal engine arrangement.

The horizontal layout tool is more compact and convenient for working in tight spaces. However, this design is characterized by increased shock load on the engine and somewhat worse cooling conditions.

The vertical layout provides better engine operating conditions (reduction of shock vibration and efficient cooling), as well as a wider amplitude of movement of the piston and hammer due to the possibility of using a crank mechanism with an increased piston stroke instead of a swinging bearing.

Rotary hammers with a vertical arrangement of the engine are capable of transferring more intensive work than models with a horizontal layout.

There are two main options for the execution of shock electro-pneumatic mechanism. Using rocking (“drunk”) a bearing or crank mechanism. The first option is used for light and, partially, medium perforators, the second. For medium and heavy.

The figure below shows a diagram of a lightweight rotary hammer. Its percussion mechanism consists of a swinging bearing, a piston, a ram and a hammer.

When the hammer is operated, rotation from the electric motor is transmitted to the inner sleeve of the swing bearing. At the same time, its outer sleeve, together with the perpendicular axis connected to the piston, oscillates. Between the piston and the ram there is an air space, which, due to the increased pressure and vacuum created in it alternately, causes the ram to repeat the oscillatory movements of the piston, striking the striker. The latter, in turn, hits the tool in the chuck. Thus, the energy of the electric motor is transformed into the shock energy of the tool. 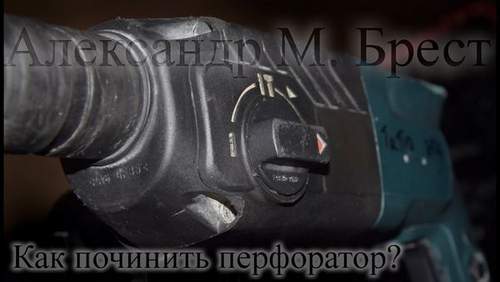 The pneumatic impact mechanism is equipped with an idle self-shutdown function. At that time, when the tool (drill, drill, crown) is not pressed against the surface to be machined, the ram moves forward, opening a hole for air inlet and outlet in the housing. As a result of this, compression and rarefaction are not created in the working air cavity, the percussion mechanism is turned off, and the hammer works without impacts. When the tool is pressed onto the surface to be treated, the hole is blocked by a ram, compression occurs in the air cavity, and the percussion mechanism begins to function.

In medium and heavy rotary hammers with a vertical engine layout, the piston is driven by a crank mechanism. The increased amplitude of movement of the pistons contributes to a higher impact power, which for heavy perforators can reach 20 J. The operation of the percussion mechanism occurs similarly to that described above.

At the end of the article there is a demonstrating the work of the shock mechanism.

The figure below shows the device of a home-made puncher Progress PE-40/1050, 1050 W power with a vertical engine and a crank drive of the percussion mechanism. The rotation from the engine through the worm shaft is transmitted to the helical gear, on the shaft of which there is a crank, which drives the piston.

At the end of the article there is a demonstrating the operation of an active anti-vibration system.

In addition, the handle can also be responsible for damping vibration: from the bottom, it is attached to the body using a hinge, and from above through a spring mechanism. By passive anti-vibration system they mean ordinary rubber pads on the body, which also protect against slipping hands. However, we must admit that the sense of overlays is not too great.

READ  The Screwdriver Does Not Work What Is The Reason

As safety in perforators, two types of couplings are used: friction and spring-cam. The first consists of disks in a normal state pressed against each other and transmitting torque. When the tool is jammed, the discs slip relative to each other, disconnecting the motor shaft from the cartridge with the nozzle. The friction clutch is used, for example, in Metabo models.

Many firms use spring-cam type safety clutches. They consist of two half-couplings having radially located protrusions and depressions (teeth) at the ends, which are combined in normal mode. The clamp of the coupling halves to each other is ensured by a spring. The principle of operation of the spring-cam clutch is based on the slip of the coupling halves relative to each other if the moment of resistance begins to exceed the compressive force of the spring. At the same time, a characteristic crack is heard, indicating that the nozzle is jammed.

READ  The Better To Cut Polycarbonate

It is believed that the spring-cam clutch is more reliable than the friction clutch, however, it also has a serious drawback. It lies in the fact that during operation, the tips of the teeth are rolled, which leads to the clutch engaging even when the nozzle does not jam, but only a lot of resistance arises. Some craftsmen cope with this problem by placing a washer 3-5 mm thick under the spring, which increases the compression force of the spring and, consequently, the moment of operation of the clutch. However excessive “rigidity” couplings are also undesirable, because they make the jerk of the tool too strong when jamming the nozzle, which can lead to injuries to the hands of people working with the hammer.

Grease is used to lubricate the gearbox, which is filled into the gearbox during initial assembly and during maintenance or repair. At those moments when the punch is disassembled.