I begin the series dedicated to reworking the battery for an 18V Angel screwdriver with the replacement of nickel-cadmium batteries with lithium-ion ones.

Step 1. Dismantling the old battery:The first step is to disassemble the old battery, remove the nickel-cadmium batteries and the contact group from it. We do not need old batteries, moreover, as can be seen from the, their condition is very poor. But we really need the contact group, so it is advisable to remove it so as not to break the contacts and the plastic holder.Third contact. From the thermal contact and the thermal contact itself we do not need.Subsequent preparation of the battery case. This is his cleaning, from dirt and oxide.

A hole must be made in the battery for installing the RS 232 connector (9 legs). Through this connector, the battery is charged and switched in use. It’s easier to do all this with the help of a workpiece, which we get from the RS 232 socket (“dad”) The blank must first be tinned for high-quality heat transfer from the heater-soldering iron. The required power of the soldering iron. From 40 W and above. Before receiving the hole, the lower part of the battery case must be secured in a vice. You need to melt the hole in such a place so that the wires and mountings of the socket do not interfere with the placement of the batteries. After melting the edges, you need to file with a file and drill two holes for fixing the connector for M3 screws.

After preparing the case, we begin the layout of the batteries. First of all, let’s try to place them in the battery for subsequent soldering. Let me remind you that the batteries are arranged in pairs to obtain greater reliability and current output. As you can see in the, 8 batteries or 4 pairs are placed. A simple calculation shows that the total voltage during serial switching is 4×4 = 16 V. Some users will have a question: how to get 18 volts? The answer is simple. As practice has shown, we do not need 18 volts and 16 V to work more than enough.Next, we pick up the batteries in pairs. The principle of battery selection. Orientation on their residual capacity, which should be approximately the same. Important is not the capacity of a single battery, but the total capacity of a pair. For example, a layout of 1.0 Ah and 1.5 Ah (11.5 = 2.5 Ah) may be valid. Absolutely unacceptable option, when the capacity of one of the pairs is significantly less than the others. Such a pair (weak link) of batteries during operation will be discharged by the very first, and the remaining charge will not be effectively used.

An important point in battery assembly is also their isolation from each other. Practical experiments showed that “dear” insulation is not very reliable, and the use of thermocambrics is impractical. The most practical insulation is made of copier paper. Firstly, it is heat-resistant, secondly cheap and thirdly, paper insulation makes it easy to replace the battery if necessary without disassembling the entire battery. 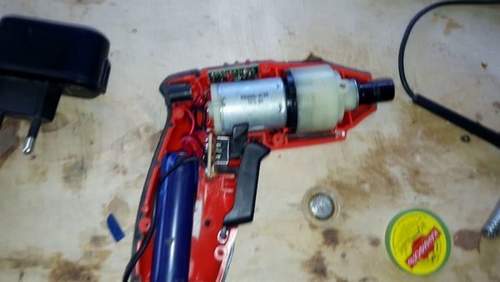 Step 6. Tinning the battery contacts for the Einhell screwdriver:To tin the contacts, use a 40 W soldering iron, F1 flux and solder. Remember that the positive contact cannot be heated for a long time due to a possible battery failure

See also  The cutter for installing locks in the door

Step 7. Soldering the switching socket for an Angel screwdriver:As a jack for charging and operational switching, a RS 232 connector (socket) for 9 legs was used.Previously, the legs of the nest are tinned using solder and flux F1 or rosin.

Since we have 4 pairs of batteries, we need 8 conductors. Each conductor is soldered at one of the poles of the battery and the leg of the socket. The wiring diagram is shown in the figure in the. The length of the wires is chosen experimentally, trying on the distance from the place of attachment of the socket in the battery housing to the farthest pole of the battery. After removing the insulation and tinning of the conductors, they are soldered to the legs of the socket.

After soldering, it is advisable to wipe the legs with alcohol and remove excess flux or rosin. For the electrical insulation of the legs, I use a thermocambric, which after installation in place I heat with a lighter.

Step 8. Soldering jumpers on the battery pairs of an Angel screwdriver:The electrical connection of the elements in pairs can be done with a wire without insulation, as you can see. The only thing to consider. Termokembrik on the jumper of positive contacts.

Step 10. Complete the installation of the battery to the Enhel screwdriver:To complete the installation, solder the wires from the contact group to the poles of the battery. The soldering circuit is shown in the.We solder the switching plug (RS 232 connector), which during operation of the screwdriver will connect all the batteries in series. You can see the soldering circuit in the. After soldering is completed, we check the operability. I recommend isolating the place of soldering using cold welding. Simultaneously with insulation, cold welding will play the role of a shortened housing for which the plug is inserted into the socket.We make final assembly of the battery case and practical tests with a screwdriver.I will not return to the question of how to charge the battery, as it was discussed in my previous topics and in the.