Replacing Brushes on a Metabo Screwdriver

The screwdriver may not turn on for three main reasons: the battery is faulty (not charged), the power button is faulty, the engine brushes are worn, or the anchor itself burns out (very rarely).

Battery. The battery test is carried out by simple measurement on its DC terminals with any tester. The output voltage of a working charged battery must match the one indicated on the case. 12v, 18V, etc. Otherwise, the battery must be replaced. A screwdriver charger may also be faulty.

Speed ​​control and reverse. Checking the speed control of the screwdriver is done with a multimeter in the continuity mode of the chains. It should be noted that if the button is fully pressed, the contacts are closed in it and the voltage to the engine (to reverse) is applied directly, excluding the speed controller circuit. Two wires from the battery come to the button, after it two wires are connected through the reverse contacts to the engine. The power button can still have three wires for connecting a regulatory element (field effect transistor), which is removed from the housing. For dialing, the probes are connected to the input and one of the motor wires (if possible, to the input contacts of the reverse) in turn, then the button is pressed all the way. The device shows the presence or absence of contact, after which the second input wire is measured. We translate the reverse lever and repeat the measurements. If there is no contact, the button changes.

Do-it-yourself screwdriver button repair is possible, but only if you have certain skills. It is important to understand that after opening the case, many switching details will simply fall out of the case. This can only be prevented by smoothly lifting the cover initially and by descriptively sketching the location of contacts and springs. If darkened contacts are found, they are cleaned with sandpaper. After assembly, repeated measurements are carried out and with positive results (there is contact), the button is installed in its original place.

It should be noted right away that if after repairing the button, the screwdriver’s engine started working when the button was pressed fully, and when the button is pressed smoothly, the speed control does not occur, then the reason should be found in the adjustment scheme. Most screwdriver repairs in this case come down to replacing the entire button.

If there is no reverse, it is necessary to replace the reverse switch or try to repair it. To do this, open the switch cover and, as in the case of the button, carefully lift it. We check the contacts, clean and collect. If the contacts are burnt or deformed, the reverse must be replaced. There are options for buttons in which the reverse is assembled inside the button body, in this case the entire button is changed. 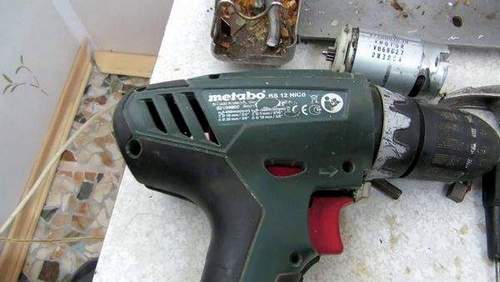 If, when you release the button, the engine continues to spin, but before it did not spin, in this case, it is necessary to pay attention to the speed regulator, namely to the regulating transistor. It is necessary to replace either the entire button or the transistor separately.

Electric motor. If all of the above operations showed the serviceability of the elements, then it is necessary to check the condition of the engine brushes. To do this, the engine is disconnected from the button, and the multimeter probes are connected to the motor wires. The absence of low resistance in the circuit indicates wear of the brushes, but the breakdown of the armature (open winding) should not be ruled out, although this is very rare. Usually, in this case, the engine changes entirely, but when the brushes are worn, it is possible to restore the screwdriver’s engine on its own. Some engines can replace brushes without disassembling the engine. For others, it is necessary to separate the rear engine cover with brushes from the engine housing.

To do this, it is necessary to bend the rolling of the cover, but in such a way that the edges do not break off, since they will need to be returned to their place after assembly. The flexible wire of the brushes is connected to the holder by spot welding, but the wires of new brushes can be soldered, but only with refractory solder, for example POS-60. Before assembling the engine, the brushes are removed in the brush holder with a thin wire clamp, the cover is put in place and the wires are pulled out, thereby brushing is released. Next, go around the edges of the case to firmly press the back cover.

Extraneous whistles and creaks during the operation of the screwdriver can be caused by wear of the armature of the armature or a detached magnet that comes into contact with the armature. In the first case, you can extend the life of the engine by dropping a drop of oil for precision instruments on the bushings, and then turn on the engine so that the oil spreads across the bushings themselves. In this way, you can only extend the life of the engine, but over time you still have to replace it.

Gearbox. From the long work of the screwdriver under heavy loads and with lateral pressing, the gearbox shaft bends, on which the cartridge is screwed, a strong beating occurs during the operation of the screwdriver. The support sleeve or bearing of this shaft may also wear out. If only the sleeve or bearing is damaged and the shaft is not curved, then you can try to replace only worn parts.

It may happen that the engine starts for a split second and stops abruptly. Everything indicates a breakdown in the gearbox, usually a breakdown of the pin on which the satellite is mounted. You can try to replace the carrier or the entire gearbox. The failure of the gearbox often occurs due to wear of the gear teeth. A detailed description of the screwdriver gear device is available here.