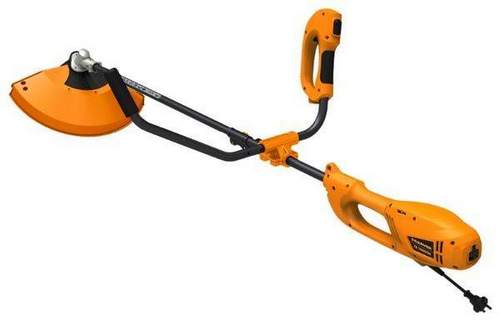 The rod hangs a little at the connection point, I would like to be tougher

Indistinct indication of how to wind the line. The instructions say “in the direction of the arrow”, on a reel TWO arrows in opposite directions. You can understand the desired direction only if you know the direction of rotation (and a little physics). The wife somehow wound in the wrong direction, the coil was sorted out almost immediately after acceleration, and they hardly found a spring.

Second year trimmer. They started to mow when the grass was more than a meter from the ground. Plot 2 years no one touched. If you try right near the ground. A lot of grass is wound, accounted for in two or three passes. Mowed fishing line. With short grass is much easier.

Recently found that the head can not be turned away. Either sour, or one of two. Wd40 does not take, there is not enough hand effort, I’m afraid to touch the tool so far so as not to break the plastic. The direction of the thread is not indicated anywhere, only by the nut for the knife you can understand that the left.

READ  How to Insert a Fishing Line into a Carver Trimmer

Bicycle handle. With a weight of 5kg a tangible plus.

The design of the bicycle handle. Floating and left sides are connected in a groove into a single rod, increases reliability, because one side will not fall off (several years ago there was such a problem on the braid of another manufacturer. The left handle fell off). Here it is ruled out if it falls apart. Then all at once :).

Attaching the protection to the gearbox. Both plus and minus. But plus the fact that not so loose will be, as when attaching a clamp to the bar.

Convenient start key, when working, the hand does not get tired at all. Pressing with the whole palm, protection against accidental start-up, you press with your thumb only at the time you start work.

Instruction.- there is a complete diagram of the trimmer parts in the analysis, with the name and serial number of each part, from the engine to the last nut.

READ  How to Put a Canvas on a Hacksaw

Spool for fishing line. It looks quite reliable, but disassembled without significant effort (there was an experience with other spools that opened very hard).

Included is a set of tools for the benzo trimmer, and this one is electric!

This bike rack is hard going. Getting with two bolts is difficult enough, the feeling is that “led” plastic by a few tenths of a millimeter.

Frankly bad fishing line included on the spool. You can immediately remove and throw it away so as not to suffer and not spoil the first impression of, in principle, not a bad trimmer. Buy normal fishing line separately at once.

A simple belt. It would be possible to equip with a thigh pad already, since the claim for “has grown up”.

Compound protection shield. An additional pad is installed on the small one for the knife when mowing fishing line. On the “bend” a small one (it sticks out from the bottom with a large defense right in the middle) sticks a lot of mulch.

READ  How To Run The Trim Carver

Attaching the protection to the gearbox. Bolts are screwed in from below, it is not convenient to control, there is no control nut. Only a graver, but there is also heating and increased vibration.