The drill does not work at low revs 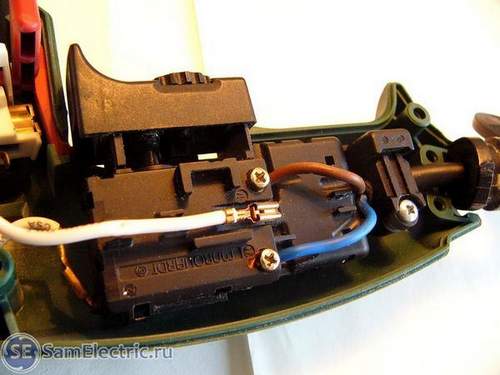 Sometimes a construction tool becomes a victim of malfunctions at the most inopportune moment. To correctly repair the electric drill, you need to imagine how the tool is arranged. The features of the electric drill device are described below and recommendations are given what to do in case of the most common malfunctions.

To understand how to fix a drill, you need to be able to determine in which of the blocks a malfunction occurs. In the electric drill device, mechanical and electrical components are released. Both of them are mounted inside the case. On the shaft is a cartridge into which the drill is placed.

The electrical circuit of the drill is sometimes placed in the instructions for the device. A wiring diagram may be required for communication problems between the components. Usually this part of the device consists of:

The components of this part include a bearing combination and a gearbox that reduces the rotation speed when transferring it from the engine to the shaft. An impact drill includes other elements: two types of pistons and a ram.

It should be noted! Soviet-made drills differed from the current ones in some design features (they did not have a reverse and hammer drilling option).

The most common problems with the electrical component are cases where the drill sparks on the brushes due to their significant grinding or wear. A device with very worn brushes will not turn on at all. A sign of problems with the engine is the absence of signs of its inclusion (sound, vibration, etc.). With a speed-controlled drill, reverse and speed control may stop functioning.

Mechanical failures. Failure of the bearing or gear mechanism, shaft failure. They are manifested by buzz, periodic device stops, slow rotation. Sometimes there are problems with the cartridge: difficulties in disconnecting the drill, twisting the cartridge relative to the shaft.

See also  How To Remove A Drill From A Screwdriver

Algorithm for finding and eliminating breakdowns of the electrical part

If you intend to repair the drill, you must adhere to a certain algorithm, starting with the simplest and most common problems and filtering them out as you diagnose:

Important! Do not check wire contacts with voltage on. This is fraught with a shock or a short circuit situation.

The following are measures to repair an electric drill with your own hands for the most common malfunctions.

This is a very common problem that occurs with high loads on the mechanism (long work without respite, excessive load with a jammed drill) or defective windings. A common symptom is the smell of burnt. For fidelity, you can check the resistance of the windings with an ohmmeter and a tester. The case of the device must be opened, remove the brushes and remove the motor with bearings. The element that caused the problem is deleted and replaced with a new one or sent to the workshop for repair.

Test the voltage at the switch terminals. If it is not, the body of the button is removed and contacts are checked. Processed with alcohol and emery, tested again, if there is no signal. Change the button. You can also check the connection diagram of the drill button and check for contact with the wire. In its absence, the wire is soldered.

Problems with the gearbox are indicated by grinding sounds or a jamming cartridge. Gears are checked, if there is wear or deformation of the teeth, they are replaced. Bearings are checked by rolling the shaft. With a tight course, they must first be lubricated.

See also  How to Insert a Drill into a Makita Hammer

The need to replace the cartridge is signaled by difficulties with removing the drill. The cartridge is removed by first unscrewing the screw or knocking it out by tapping the end (if it is fixed with a cone).

The trigger and the regulator begin to jam due to problems with the chip. The regulator, mounted in the button-switch, is removed together with it, installed separately. Removed, after separating the contacts, and replaced with a working one.

The button is also easier to replace, but you can try to repair it yourself. The knife pulls the tabs, removes the lid. Dust the inside with a cotton swab soaked in alcohol. They take out the microcircuit and sequentially ring the parts. Defective replace. Often, dusting is sufficient to restore normal operation.

The reverse does not work, or the drill does not turn to the right

If the drill does not turn left or right, you must check the state of the switch button. If necessary, replace it or clean it from the inside. The reverse is called on the left and on the right, if at least once the ringing failed, it is recommended to replace the button.

Connecting a drill to a cable without a button

In case of difficulties with low revs, it is necessary to check the regulatory mechanism and soft start. With the ability to work exclusively at low speeds and heating the body, the brushes and the collector are also inspected.

The drill does not turn on

Checked button for drill, capacitor, power cable and contacts. If all these elements are in normal condition, press a button and examine for signs of engine problems. Wireless devices can help recharge the battery.

The drill is cracking but not spinning

If the motor removed from the housing does not work, the gearbox must be replaced. If it works, check the windings (starter and rotor) and brushes.

A visual inspection reveals deformed turns, molten wiring, and a damaged manifold. You can repair the anchor in the workshop or replace it with a new one. Before pulling it is separated from the gearbox and stator. The winding can be rewound independently.

A multimeter test is carried out at a resistance of 200 ohms. The windings should have the same performance. If damaged, rewind.

See also  Why a single-axle tractor does not start in winter. How to start technique after winter

Bearing removal is carried out with a special tool. In its absence, the rotor is hung on metal plates so that it is lower, and the bearing is higher than the plates, and a wooden spoon is tapped on the shaft. Install a new quarter-inch socket head bearing. To drive an element into place, tap on it with a hammer.

If the drill battery does not charge

The battery is disassembled, the resistance on the primary winding is checked (absence indicates a broken circuit), as well as the windings and the fuse. If there are breakdowns, the transformer must be replaced. Also check the components of the board, if necessary, change to new ones.

Plastic plates are more stable, if possible you should buy just that. The rubber can be fixed by putting it on the bolt with the working side to the hat and placing a large washer on top. Then the design is tightened with a nut.

The cartridges are not the same in size and outer diameter. When the new cartridge has the last parameter larger than the previous one, additional nozzles cannot be used. This must be taken into account. However, key and keyless chucks of different sizes (but with the same diameter) can be replaced one by another. If contamination is clogged in the cartridge, it can be cleaned by disassembling. They put it on a vice with their fists up, put a plate of metal and hit it hard with a hammer, then the sleeve drops below. They remove the washer and fists, check the condition of all components, replace the damaged ones, and remove dirt.

When planning the repair procedure for a drill with your own hands, you will need to prepare the following tools:

In order to competently make an independent repair of a drill, you need to imagine the device of its electrical and mechanical filling. In this case, most malfunctions can be eliminated at home.