Whether Oil Is Added To The Trimmer 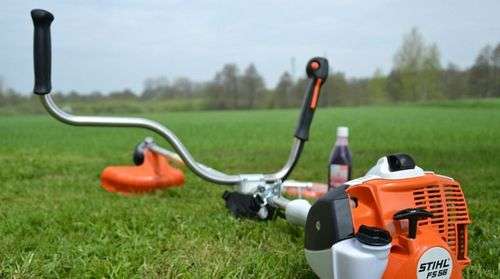 Lawn mowers are a fairly common technique for controlling weeds in summer cottages, in household plots, on the road, and in housing and communal services. These devices have two more names. Trimmer and lawn mowing. These units differ in their engines. The more expensive of them have four-stroke engines, all the rest are two-stroke. Of course, the latter are the most popular among the population, as it is both simpler in design and mass lighter and much cheaper than its four-stroke competitors. However, two-stroke models are inconvenient in that the fuel mixture for them must be prepared manually, withstanding a strict dosage between gasoline and oil. In four-stroke analogs, the mixing of these components occurs automatically, you only need to fill the gas tank and oil tank with the appropriate substances. Let’s look at the question of the correctness of refueling just the push-pull lawn mowers, since it depends on how efficient and long the operation of such an aggregate will be.

First of all, it is necessary to take into account the information recommended by the manufacturer, since in case of failure of the lawn mowers, you can make your claims to him, and not to an external source. If there is no instruction in the passport, and even more so if there is no passport, we recommend that you look for a different trimmer model from a more reliable seller.

For all other cases when you have a model of lawn mowers in your hands and there is no way to find out its technical features, there are standard proportions of the most likely components of the fuel mixture for a two-stroke engine. Mostly for these units, AI-92 grade gasoline and special synthetic oil are used, which contains a solvent for better mixing with fuel. Such oil evaporates slowly and has the ability to completely burn in the cylinder without leaving a deposit.

The standard ratio of synthetic oil to gasoline is 1: 50. This means that for 5 liters of gasoline you need 100 ml of oil, and in accordance with this, the oil consumption per 1 liter of gasoline is 20 ml. Knowing the amount of oil needed to dilute 1 liter of fuel, you can easily calculate any norms when preparing fuel for the trimmer. When using mineral oils, the ratio of 1: 40 is most often standard. Therefore, 25 ml of such oil will be required per 1 liter of fuel, and 125 ml per 5-liter canister.

When the lawn mowers are working, a person who has little experience in operating such a technique will easily find and correct the actual amount of oil needed for a particular model. It is only necessary to pay attention to exhaust gases (their color, odor toxicity), cycle stability, engine heating and developed power. Details about what consequences from the wrong proportions of mixing gasoline and oil can be expected are covered in another section of the article. There are options for lawn mowing running on AI-95 gasoline. This should also be considered.

And now about how to mix components correctly. However, it will be more logical to start by analyzing common, but absolutely unacceptable errors that many owners of this mowing unit “sin”. The following actions are considered to be errors in mixing the fuel mixture.

Given all of the above, we recommend using the following rules when mixing the fuel mixture for two-stroke trimmer engines.

It must be borne in mind that the finished fuel mixture should not be stored for more than 14 days, as it loses its properties, delaminates and evaporates, which leads to changes in the proportions, and hence the deterioration of the trimmer.

The consequences of a violation of the ratio

The working life of the engine of the motocosa depends on how accurately you comply with the proportions of the oil-gasoline mixture recommended by the manufacturer. The fact is that the fuel mixture enters the cylinders in the form of gasoline-oil mist. And the task of the oil composition is the lubrication of moving and rubbing parts and surfaces of various parts located in the cylinder. If it suddenly turns out that the oil is not enough, and somewhere it will not be enough to get enough, the parts in contact with dryness will begin to damage each other. As a result, galling, scratches and chips are formed, which will necessarily lead to complete or partial unsuitability of the engine (for example, it may jam).

In the opposite case, when too much oil enters the engine, it does not have time to completely burn out, settling on the cylinder walls and eventually turning into solid particles. Coke, slag and the like. As you might guess, this also leads to engine failure. The most important thing that should not be allowed. Even a single violation of the proportions in the direction of lack of oil. It is better to pour a little oil 10 times than not to add only 1 time. It often happens that this time is quite enough to break the engine.

How to choose for lawn mowers?

For two-stroke engines, the lawn mowers use AI-92 or AI-95 gasoline. Most often. The first of these. Information on this is necessarily available in the technical passport of the product. If for some reason it is not known exactly which gasoline the trimmer should work on, you can choose it by testing both brands of gasoline in action. There will be no global changes in the engine from this, but it is quite possible to determine which gasoline this or that model of the unit “loves” more. This will be shown by the developed power, and throttle response, and heating of the engine, as well as its stable operation at all speeds.

But with the proportions of oil to a certain volume of gasoline, it is much more difficult to determine. In this case, you need to know at least something about the manufacturer of the equipment. And already, according to standard proportions for this manufacturer, choose the proportion for a particular model taking into account the type of oil.

For instance, For Chinese low-power trimmers, two ratios are mainly used. 1: 25 or 1: 32. The first is for mineral, and the second is for synthetic oils. About the choice of standard proportions for lawn mowing European and American manufacturers in connection with the type of oil, we have already said. In the oil class for household trimmers, you need to use TV oil according to the API classification. For more powerful. Ts class.

For the ratio of gasoline and oil necessary for lawn mowing, see the next.