Wood sanding machines with their own hands

A machine with a belt is more versatile in terms of functionality: it does everything that disc models, plus many more. Immediately notice that the options of amateur models of belt grinding machines a great many.

The fact that the nature of this machine is very plastic, allowing the use of a variety of improvised materials, up to finds in scrap dumps.

The main thing is to know and adhere to three rules:

Disc grinder with their own hands: drawings

Made for his home workshop circular grinding machine. Of course, for grinding, I’ve used a variety of tools before, but also decided to make a disc sander with his own hands. And here is what actually turned out: 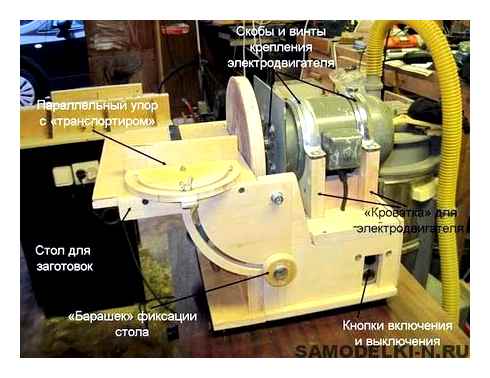 I will highlight some of the features of my design. Since the idea of manufacturing grinder was born a long time before the start of his work to create, began to look for components that may be useful in its manufacture.

Such a component became an electric motor AOL-11/4 from decommissioned VU-700 (input device for entering the footplate). This electric motor at low power (120 W) is characterized by a fairly high torque rotor (22 kgfcm2). so, the presence of 3-phase voltage of 380 volts in the garage allowed me to use the technical capabilities of the motor to the maximum.

I began by measuring all the overall dimensions of the motor and the choice of its mounting. Due to peculiarities of its “origin” and previous use, the engine had only a flange mount (for the front cover). It was decided, except for the flange mounting, to make a “crib” for mounting behind the housing (as “feet” mounting were absent). Based on the results I developed the following drawings.

In addition to the characteristics, this electric motor “attracted” by the presence of the “standard” factory nozzle on the motor shaft. The use of this attachment made it possible to mount a disk for sanding sandpaper for the future of the grinding machine. I decided to use a disk with a diameter of about 200 mm.

In addition, I calculated the swivel bracket of the tilt table.

Then I began the practical fabrication. I started with fixing the motor by its flange and into the “crib” made according to the drawings. As clips for fastening I used plumbing fittings, for fastening thick plastic sewage pipes of suitable diameter.

I sawed and fastened a disk of plywood with the thickness of 20 mm on the nozzle. Right on the shaft, turning the motor into the network, and using an angle grinder with a grinding nozzle I eliminated the run-out of the disk The holes under the heads of the fastening screws poured hot melt glue and grinded flush with the front side.

To start (supply three phases of voltage 380 volts) electric motor made “starter”. Acquaintance with a range of “starters” in stores of electrical goods with a minimum price tag of 700 immediately discouraged their purchase. Having spent a pair of hours on fitter’s work and a couple of hours on electric installation (soldering), from the available “radio amateur stuff” I have made such a device.

Then, according to the drawings, with some differences in place, made the base of the grinder, a sloping table and container (compartment) of the dust collector.

When installing the motor mount on the base unit, I always considered the need for alignment (vertically and horizontally) of the disk for the sanding wheel in relation to the table.

On the disk glued sanding sandpaper (glue 88). Made (by place, without drawings) the front cover of the dust collector with a pipe for the connection of the vacuum cleaner.

Installed the “starter” in the base of the grinder. Under the “Start” and “Stop” buttons I sawed a rectangular aperture.

What kind of sander is best for finishing

Belt-disc grinding machine with their own hands: drawings, photos of manufacturing

Homemade belt-disc grinder: detailed drawings and photos of the step-by-step manufacturing of the machine.

Greetings to all! Here is time “to report” on the “creative” work done, about the construction of the belt-disc grinding machine, which is shown in the photo below.

The process began with an Internet search for industrial samples of machines of this type and the experience of other homebuilders in making belt machines. Industry offered mostly constructions made of metal and plastic, home-made designs were mostly in wood (plywood), except, of course, for the electric motor, bearings and shafts made of metal.

I decided to make my own machine, wood and metal.

The electric motor and the grinding belt I selected determined the basic dimensions of my future machine. Recalculation of motor speed (at gear ratio from motor to belt drive shaft 1:1) in the linear belt speed gave the result 7.6 m/s, it fell about in the middle of the belt speed range (from 4.1 to 18 m/s), which were used by the industrial machines I had studied. I was quite satisfied with this result.

As in the manufacture of previous machines, began with the measurement of all the overall dimensions of the motor and the choice of options for its mounting. Constructive version of the motor AOL 012/2, according to the method of installation, is made with a connecting flange on the bearing plate with the feet (GOST 2479-79). It defined at once the variant of the motor fastening on the machine bed. On the basis of the results I made drawings, according to which the structural elements of the future machine were made.

The following shows the drawings and dimensions of the belt-disc grinding machine:

Taking into account dimensions of the electric motor, the drawing of the base (18 mm plywood) was made.

Based on a number of bearings with an inside diameter of 10 mm, an outside diameter of 30 mm and a height of 9 mm, with covers (bearing series 200, 18200, etc.), the drive and driven rollers are designed according to the dimensions of the grinding belt used.д.) it was decided to make the shafts 10 mm in diameter. When making the shafts (and other elements) it was not planned to use a lathe. The width of the rollers was selected on the basis of the used grinding belt. The design drawing of the driven and driven rollers (rollers) is as follows.

Design of “skewing mechanism” of driven roller shaft in order to stabilize belt position. See drawing of the “tilt mechanism”.

Developed the layout of the belt table, the method of tensioning the grinding belt, the mechanism for changing the belt. It was planned to fix the bearings of the drive shaft in cages made of water pipe, welded to the right and left sides of the base of the band table.

Plates of the belt tensioning unit are designed and calculated. On the previous drawing these plates are marked with the numbers 1, 2, 3 in circles.

Belt grinding machine: study and do it yourself

Belt grinding machine is used in those cases where it is necessary to perform finishing processing of parts, that is, as equipment for the implementation of finishing technological operations. Most often such machines are used in the furniture industry, with their help perform processing of parts made of wood of different species. But it is possible to use a belt-grinder and for processing metal parts, which applies a belt with the appropriate abrasive material.

Belt grinding machine with their own hands without turning work

Makeshift belt sander made without welding and turning work, a detailed description of making a homemade with a photo.

Belt grinding machine, a thing quite necessary in the home workshop. For its manufacture requires turning and welding work, but not everyone can find a welder and a lathe in the garage. As an option, you can get by with a simpler design where turning work is not required.

How to make a belt sander with their own hands?

If you can not lay out a sufficiently large sum of money for a decent version of the drum grinding machine, you should try to make it by yourself. For a person who is not bad at mechanics, this is not too difficult a task. In addition, this way you will be able to save significant monetary resources.

In order to assemble a drum grinding machine at home you need to get hold of the following parts:

See also  How to use an electric jigsaw for wood

Once the main parts of the machine are assembled individually, you can proceed to the final assembly of the entire machine. First attach the motor to the bottom of the machine housing in place of the pre-drilled holes. The grinding drum is installed in the upper part of the housing and fixed to the two bearings, which are located on the side walls of the housing.

It is worth noting that the independent creation of a drum sander also does not do without certain costs. First of all it concerns your time, but the machine will cost you cheaper than the factory one, only if you have a working motor. Without the motor and certain skills it is almost impossible to create a cheap analogue of a brand-name machine.

Different models of sanders allow you to process all kinds of wood materials.

Before you begin to make a homemade wood sanding machine, it is important to determine for what purposes it will be needed.

The technical parameters of the tool will depend on this:

The process of making a homemade, is shown on these

Connected the motor according to the following diagram.

To make the machine easy to carry, a handle was made.

Using a compass, marked the center on the pulley of the motor and drilled three holes in order to install the grinding wheel.

A circle was outlined on a piece of plywood, which was then sawed along the outlined contour with an electric jigsaw.

To fasten the motor to the bed, I used corners.

On the obtained points of support the shelf was fixed, which provides a more convenient processing of workpieces.

We made these rubber legs screwed to the base with self-tapping screws.

It is very easy and comfortable to work on this machine. The workpiece is laid on the shelf, unfolded on the desired side, and grinded. And, what’s important. not a penny is spent on this machine, and as a result, it will last a very long time.

As a side note, for those who will make such a little machine, we suggest to make the guides, like sliders or rails. They must be parallel to the grinding wheel. So you can level the workpieces straight, which is very important.

To clean the grinding wheel, it is possible to use a metal brush. As an option, make removable discs on Velcro, so you can make a quick replacement of the used grinding wheel.