How a Tornado Cultivator Works 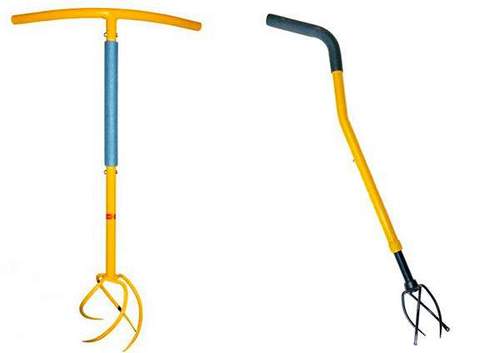 Private sectors and gardens need to be weeded twice a year and dug up for a good crop. Many annually use conventional bayonet shovels for such time-consuming work and are not even aware of innovative hand tools like the Tornado cultivator. Now spring work in the garden will take less time and effort.

What is this device, how does the cultivator work

In short, the Tornado cultivator is a root eliminator or baking powder, an environmentally friendly multi tool with several functions.

The Tornado hand cultivator, by type of construction, consists of a metal rod. On one side of the shaft, a handle similar to a bicycle handlebar is mounted. The other end is equipped with teeth. However, those same teeth have a spiral shape, rotated counterclockwise.

An important design feature of such a tool is in adjusting the rod for growth. Because of this, you can use the tool to a capable person with any height, and even a child above 1 meter.

Many will ask how this tool works correctly. Everything is simple. You need to install it perpendicular to the plane of the earth and turn until the teeth are completely immersed in the mail.

A lot of good has been shot about the work of the tornado cultivator. For example, this one:

Even a fragile girl easily processes ridges of several tens of meters with just such a cultivator. Interestingly, the load distribution is thoughtful. The user does not tear his back, but works with all parts of the body. The arms, back, shoulders, legs and torso are involved. If there is a load distribution, then exhausting when working with a tool is almost impossible.

Experts advise using such a tool in abandoned or neglected areas, because the removal of weeds and wild plants is the main function of the cultivator. Compared to the chopper, this cultivator will save both time and effort. There is no need for an uncomfortable body position during work, as well as periodic bends and squats.

How in practice they work as a manual cultivator and root eliminator of a tornado is shown in the:

If you test a cultivator or root eliminator together with a shovel, it turns out that the shovel processes the soil 4 times slower. Over, it does not matter who exactly used the tools, because when comparing, you need to perform chaotic movements at a certain pace.

Proper soil tillage is done by loosening, rather than moving the bed. The natural layer and the shallow root system are violated with aggressive digging with a conventional bayonet shovel. Proper use of the root cultivator maintains the right environment for future plants.

Benefits declared by the manufacturer:

How a Tornado Cultivator Works

Externally similar to a cane, the lightweight hand-held cultivator Tornado mini is a great helper in removing weeds and shoots. It is necessary to improve the garden and summer cottage area constantly, but most physically cannot cope with such monotonous work. Digging up small sprouts with a spatula or sap is much more labor-intensive than “picking” unnecessary vegetation with a simple movement of the hand.

The Mini Tornado Cultivator is a lightweight version of the classic model. Differences and features of this tool specified by the manufacturer:

If there is any doubt about the choice of a cultivator and the price for it, then it is better to purchase the most budgetary model. A tornado root-cultivator.

The recommended price for the tornado cultivator of this model is only 800 rubles.

The Tornado cultivator model on the market of garden tools is not the first year, it has earned wide attention and approval from people with a broken spine. Practicing users argue that the most basic load is only on hand.

Incredulous summer residents, having seen this innovation in the construction market, are in a hurry to do, first of all, comparison. And for this, a classic Tornado and a cheap bayonet shovel are bought.

A few squares are measured on the site to test well-being and the promised lowered loads.

As a result, a shovel with a handle is used exclusively when creating pits for a fence or compost. The cultivator cultivates the soil, forms holes for seedlings, weeds all the abandoned and forgotten corners of the plot with ease and desire.

According to adequate and grateful summer residents, the Tornado can:

But the cultivator cannot:

When working with all the force on the tool is not worth it. It is better to make translational movements, the cultivator will scream into the ground itself thanks to the design of the rods. Over, the land layer will retain the correct structure.

In addition to the usual cultivator, a model of a potato digger for summer residents was created:

The photo shows that the design includes a locking pin, 3 working teeth, a bicycle handle and a base with a fixed length.

A potato digger cultivator will make it easier and faster to harvest potatoes. This patented tool will allow you to go through the crop area row by row in seconds.

What is the principle of work?

The cultivator is set at an angle of 90 degrees to the ground, slightly fixing the foot. In parallel, the potato row is rotated around an axis. It turns out that the rounded rods or teeth of the cultivator remove all tubers from the nest from the autumn soil in one motion.

After an annual, difficult and tedious harvest of potatoes, this tool will add variety to rural and country work, save energy, time and mood.

Those who believed in advertising and began to acquire “miracle” tools for the garden and cottage have repeatedly mentioned the entire line of Tornado cultivators with just a good word.