How to Cut Plywood Without Chips

It is believed that without a professional tool, a quality cut of wood or sheet materials cannot be performed. Today we will talk about ways to make a clean even cut without chips, on our own and without using expensive equipment and supplies. 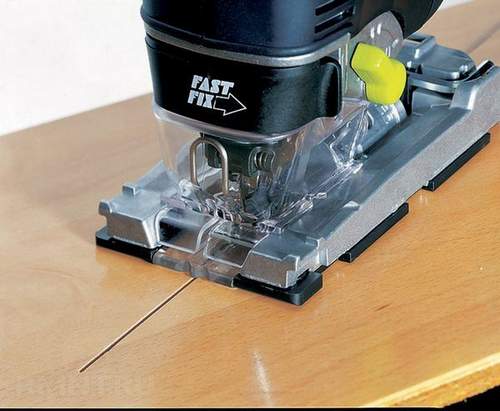 Tools for cutting and mechanics of their work

If you do not take into account stationary sawing machines, there are not many alternatives for manual work. Of the available tools, you can offer circular and pendulum saws, in common people called trimming and jigsaws. It is also possible to perform a sufficiently high-quality cut using a angle grinder, on which a saw blade is mounted on a tree with victorious teeth. But this is not the most effective and, moreover, far from safe option.

In the process of cutting with any type of power tool, the working bodies move at a very high speed, and therefore the mechanics of processing remain as if behind the scenes. However, her understanding is the key to getting a clean edge without chips. The simplest principle is the basis for the work of pendulum saws. The cut is carried out with the direct movement of the saw blade, while the size of the removed fragments depends entirely on the size of the tooth and its layout.

Chips appear due to the heterogeneity of the material being processed, in particular due to the hard crust of the laminated sheet materials or because the fibers of the whole tree have different densities. Chips can form on different sides of the product depending on the shape of the tooth, the feed force and the speed of movement of the working body. When working with a jigsaw, the appearance of chips is caused either by the fact that the teeth tear out large fragments from the wrong side, or due to the pressing of the upper layer, in which it does not cut, but breaks out in large fragments.

The work of the teeth of the circular disk is in many ways similar to a jigsaw, with the exception that their movement is directed strictly in one direction, and they move at a very high speed. Another significant factor is the direction (angle) of the applied force: if the jigsaw saw moves strictly perpendicular to the surface, then the circular cuts at an arbitrary angle, depending both on the diameter of the blade and on the thickness of the part. This can play into the hands: oblique immersion of the tooth contributes to a more accurate cutting of the chips, but rather large fragments can be pulled out from the back side due to the movement of the cutting edges along the tangent. Of course, a circular saw will only be able to perform a direct cut.

See also  Which side to cut drywall

Choice of saw blades and blades

When cutting, purity and processing speed are inversely dependent values. It is worth noting that chips on the slice will appear in any case, so the main task is to reduce their size to such a value that they can be easily eliminated by subsequent processing. The size of the chips will be the smaller, the smaller the size of the tooth and the closer to the right angle at which the cutting edge touches the surface of the material. For the choice of a circular saw blade, these are the two most important factors of the three.

The third can be called the size of the wiring. The offset of adjacent teeth, which is quite simple to determine by attaching a ruler to them. To ensure a clean cut, the wiring should be minimal, but do not forget that in this case, when you try to cut a thick board or sheet of plywood, the disk may be trivial to clamp or the end will burn out from strong friction.

Saw blades for a jigsaw are more diverse. For cutting without chipping, a series of clean-saw files are used, for example, BOSCH has a line of blades called CleanWood. Their main difference is the small size and lack of pronounced tooth orientation. They, as a rule, have the shape of an isosceles triangle and carry out a cut in both directions of movement.

Also, saws for a clean cut differ in the almost complete absence of wiring and the opposite direction of grinding of adjacent teeth. In order to provide the possibility of a figured cut with a small wiring, the files have a very small width, which makes them quite fragile.

For fine cutting of sheet materials can be used and blades designed to work with metal products. These files have the smallest tooth size of the known, so the cut is performed slowly, but with the highest quality indicator. Due to the considerable width of the metal canvases, fine curly cuts can only be carried out with a significant bend radius, on average about 60–80 cm.

See also  How to Cut Cut Porcelain Tiles Without Chips

Note also that the blunting of the teeth, which is characteristic of low-quality files with a “mileage” of 3-5 meters, also leads to the formation of chips. Therefore, do not skimp on purchasing consumables if the quality of processing is really important to you.

Masters of carpentry most often use the principle of finalizing the sole of the cutting tool, which consists in reducing the gap between the working body and the clamping pad. This is almost guaranteed to eliminate the effect of “breaking” the crust in the upper layer of material.

Zero clearance is achieved by fixing the patch plate to the support sole of the tool. The pad has only one narrow hole (or slot) that fits snugly against the cutting organ. Because of this, even with a large feed force, the teeth are guaranteed to cut small chips, and not to turn the chips in the upper layer of the part.

When using pads, it is imperative that they do not scratch or damage the surface of the part. Therefore, most often they are made of a material that is inferior in hardness to the processed one, for example MDF or drywall. Unfortunately, for a long time such an overlay is not enough, because of which it has to be changed every 4–5 meters of cut.

Durable linings can be made of sheet plastic (PVC, fluoroplastic), fiberglass or metal. In the latter case, the surface of the lining must be carefully polished and soft metals such as aluminum or duralumin should be used to reduce vibration.

By the same principle, the back side of the material being cut can be protected. A tape should be glued along the cut line, which will protect against tearing large fragments. Gluing surfaces is one of the few ways to ensure the purity of a figured cut with a jigsaw. Unfortunately, masking tape is not suitable for this due to its low strength.

The best quality cut can be obtained by gluing parts with aluminum or fiberglass reinforced tape. It should be so wide as to cover 15–20 mm on each side of the cut line. The density of the sticker is also important: the tape must be well pressed down with a dry rag swab and by any means possible to prevent wrinkling.

See also  How to cut plywood at home

Tapes with very tenacious glue should be avoided. In the process of tearing, they can entrain small fibers and fragments of the laminated surface, dissected by microcracks, which are formed during cutting. Also pay attention to how easily adhesive traces are removed and whether the adhesion is high enough to work with rough materials like unpolished plywood or OSB.

For most parts, it is sufficient to reduce the size of the chips to 0.2–0.5 mm. Such small irregularities of the edged edge are not striking, if you wish, they can be easily eliminated by removing the chamfer with an emery bar or by glossing with a wax corrector. It is also possible to grind the end with emery paper if sufficient allowance was given during cutting.

Nevertheless, even at home, it is possible to achieve a cut quality comparable to the result of the cutting machine with two high-speed disks. This is possible only when the tool moves along the guide rail, in extreme cases. Along the temporary stop bar.

First you need to make two cuts with a depth of about 0.5 mm on both sides of the part to indicate the thickness of the cut. At the edges of the cut line, you need to scratch two furrows under an even ruler. This is done either with a segmented or oblique shoe knife (for chipboard and uncoated wood), or with a sharpened drill or a winning cutter (for laminated materials).

The depth of the furrows should be at least half the thickness of the outer layer, inhomogeneous with respect to the bulk of the material. This method requires high accuracy in comparing the furrows and the cutting line, but only in this way is it possible to provide a perfectly even cut edge that does not require additional processing.