How to Disassemble a Makita 24 50 Hammer

Even very reliable Makita rotary hammers break down over time. Any breakdown is eliminated, you only need to have straight arms and perseverance.

In addition to electrical malfunctions, rotary hammers are also subject to mechanical breakdowns.

The work of rock drills with solid materials in a dusty environment shortens the life of the machine and requires user intervention to perform preventive maintenance.

Any repair of the tool begins with the determination of the nature of the malfunction and disassembly.

A Makita 2450 and 2470 rotary hammer can be repaired by a user with basic locksmithing skills and knowledge of electrical safety requirements.

To get to the mechanical part of the punch, you need to remove or disassemble the cartridge.

Disassembling the quick-detachable chuck Install the hammer drill on the back of the cabinet on the surface of a table covered with a clean cloth or paper. Using tweezers or a screwdriver, remove the rubber tip 35, item 1. 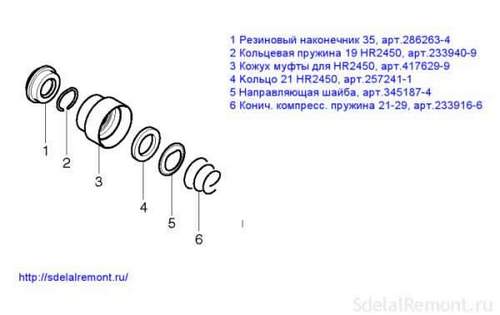 Now you can remove the case of the mechanical part. It is black. Using a screwdriver, unscrew the four screws at the end of the case.

Holding the black case with your right hand, press the end of the shaft from which the cartridge was disassembled with your thumb. The plastic case is easy to remove.

Next, remove the gearbox shaft.

After checking that the electric brushes are disconnected from the lamellas of the rotor, use a screwdriver to pry the metal case of the perforator at the border of the green plastic case.

You get such a mountain of clean details. Now carefully review the details, immediately discard the rubber rings, picking up new ones.

Replace defective parts with new ones.

Repair of the perforator cartridge is done to replace the anther and rubber ring, as well as the conical spring and the steel ball, which provides clamping of the working tool (drill). What does the working tool indicate? namely, the drill is poorly held in the cartridge.

The main reason is the wear of a steel ball 7.0 pos.20, art. 216022-2. Ball wear occurs from contamination of the barrel of the cartridge due to ingress of dust and dirt.

The general view and arrangement of the Makita rotary hammer cartridge is shown in the photo below.

Do-it-yourself makita 2450 rotary hammer cartridge repair is easy to do. The cartridge must be disassembled, freed from old grease, discard rubber parts, replace defective ones.

complex failures require knowledge of the mechanical design of the Makita 2450 rotary hammer.

Having determined the nature of the malfunction of the Makita rotary hammer, proceed to disassemble the mechanical part called the gearbox.

Disassemble the mechanical part according to the attached video. Release it from the old grease. Carefully inspect all parts, their integrity, level of wear. All rubber products during any disassembly require replacement.

Consider repairing a perforator barrel. We will analyze the mechanism completely. Video disassembly, lubrication and assembly of the Makita rotary hammer

Repair of parts of a shaft of the Makita 2450 puncher

Remember! In the lower part of the body, the rotor is held by electric brushes, which must be removed.

It turned out such a dirty knot.

Now you need to separate the shaft of the percussion mechanism.

Most often, rubber rings, striker poses wear out. 24, compressor spring pos. 18. and cylinder parts. Here’s how barrel parts wear out and collapse during improper use of the tool.

Consider the most difficult malfunction. failure of the shock mechanism. The characteristic signs of failure of the impact mechanism is the absence of impact and the unpleasant noise of a working punch in the “Impact” mode.

Such a malfunction is typical for those perforators that during operation were pressed strongly against the work surface.

Having disassembled the gearbox, we remove debris and pieces of foreign objects. We find the defective part and clean everything from the old grease.

Discard damaged parts, replace with new ones, cover with a thin layer of grease. Parts are ready for assembly. But more on that in the next article.

than 50 models of SDS-plus Makita rotary hammers with the lowest prices. Payment upon receipt.

Video: How to Disassemble a Makita 24 50 Hammer

Do it yourself repair of the Makita HR 2450 rotary hammer gearbox. most comprehensive review

I got to my makita HR 2450 puncher, which lost a hit at the peak. There is an internal blow, but to the peak.

DIY punch repair. When it is possible and necessary to repair a hammer drill

The hammer drill always works in extreme conditions. It is not surprising that over time it goes down, both consumer goods models and well-known brands. If the punch is expensive, then you can’t just throw it and run to buy another one in return, and you don’t need to. It’s better to try to repair the punch yourself, and our article will help you with this.

To be or not to be repaired

When you are faced with a choice and decide what to do with a hammer drill that doesn’t want to work at all, think: can you repair it yourself? It is worth undertaking repairs if:

It is most effective to consider a concrete example, which we will do.

Repair of the Makita puncher

This rotary hammer is known for its reliability, but still someday there is a limit to its endurance.

We disassemble our tool and start with a cartridge

To find out the cause of the breakdown, you need to parse the mechanism:

What surprises can await you after disassembling the cartridge? Typical problems are:

We disassemble the switch that controls the choice of operating modes

To perform this operation, a slotted screwdriver 2 mm, having a T-shaped working part:

3. We put a switch in the gearbox, but only partially, otherwise we will not be able to perform the following operation

4. The switch will have to be turned against the clockwork, so that it becomes as it was when we dismantled it. Now he will fully fall into place. If you feel that something is wrong, it means that you have excessively deepened the latch.

5. It remains to scroll the switch clockwise until it occupies the drilling mode, press the latch, make sure that the switch moves as it should to the selected position, and the punch repair in this part is completed. Next we deal with the gearbox.

We repair a reducer

If there is no suspicion that the engine has burned out, then the task is simplified by the fact that we will not dismantle the entire gearbox:

The reason was found and eliminated, now we collect, while:

Here the wizard parses the Makita punch in 5 minutes:

Bosch belongs to punchers with a long service life, but sometimes even the most famous brands have to be repaired.

So, what kind of malfunctions can this puncher have:

The technology, in general, differs little from that used in the repair of other brands of perforators.

The subtleties of repairing a punch video will convey better than any description: