How To Distinguish An Original Makita Screwdriver From A Fake

The main differences between the fake and the original Makita

Makita has gone to great lengths to protect their power tools. Therefore, even by visual inspection, fake products are easy to distinguish. However, this must be done with utmost care.

What to look for:

The case in which the Makita power tool is supplied;

First of all, you should take a closer look at the container. The original and the fake are almost identical in color, but in the latter it may be too bright. In addition, you need to carefully consider the brand lettering. Originally, the name is “Makita“. Embossed and letters are embossed.

On a fake case, the brand name appears as a low-grade sticker or in hand-pasted letters. It is easy to check this. they are simply torn off with a knife, fingernail. Therefore, when purchasing any Makita tool, inspect the suitcase with the tool with extreme caution.

Further, the case latches can give a fake. On the original containers, they have the brand name. “Makita”, and are made of gloss. The rivets on the fake suitcase are nameless and matte.

The gaps that are located on the lid of the suitcase are also different in the original and the fake. In the first, they may be completely absent or have the same shape. In the second case, the gaps of different shapes are made absolutely not of high quality.

IMPORTANT! The backlash of the original is very high quality, without dirt. A fake cannot boast of this.

Close attention should be paid to the back cover of the case. The original ones have the “Makita” brand inscription in embossed white letters. A fake suitcase does not contain this.

IMPORTANT ! Opening the original, you will see that each part has its own production number.

The Makita electrical appliance itself.

Taking the tool out of the case, you need to look at the device nameplate. This is a small table showing device markings, Makita country of origin and other additional information. In fake ones, it literally “eats out” the eyes, which gives out a fake instrument.

The original has a duller Makita lettering. While a fake is straightforward, it cuts your eyes with bright red. Now regarding the markings:

IMPORTANT ! Makita does not manufacture tools in the CIS. Original markings and countries where Makita factories actually exist:

As you can see from the list, original China is designated differently.

INTERESTING: Now on the market you can find “gray” models of electrical appliances. They are original, but not all markings are present on them. The main difference is that such Makita tools were imported into the country illegally. Even in spite of their authenticity, these models are not supported by the manufacturer. Therefore, there will be no warranty repair.

Now you need to look closely at the inscription not in the table, but on the instrument itself. As on the case, the original appliance bears the Makita brand name in embossed raised letters.

The color of the device case is greener than the original, and blue for the counterfeit. over, the latter does not have the manufacturer’s inscription on a black base, the original has it.

Also, you should pay attention to the quality of the plastic parts of the device. In the original, they are made of high quality, even shape, the casting of fake components immediately catches the eye. traces of burst, poor-quality edges.

For example, in original Makita rotary hammers, additional handles of the devices have several inscriptions. One is made by indentation and the other is white. Fake ones do not contain letters at all.

IMPORTANT ! There are such models “Makita” that have a sticker on the body with the name. However, if you tear it off, then under it there will be an indentation Makita.

Makita tools: distinguishing the original from the fake

Japanese Makita electrical appliances are some of the most popular brands on the market. This is definitely a good thing, as the leadership shows the high quality of the instruments. However, there is a downside to the coin. with the growing popularity of “Makita”, the number of cheap Chinese counterfeits increases sharply. Therefore, today we will talk about how to distinguish the original of the Japanese manufacturer Makita Corporation from a fake tool.

Why Makita‘s fakes are dangerous?

By saving on the purchase of a construction device, you are putting yourself in great danger. Fake products do not follow the production technology, so the devices may fall apart during operation and cause harm.

Buy only original Makita appliances and you will forget about problems forever.

How to tell an original Makita angle grinder from a fake

Angle grinder, popularly “angle grinder”, Makita GA 5030 is one of the popular tools. It is bought not only by master builders, but also by ordinary people for personal use at home or in the country. Such an item will always come in handy on the farm.

It is not surprising that with such a popularity of the instrument, a large number of fakes have spread. And all would be fine, but some particularly smart sellers are trying to pass them off as originals. In this case, the price is set as for the original product.

However, the quality of the counterfeit is clearly not up to the real Makita GA 5030 angle grinder. In work, he does not always behave well, quickly breaks down. And not every workshop will undertake to repair a fake.

To avoid such problems, it is better to thoroughly examine the purchased instrument for originality.

This part has a light steel color in the original. In a fake, the gearbox has a gray tint.

On the side of the device there is an inscription “Makita” in bold letters. In the original, it is cast together with the side piece on which it is placed. It’s all one whole. Then the letters are painted with white paint. It can wear off over time. In fakes, letters are often glued on top of the case. Most often they are made of white plastic. In addition, the letters are too large and poorly processed, which makes it difficult for the hand to hold the tool comfortably while working.

So that the wire of the angle grinder does not bend and fray during operation, the place of its connection with the body was insulated with a pipe. In the original device, the pipe is long, made of soft rubber, which does not interfere with turning the angle grinder in any direction. In fakes, the pipe is shorter by a couple of centimeters. It is made of a harder and coarser material, similar to plastic.

The bolts that hold all the parts of the original angle grinder together are also hardened and black. In fakes, all bolts are light.

READ  How To Remove A Drill From A Screwdriver

The bearing in the original device is protected by a black piece. In a fake, the same part is made of nickel or chrome. light.

The main differences of the original Makita GA 5030 angle grinder from the counterfeit in appearance:

Original parts are black. Because they are hardened at high temperatures.

The original nut and flange are dark in color

If you remove the back black cover of the angle grinder, you will see the following differences:

The switch button in the original device is black, and in the fake it is dark beige;

The original Makita GA 5030 angle grinder weighs 1.4 kg. Fakes are usually a little heavier. And the color of a fake case can be brighter and lighter than the original.

These tips will help you navigate the instrument market. And to be sure of the quality of your purchase, it is better to go for it to the official representatives.

Especially on the eve of the holidays, the Internet begins to “dazzle” with advertisements for the sale of various models. How can you identify a fake?

First of all, we pay close attention to the case itself. In the original, it has a blue-green color with a three-dimensional logo. For fakes, the logo is either pasted or painted.

How to distinguish an original Makita screwdriver from a fake. Packaging

It is also worth paying attention to the instructions and the passport of the device. The original tool is accompanied by passports for the screwdriver itself, the charger, as well as a manual in English and Russian from the Makita brand, and a quality certificate. 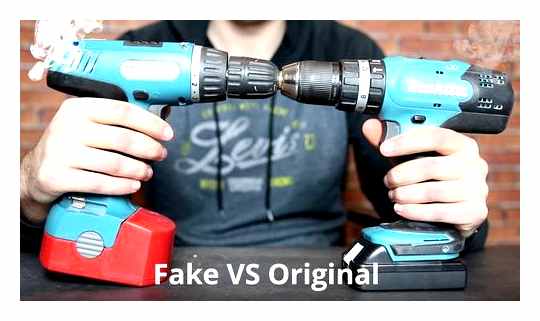 The complete set of a fake, at best, will be limited to instructions in a foreign language without indicating the brand of the instrument.

Makita does not complete its drills and screwdrivers with two-sleeve chucks.

Before purchasing, check the voltage of the selected model on the manufacturer’s official website. For example, the Makita 627 model has 12 volts in all configurations. Fakes are often labeled 14 or 18 volts.

The original has it durable, shockproof. For fakes. fragile, with roughness.

The original latches always have a logo, which cannot be said about the replica.

The original has Japan, USA, China or Romania. Fakes have Malaysia.