How To Install A Protective Cover On The Trimmer

I want to devote today’s article to the sore topic of summer residents and gardeners of the entire post-Soviet space “How to refill a fishing line into a trimmer.” Not many trimmer manufacturers answer this question in their operating instructions. Therefore, it is difficult for ordinary gardeners to figure out how to do this correctly.

So, trimmers are electric and gasoline. The cutting element of the trimmers can be a fishing line and a knife. The fishing line is ordinary, four. Pentahedral and intertwined (in the form of a pigtail). Knives come in 2, 3 and four blade blades. Knives are also plastic and metal.

The feed system of the fishing line from the trimmer is manual, semi-automatic and automatic.

Development engineers who create new models of trimmers clearly calculate the diameter (thickness) of the fishing line and the number of knife blades according to the power of the trimmers. Otherwise, the engine is overloaded, which as a result leads to its breakdown. And this is an additional and significant cost.

Today on the market are trimmers:

Our Kulibins long ago learned to improve any mechanisms. So, for example, some gardeners make successful, in their opinion, replacing the fishing line with a metal cable, or fishing line. But at the same time they do not think about the safety of their and their loved ones, because, as a cable with the power of a working trimmer, it can easily break out and not only injure the mower and others, but leave it crippled for life. Using fishing line can and gives a better effect, I have never personally tried it than fishing line for trimmer, but this work has a number of inconveniences: when it comes into contact with solid objects it dissolves or can simply be pulled out of the reel without limit.

So what is called closer to the topic. I give an example of how to fill a fishing line into a trimmer (BOSCH Art 30 trimmer). Everything is very simple. We started.

Cut off and start winding.

The amount of fishing line should be such that the protective cover of the reel closes and the line on the reel unwinds itself a little.

The second end of the fishing line is planted in the hole on the protective cover.

We put it all on the trimmer. Turn the coil clockwise until it clicks.

Secured. Now connect the trimmer to the network. We put the trimmer in the starting position for the job. Turn on the trimmer. The excess length of the fishing line will be cut off on the cutting blade.

You can watch the

It is stored at the top of the trimmer body.

Such a coil is attached to the trimmer as well as a reel with ordinary fishing line.

Repairing the petrol trimmer starter may be necessary at the most inopportune moment. In this case, there are two ways to solve the problem: replace the broken part or change the entire assembly. The latter option will cost more. To repair the device with your own hands, in most cases you will need from the tools only a screwdriver with the appropriate tip. Repair work does not take much time and does not require special knowledge. It is enough to know the device, the principle of operation, the nuances of the assembly-disassembly of the starter on the trimmer to achieve the desired positive result.

Gas engine. This, in principle, is the main part of lawn mowers. Its power lies in the range of 0.5-2.5 hp. The movement from it is transmitted to the shaft located inside the hollow rod, and then through the gearbox, consisting of gears, already a fishing line or knife (working body).

Also, the lawn mowers have the following elements:

All details of the lawn mowers are presented in the photo below. 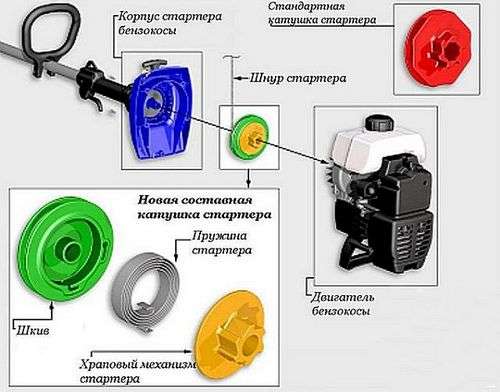 The starter on the trimmer is an integral part that starts the engine into operation. It is depicted separately in the two photos below.

Starter mechanisms of various lawn mowing models work on the same principle: during the start of the internal combustion engine, the protrusions marked with the number 1 in the photo above enter the hook with the dogs 3. When the engine starts to work, they return to their previous position due to the action of centrifugal force. A similar role is also played by wires 2.

The process of returning to the initial position of the mechanism elements occurs due to the presence of a spring wound around an axis. It unfolds when the rope is pulled. After releasing the cord, it is retracted and wound due to the folding of the spring. During the start of the ICE lawn mowers, the trigger mechanism rotates its shaft until it starts to work (starts).

It may happen that the starter mechanism is accidentally broken. The consequences will be deplorable if a tattered rope is wound around the flywheel of an operating ICE: then the spring will burst, the pulley will rip off. But such cases when a complete replacement of the starter assembly is required are extremely rare. In most cases, to fix the mechanism, it is enough to put a new spring or replace the cord.

Disassemble the start-up mechanism in order to install new parts instead of broken ones in the following sequence:

To change the spring, work should be carefully and accurately: it can accidentally burst under the influence of the force caused by putting it in place. Even if you carefully remove the roller, the spring band flies off the reel very quickly and can injure your hand with its sharp edges.

After installing the spring, tighten it. To do this, perform the following steps:

It is not difficult to assemble the starter on the trimmer and wind the spring, only this should be done carefully and with caution. For different models of lawn mowing, the failures of the starting mechanisms are the same, therefore they are repaired in a similar way. There are some nuances associated with their design features.